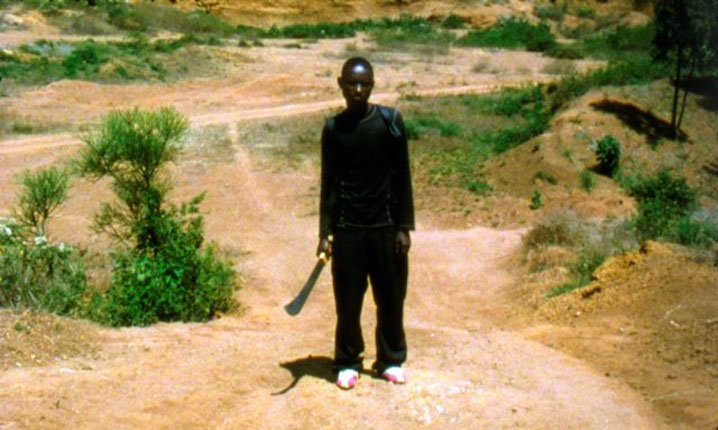 The dream of the lightweight camera is to be able to go anywhere and capture any image. Of all the dreams films and film production have provided us with, it's the one we've followed through the least. The transition from the Arriflex to 16mm to Super-8 to VHS to the MiniDV camcorder and then to HD is for the most part the story of the filmmaker traveling inward. The logic seems to go that, if you have a camera that could fit into a piece of carry-on luggage, why would you ever leave the house? There are lots of other traditions that should stop an American filmmaker from making a movie like Munyurangabo: that over-confident fear that they might come off as colonialist (as though they themselves were capable of subjugating a people); that patronizing worry that they'll tell "the people's story right." It’s good to worry – every director should – but you have to hope that directors will find something better to worry about than how their movies might be "read." Anyway, none of these things matter to Lee Isaac Chung. Chung isn’t interested in the difference between action and imagination, either. Nor is he interested in distinguishing between the real, the idealized, the mythic, between dialogue, story, song and nightmare, between life and death. Or between walking and talking. He isn’t interested in whether it’s a landscape that’s beautiful, or whether the beauty lies in driving past it with the sound of the wind in your ears, even though you would have to go to Boetticher to find landscapes as primal as his and even though the wind he’s recorded is the most beautiful in cinema. Really, all that he cares about is another, even older dream – the dream of Vidor, Murnau and Fejos of cinema as the Most Human Art. Chung went and made a movie in Rwanda because it was possible and because he cared, and that's as good a reason as you can find for making a movie.

Two rode together: teenagers Sangwa (Eric Ndorunkundiye) and Ngabo (Jeff Rutagengwa) are hitch-hiking. They stop in at the home of Sangwa’s family; he hasn’t been back in three years. They tell the family that they’re on their way to find work. Sangwa’s mother (Narcicia Nyirabucyeye) wants him to stay; his father (Jean Marie Vianney Nkurikiyinka, as terrifying and somnambulant as Conrad Veidt), a recovering alcoholic, wants to berate him. Sangwa asks Ngabo if they can stay a little longer and help hoe the fields. “Did you forget that we’re on our way to kill a man?” Ngabo asks. In his backpack is a stolen machete, heavy like a gunfighter’s revolver.

Killing is easy if you close your eyes. Making movies, too. But of course there's a whole world (and it isn't getting any smaller): there are the verdant greens of the countryside; the threat of disease; the way a mother wipes milk off of the mouth of her grown son, and the way she has to tell his friend that there's no food today; a man (Edouard B. Uwayo, Rwanda's poet laureate) reciting a poem. There's a bit of Nick Ray, especially Wind Across the Everglades,as interpreted by the Jim Jarmusch of Dead Man and The Limits of Control. These are the pieces, the basic elements of Munyuarangabo, but they don't even begin to relate the beauty of this deeply human film. "Human," which is often the opposite of "personal." Chung, an American from Arkansas, served as his own cinematographer and editor, heading a small local crew and shooting on Super 16mm; the film is certainly his project, but it's not about him. It's not a humble film, either. Ngabo is a Tutsi among Hutus, but it only matters as much as Front Populaire does for The Crime of Monsieur Lange. When Sangwa and Ngabo argue, it’s true that it’s about their ethnicities, but the details are nothing compared to the humanity of the argument. One of the most dangerous, beautiful things cinema can do is put the word “mere” in front of “politics” or “history.”