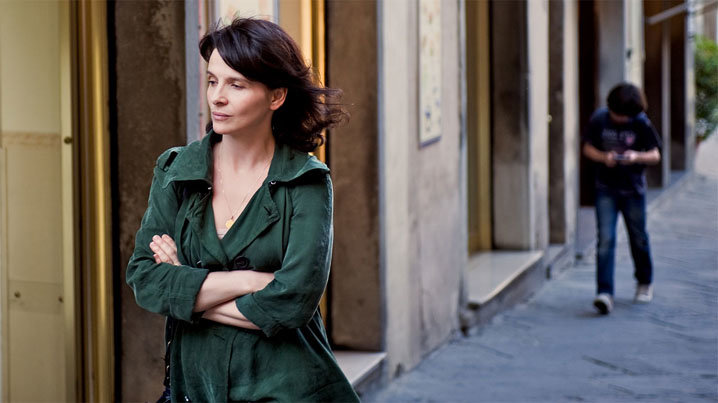 "An astonishingly multilayered portrait of a romantic relationship that doubles as a commentary on the value of reproductions — and, thus, the cinema itself — Certified Copy finds Abbas Kiarostami returning triumphantly, after years of DV experimentation, to the realm of narrative filmmaking," begins Nick Schager. "From conversational scenes set inside a car to discussions being interrupted by pesky cell phone calls, Kiarostami's hallmarks remain intact, as does his gift for canny, intricate plotting. In this instance, that concerns the apparent first-time meeting between French art dealer Elle (Juliette Binoche) and English novelist James (William Shimmel), whose latest philosophical book contends that artistic copies are the equal of their originals, and that an object's meaning is altered by one's perception of it."

In Reverse Shot, Damon Smith reminds us that the "opaque dividing line between fiction and documentary is a theme that has interested the Iranian director since his 1990 landmark Close-up, a re-enactment of an actual incident in which a movie-mad bookbinder fooled a wealthy Tehran family into thinking he was the acclaimed filmmaker Mohsen Makhmalbaf, starring the real people playing themselves. Further creative redefinitions of the documentary form and cinematic truth inflect the narratives of Through the Olive Trees (crew members playing themselves; nonactors reprising prior roles) and The Wind Will Carry Us, which wryly questioned the position of the filmmaker himself as a master manipulator. For Certified Copy, Kiarostami has cast two professionals — an English opera star and a well-known Continental actress — in a scenario wholly removed from real-life events. Gone is the emphasis on the fluidity of narrative and nonfiction techniques deployed so splendidly in Ten's dialogue-driven passenger scenes, as well as the idea that embedding everyday life in fabricated art can provide insight. But the director's longstanding interest in the ethics of deception (Sabzian's fraudulent identity theft in Close-up, for instance) and the artifice of cinema (Kiarostami's frequent on-camera appearances as himself, such as in the epilogue to Taste of Cherry) remain central, fueling the film's playful humor and fundamental elusiveness."

Miriam Bale in the L: "It's been posited that Kiarostami's latest film, about a man and woman who may or may not be married traveling through the Tuscan countryside, is a deliberately, nose-thumbingly irresolvable puzzle, that there are several possible readings, all with dangling ends that don't connect. I disagree. There is one complicated and connected story, the story of a marriage that renews itself through effort. It is the standard screwball comedy story, or what Stanley Cavell called 'The comedy of remarriage.' As he described these films, like The Awful Truth and Philadelphia Story, 'In classical comedy people made for one another find one another; in remarriage comedy people who have found each other find they are made for each other.' This follows that same arc, except it is a trilingual European drama, an existential screwball comedy or, actually, a drama of remarriage."

Glenn Kenny floats a different theory, but first: "There are little bits that appear to be allusions to Antonioni's La Notte and Rossellini's Voyage in Italy, but a big clue to what the film's really about, or what I think it's really about, comes when Binoche's character approaches a couple of French tourists to consult on an aesthetic question (in one of her many attempts to show up James's theories).... The germane point is that the male of the couple is played (with terrific bearish drollery and sympathy) by Jean-Claude Carrière, the great screenwriter who collaborated with Luis Buñuel on all of his films from Diary of a Chambermaid in 1964 to Buñuel's last, 1977's That Obscure Object of Desire. In Desire, two actresses, Angela Molina and Carole Bouquet, played the same woman, Conchita. Here, Binoche and Schimmel, while never changing their bearings or appearances (except that Binoche's character does put on lipstick and earrings in a restaurant bathroom before one exchange), seem to be incarnating different characters at different times... [B]etween its intellectual matter and its emotional content and its weird, unsettled senses of both actuality and identity, the film strikes me less as in the tradition of the Rossellini and Antonioni pictures and more like a more anguished cross between Ruiz's The Hypothesis of the Stolen Painting and Buñuel's Obscure Object."

In the Critic's Notebook, Martin Tsai responds to Glenn: "In other words, Certified Copy plays out a bit like a romantic comedy directed by David Lynch with its distinct two-halves connected by a thread."

Ed Gonzalez in Slant: "This is a film whose slyness derives from its flabbergasting sense of framing, overlapping visual textures, and ever-peeling layers of thought, so that from moment to moment — no, shot to shot — there's this dizzying sense that the characters are at once talking to themselves, their maker, and the audience that beholds them. And as in a scene where She, sitting inside a restaurant, looks out toward the street at a couple celebrating their nuptials, or perhaps at her reflection in the mirror, or perhaps us in the audience, one gets the sense of Kiarostami's own image as a sort of mirror, one that reflects, exposes even, our deepest anxieties and wants.... I feel haunted, elated, enriched by his wily and impassioned view of relationships as bodies in constant flux, of disagreement and individuality, and of the transformative power of a simple, sincerely felt timeout in a moment of bitter crisis, such as a tender hand on a shoulder, to remind a lover, however scorned, that they are still loved."

"The movie is a sensual and intellectual delight," writes the New Yorker's Richard Brody. "Kiarostami's calmly confrontational images play ravishingly with light, shadow, and reflections, and the actors virtuosically shift language and tone to match the director's sly comic timing."

"Kiarostami's latest invites comparisons to easily identified forebears (Resnais's Last Year at Marienbad and Rossellini's Voyage in Italy, among others), yet it never seems derivative," writes Keith Uhlich in Time Out New York. "One thing is certain: The writer-director has graced us with a masterpiece."

For Tom Hall, the film "fits squarely in the European absurdist tradition (you could easily see Jacques Rivette hitting this story out of the park in twice the time) that reminded me of the early work of Samuel Beckett; the film echoes Beckett's desire to illuminate human suffering in a world that we can never really understand."

"As in Kiarostami's segment for omnibus film Tickets, any sense of incremental progress achieved through the speakers' respective concessions or sense of agreement inherent in their conversation is just a pleasant illusion," writes Simon Abrams for the New York Press. "Moving in place is the key."

At the House Next Door, Aaron Cutler warns that "Certified Copy is best seen cold. However, discussion of it requires spoiling elements. If you have not seen it yet, do not read this piece. Just know that the film is incredible." New Yorkers will have the chance to see the film first, then, tonight and Sunday morning.

Earlier: The Cannes roundup and Daniel Kasman on three "beautiful things" in the film.

Update, 10/4: "It is hugely satisfying to see how Kiarostami weaves his career-long obsessions and filming techniques into an entirely new type of film for him," writes Marilyn Ferdinand. "Certified Copy is one of the most ingenious and thought-provoking romances you're ever likely to see."

Updates, 10/5: For Michael J Anderson, Certified Copy recalls "foremost Roberto Rossellini's fluid, epochal examination of marital stress and miraculous renewal, Viaggio in Italia (1954), a film whose influence on the director has been crystalline since Kiarostami invented his own moving vehicle idiom in the early 1990s; the early 1960s period work of the former's high modernist countryman and direct artistic descendant, Michelangelo Antonioni; and finally, but certainly not least of all in terms of resemblance, Alain Resnais's parable of uncertainty, Last Year at Marienbad (1961)."

In the London Review of Books, Michael Wood just finds the whole thing one big embarrassment for all involved: "Whether these are strangers playing at being married, or a couple playing at being strangers, or a pair of people, married or not, playing or not, who can only parody themselves, lock themselves away in the picture of the person they have become, why are they so hopeless at doing it? If we take the bad acting and bad writing as a directorial choice or risk, a form of extreme mimesis, what are they saying to us? That people in general are just not very good at being people, at being anything as coherent as a self, and that the writer's slogan is entirely wrong?"

Update, 10/10: Certified Copy "can be seen as an attempt to correct the mistakes made by Shirin," argues Jonathan McCalmont. "It is a film that engages and struggles with the unsurmountable difficulty of achieving artistic authenticity, but it does so from within the context of a story that feels both horribly and beautifully real.... The beauty of Certified Copy lies neither in its elegant and moving portrayal of a relationship crisis, nor in its intriguing deconstruction of many of the conceits of so-called cinematic realism, but in its ability to pursue both of these aims at the same time by layering them in such a way as to attempt to produce something, to re-use Barthes's terminology, that trembles with existence."