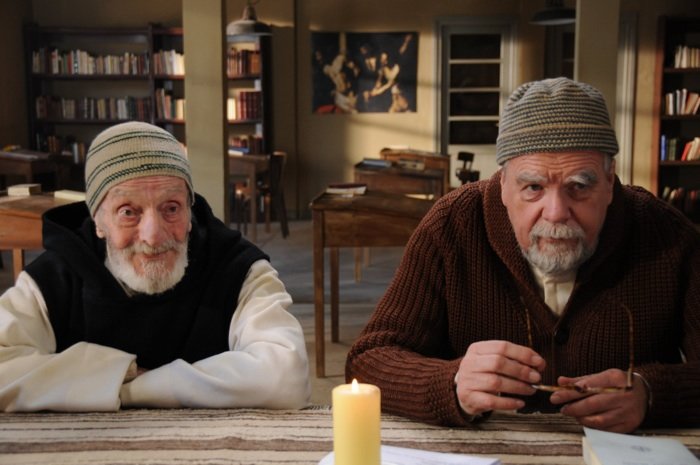 Neither a searing, transcendent masterwork nor a mere sampling of French cinematic vin ordinaire, Xavier Beauvois' latest feature is a scrupulous, intelligent, engaging and sometimes quite moving account of what some might call inadvertent martyrdom. This is a story based on an actual event, that being the 1996 deaths of seven Trappist monks during Algeria's civil war. These men of the monastery of Tibhirine had elected to stay put as the conflict worsened and the extremist insurgents became known for killing civilians for violation of Sharia law. They were beheaded under circumstances that remain obscure; they might have been killed by their ostensible captors, or by the Algerian army itself. This lack of clarity with respect to the historical record leads to one of the film's few arguable missteps, a visually beautiful final shot that injects an odd note of the mysticism this extremely respectful film had been very respectfully skirting during most of its prior running time.

Because it is one of the film's more interesting features that its treatment of faith is kind of, well, materialist. The very meticulous first half-hour of the picture details the quotidian routines both of the monks and the residents of the village they service. And these fellows do do service; the monastery's doctor, Luc, played by a magisterially stooped and compassionate Michael Lonsdale (one wryly recalls the rather more forbidding and sinister priest he played nearer to the beginning of his career, in Orson Welles' 1962 The Trial) is a very busy and tired man. The head monk, Christian (Lambert Wilson) is intimately involved with the people around him and entirely respectful of Islam, a student of the Koran, in fact, one infers. The film unhurriedly steeps us in a sense of place. It's worth noting, incidentally, that the place is never spelled out with a subtitle or title card as is the custom in many Hollywood films. I do enjoy seeing helicopter shots of the Washington Monument accompanied by a readout "Washington, D.C.," don't you? The downside of this in the case of this film being that quite a few of my colleagues confessed that for a long while they were under the impression that the film was taking place in Afghanistan, and that the bearded extremists running around with automatic weapons were Taliban members. Which they weren't. Taliban fans, maybe. But not members. In any case, learning that we were instead in Algiers (pay attention to the letterhead on the sort-of expulsion order a diplomat hands the monks later in the film; also, the allusion to colonization in that scene's dialogue!) constituted what some might call a teachable moment. In any event, the landscape is quite a bit different—greener, overall, for one thing—than Afghanistan's, and Caroline Champetier's excellent cinematography is particularly seasonally-sensitive.

Once the trouble starts coming, the monks understand pretty quickly that it's should-we-stay-or-should-we-go time, and some of them are pretty definite on the go side. "I didn't become a monk to become a martyr," one of their number states, one might believe quite reasonably. But the line reminds us that there was a time that when to follow Christ and his teaching was to invite martyrdom, and regardless of how one might regard issues such as fundamentalist/extremist Islam or what the French leftist journal Liberation called the "unctuous paternalism" represented by the monks and their presence in Algeria, it is sobering to be reminded that we live in a time where once again such a circumstance is imminently possible/probable. Or has this always been the case, and we're just not aware? One of the things that makes a film such as this valuable is its ability to make us ask such questions about ourselves and our experience/knowledge of the world we like to believe we're relatively informed about.

But such considerations come into play only after the immediate drama of the piece settles in. The deep conviction embodied by Wilson's Christian eventually seeps into the souls of the more skittish monks. Not before the frightened villagers make clear their deep need for the monastery's presence. Several of the residents go into some detail on how the monks made their current, relatively placid (up until now) lives possible. When the metaphor of birds perched on a branch is bandied about, a woman of the village corrects one of the monks: you are not the birds on the branch, she says to him; you are the branch. The film is finally about how these men come to accept that state. There's no Bressonian moment of grace; nor is there any road-to-Damascus blinding light moment of the sort one might associate with a biblical epic by DeMille or Stevens. Instead, there is a gradual solidifying, a taking-root, accompanied by incidental pleasures, sorrows, and ironies. As when Lonsdale's Luc recalls Pascal's observation that evil is never more cheerfully accomplished as when it's done in the name of religious conviction. "Unctuous paternalism" aside, the good that the characters in this film do is both thoroughly tied in with religious conviction yet somehow stands apart from it.