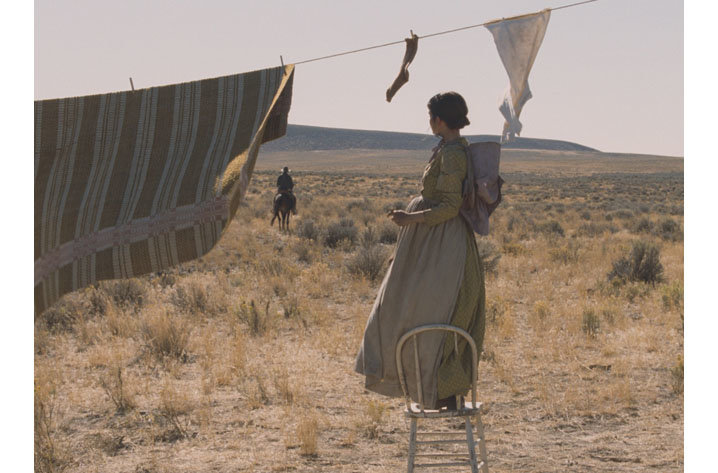 "Meek's Cutoff is an act of inversion, a western that reverses the genre's traditional forms and dynamics to create something new and startling, yet still familiar." On Slant's 4-star scale, Nick Schager gives this one 3.5:

"Kelly Reichardt's follow-up to Wendy and Lucy reteams her with Michelle Williams for a tale of frontier suspense, albeit the type fostered by eerie silences, imposing environments, barely overheard conversations, and intensely inquisitive gazes. At nearly every turn, Reichardt deliberately upends conventions: Rather than expansive widescreen, she shoots in a boxy Academy-standard 4:3 aspect ratio that turns the vast Oregon plains claustrophobic; instead of expressive close-ups that capture frontiersmen and women's tumultuous conditions, she opts for medium and long shots that keep her subjects at a distance; and in place of gunfire-peppered narrative momentum and relatively clear-cut good-versus-evil characterizations, she slows her material to a crawl and drenches her action in ambiguity, to the point that the entire affair quickly becomes engulfed in literal and moral/spiritual haziness. The effect is to situate the proceedings in a disorienting alternate-movie universe, one that evokes the westerns of the 40s and 50s, but exudes the languorous introspection and vagueness of modern art-house cinema, a hybridization that, in most instances, invigorates Reichardt's latest portrait of those on the hardscrabble margins, struggling against human and natural impediments to survive."

Scott Foundas in Cinema Scope: "'A road movie without the road' reads, in part, the tagline to Kelly Reichardt's debut feature, River of Grass (1994), a screwball neo-Breathless about a bored housewife and a hapless momma's boy on the run for a crime they only think they've committed, going nowhere fast. If one doesn't typically look to throwaway ad copy for its piercing critical acumen, it's nevertheless worth noting that the notion of a roadless road movie applies equally well to Reichardt's subsequent Old Joy (2006), Wendy and Lucy (2008), and now Meek's Cutoff, in which the characters travel the mighty Oregon Trail but more often than not seem to be moving in circles. That the year is 1845 means Meek's Cutoff is Reichardt's first foray into period storytelling; it is also her first film made in 35mm and with a seven-figure budget. Those factors, plus the presence of a name cast, will doubtless lead to certain pronouncements that Reichardt has made her 'breakthrough' or 'crossover' movie, no matter that such considerations are virtually meaningless when applied to Reichardt, who was long ago courted by — and washed her hands of — the Hollywood machine, and who seems as untroubled by considerations of box office or industry accolades as any filmmaker at work in the US today."

Henry Stewart for the L: "Welcome to scenes from the hardscrabble frontier: fording a river in silence, slow wanderings through desert-like landscapes (also in silence) that start to evoke Gerry. Indeed, the assistant camera operator on that Gus van Sant movie, Chris Blauvelt, serves as cinematographer here, crafting painterly fullscreen images that conjure up a swath of art history: daytime looks like the world of Andrew Wyeth, with its angular compositions and blond grasses. Nighttime evokes Rembrandt, with its naturalistic, starkly sourced light."

So, 1845, a party heading to Oregon. Tom Hall: "Having hired a pithy, bullshitting guide named Stephen Meek (Bruce Greenwood) to get them there, the film joins the trek just as things are starting to get desperate; Meek clearly has no idea where he is going and, as the party's frustration mounts (and the realization of their dilemma sinks in), their decency prevents them from challenging Meek publicly, instead focusing their collective energy on the task of constantly moving forward without too much complaint. Why follow Meek? Well, there are Indians in them there hills; the specter of the unknown imposes a mute acquiescence on the party and, adrift in the Oregon High Desert, they defer to the hope that somehow, Meek will get them through. When Emily Tetherow (the perpetually outstanding Michelle Williams), Meek's most outspoken critic, has an encounter with a Native American Cayuse man, Meek tracks him down and brings him back to the group as a prisoner. Soon, having defended the Cayuse from execution at Meek's hand, Emily places her trust in the outsider to help them find their way to water, to safety, to hope." All in all, an "apt description of the nation in the wake of the Bush Administration and the divisive political landscape of the Obama Presidency. Reichardt's metaphors are clear, including the role of the Cayuse man as a cipher, the 'other' through which the certainty of the community is thrown into doubt; is he the party's hope (Obama reference intended) or is the prisoner, representative of an incomprehensible world beyond the frame, leading them to death at the hands of his tribesmen? Thankfully, like all great stories, the metaphor does not outweigh power of the narrative."

"Because we are kept so much outside of these figures psychologically, the resolution to this tug of war as it is depicted in its final scene fails to muster up any sense of dramatic weight whatsoever," finds Kenji Fujishima at the House Next Door. "I can't help but wonder if, at a certain point in conceiving this project, Reichardt allowed the allegorical to overwhelm the human — if these characters were conceived at the start as tentpoles rather than characters, and if the film's skillfully rendered aura of psychological impenetrability is actually an attempt, however unconscious, to cover for a failure on the filmmakers' part to fully imagine these people as living, breathing human beings."

Back from Toronto, Girish Shambu dubs Meek's Cutoff "Best-Of-Fest." Speaking of which, earlier: Reviews from Venice and Toronto and notes from Boyd van Hoeij and Daniel Kasman. Screens tonight and tomorrow.

Update, 10/9: "Throughout the past century of cinema we've seen parched earth, looming hills, and endless skies in everything from John Ford's magisterial Monument Valley to Terrence Malick's 70s-era Dust Bowl cine-poems to Paul Thomas Anderson's desert-as-desiccated-soul in There Will Be Blood," writes Matt Connolly in Reverse Shot. "But the expanses of the southwest have never felt quite the way they do in Kelly Reichardt's Meek's Cutoff, at once a summation of and an evolution in the director's depictions of the American landscape — indeed, in her filmmaking overall.... The landscape is desperate emotion, and it is brutal fact. And while I wouldn't go so far as to call the film 'dreamlike,' there are moments of such disquieting wonder and mystery that they approach the uncanny."