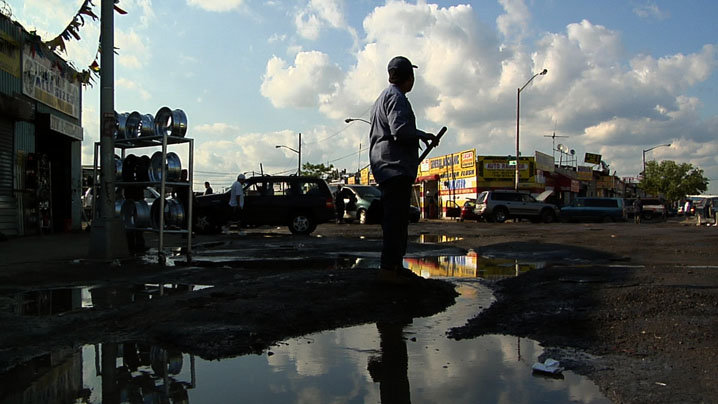 "A deserving winner of the Best First Feature prize at this year's Locarno International Film Festival," begins Adam Nayman in Reverse Shot, "Verena Paravel and JP Sniadecki's Foreign Parts was produced with the support of Harvard's Sensory Ethnography Lab — the same department that produced Lucien Castaing-Taylor and Ilisa Barbash's Sweetgrass (Castaing-Taylor is the program's director). There are no sheep in Foreign Parts, but its relationship to the earlier film is unmistakable: not only in the sense that Sniadecki and Paravel favor an immersive yet unobtrusive documentary style, which eschews narration or contextualization, but also in its focus on a long-standing yet vanishing professional community."

"[Y]ou might think you were watching scenes from another country," notes Manohla Dargis in the New York Times. "But the man singing in Spanish and the guy letting automotive waste gush into the mud are in Willets Point, right behind Citi Field in Queens. Made over 2008 and 2009, this largely observational documentary takes a close, intimate look at some of the men and women who work and even live amid the various auto-body shops and junkyard piles. In other words, it puts a human face on the people, who, if the city's huge Willets Point redevelopment plan goes through, will be displaced and possibly once again forgotten."

It's "a work of salvage anthropology that never insists on any particular kind of political stance until after the full reality of what they've recorded and subsequently edited has settled in," writes Robert Koehler in Cinema Scope. "Nearly everyone in front of Paravel and Sniadecki's camera is far too consumed with work and/or survival to spend time fighting City Hall's big plans, and the one guy who does — crusty, loud-mouthed 76-year-old Willets native Joe Ardizzone — shows up for meetings that fail to happen and doesn't even own a personal computer.... Willets is a place that the city has forgotten, and rather than indulge in a project benefiting [NYC Mayor Michael] Bloomberg's developer allies (and who have long constituted a significant portion of his political support), local government would do better to invest in infrastructure and basic public services for an area inhabited mostly by immigrants that more closely resembles a working-class barrio in Mexico City or San Juan than anything associated with the US. (For a precise reference point until you're able to watch Foreign Parts, look at Ramin Bahrani's 2007 film Chop Shop, filmed on the same fascinatingly photogenic street.)... Willets Point's issues are America's issues, starting with how the country has blithely allowed its poor to go straight down the shitcan."

Ed Champion finds that "while Foreign Parts does a fair job at portraying life without commentary, it doesn't give an outside observer the full picture of Bloomberg's avaricious intent until the very end — a rather strange choice, considering its obvious though admittedly mild subjective position." He's also got a recording of the press conference.

"Paravel and Sniadecki themselves drift in and out of the film," notes Tom Hall, "always willing to concede the presence of the camera and the artifice of filmmaking, but the generosity of the film's subjects makes this seem less like an intrusion and more like an open invitation toward an honest acknowledgement of the community's dilemma, a way for the filmmakers and audience to find themselves developing an investment in the fate of Willets Point."

"The longer you watch these locals stumble and hustle, the more you mourn this broken-down neighborhood's inevitable demise," finds Time Out New York's David Fear.

Update, 10/11: "Perhaps it's a stretch to refer to a wall of car mirrors as a beautiful sight," writes Chris Cabin at the House Next Door, "but this beauty is also inherent in the touching, delicate romance between two homeless people and in the filmmakers' relationship with one particularly boisterous beggar. The empathy and love the filmmakers have for these people, who still summon joy despite the fact that they are teetering on the edge of financial oblivion, comes to blossom when the beggar dances with Sniadecki's camera in a small, local deli."