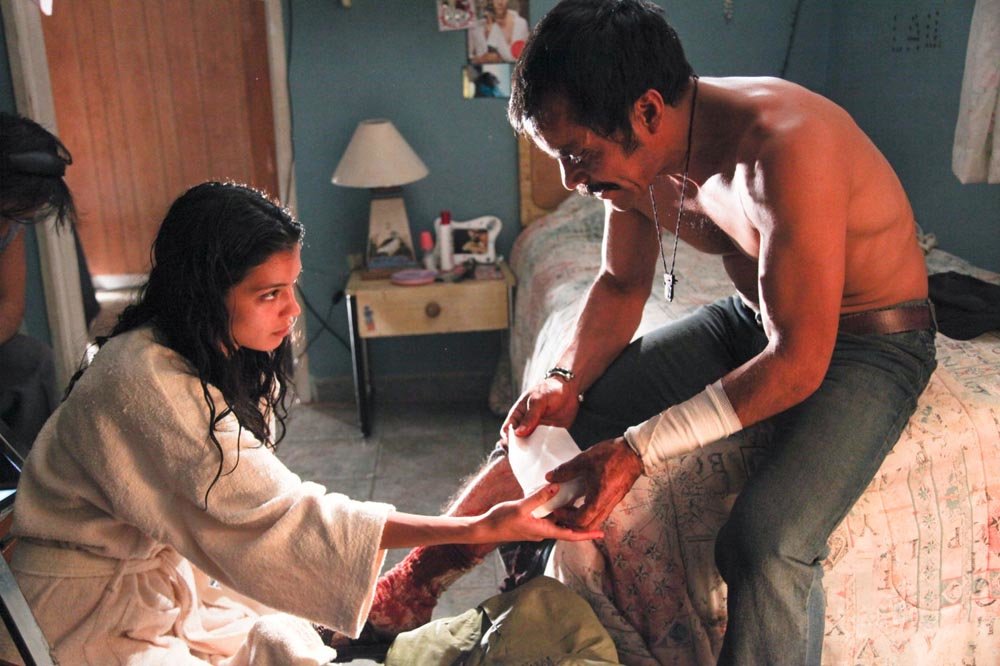 In the wake of the raves that met the premiere of Gerardo Naranjo's Miss Bala in Cannes, some of the reviews coming out of Toronto and New York may come as a surprise. First, though, Scott Tobias sets it up at the AV Club (grade: A-). "Stephanie Sigman stars as a Tijuana teenager who dreams of becoming the next Miss Baja California. Be careful what you wish for. At the wrong place at the wrong time, she witnesses a nightclub ambush by a drug gang; when she tries to go to the police to inquire about a missing friend, a corrupt cop delivers her right to the gang's vicious leader, played by Noé Hernandez. In a plot rife with dark ironies, Naranjo posits Sigman as the stand-in for ordinary Mexican citizens left powerless by drug cartels on one side and a compromised police force on the other…. Though it toes a delicate line between exploitation movie and movie about exploitation, that's part of what gives the film its charge."

Walking in, Farran Nehme thought she might be in for a thriller, but instead found herself watching "an extraordinarily bleak social drama that happens to feature suspense and a great deal of violence…. While it has the propulsive drive that comes from outrage, Miss Bala is what they call a hard sit."

"Unlike Terri, the latest, most commercial venture from his friend and AFI schoolmate Azazel Jacobs, Miss Bala doesn't sublimate Gerardo Naranjo's strengths into a commercially viable package," proposes Phil Coldiron in Slant. "[I]t forces us to completely reconsider everything we thought about him as a filmmaker. In contrast to his first two features, small things that tended to bring out descriptors normally reserved for children and puppies, Miss Bala is unabashedly powerful, a film where every shot chokes on its own urgency…. Where Drama/Mex, which reworked Alejandro González Iñárritu and Guillermo Arriaga's usual bullshit into something slight and worthy, and I'm Gonna Explode, which lifted wholesale from the Godard of Pierrot le fou to express the social anxiety of Mexican youth today, seemed at the time examples of a director aware of the freedom afforded by youth to indulge his influences, Miss Bala, a mature film in every sense, continues this pastiche style, lifting primarily from Brian De Palma's long takes and Michael Mann's ideas on sound to package a social-problem film as a Hollywood actioner that could have been made any time in the last 30 years." And there's more; final grade: 1.5/4.

"Miss Bala undoubtedly has a point to make: that the drug war, if you hadn't heard, is bad news." Adam Nayman for Cinema Scope: "Throw in the fact that so much in Miss Bala feels like a demonstration of its maker's virtuosity, and you have a film that, while superficially totally of a piece — it's shapely, as they say, and filled with visual and dramatic rhymes — leaves a viewer feeling at odds. Naranjo's craft is to be admired, and, at least theoretically, so is his commitment to social critique. I worry, though, where those things — and the inevitable critical and possible commercial success of Miss Bala — might take him."

At Twitch, Peter Gutierrez finds it "disappointing to see so many middlebrow concessions in a film with the power and conviction to be so decidedly non-brow."

The L's Mark Asch: "Naranjo, by many lights one of the world's rising filmmakers, seemed effusive, intelligent, and genuinely concerned at his press conference — his film is certainly thoughtfully conceived, and so well-made, but as often happens when a filmmaking virtuoso takes it upon himself to dramatize horrible inevitability and victimhood, the lingering impression is that everything is happening this way not because things in Mexico are hella fucked up right now, but rather that we might be awestruck by the doomy gravitas with which everything fits into place."

From Cannes: Daniel Kasman's review and his and Ryland Walker Knight's interview with Naranjo. 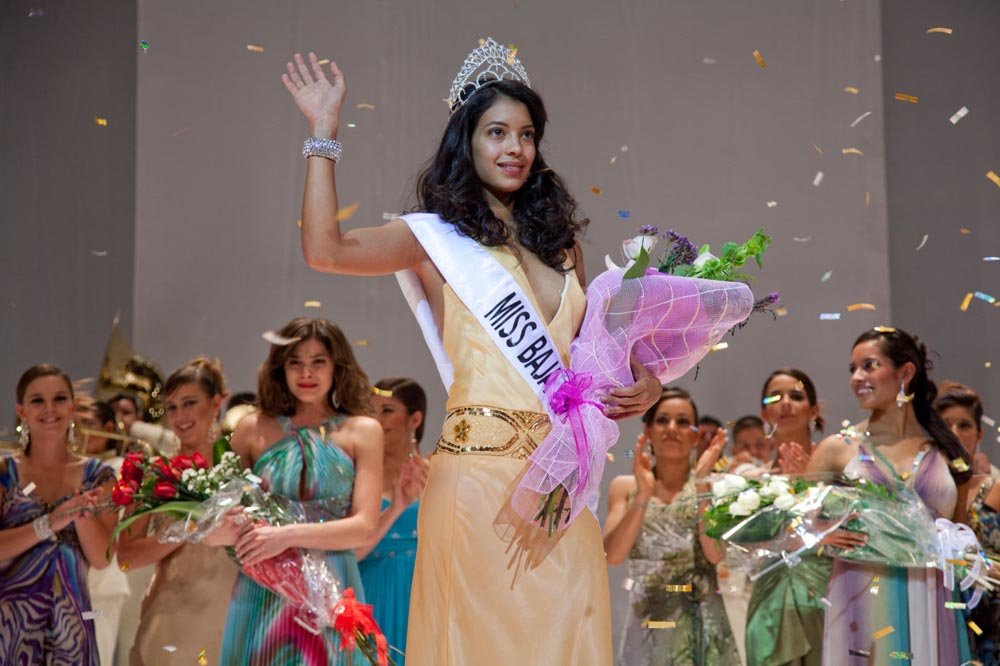 Update, 10/5: Jaime N Christley at the House Next Door: "In spite of a non-expository manner of storytelling, impervious to the temptations of close-ups and gratuitous shot/reverse-shot, Miss Bala is a superficial affair, betrayed by its pursuit of large, important themes. Even when Laura wins Miss Baja (it's the film's comic high point; her opponent's stricken, incredulous jaw-drop is priceless), Naranjo seems insistent on close-captioning the moment and, with rough-hewn man-hands, hitching it to the wagon of the larger, semi-satirical treatise on the burgeoning empire of crime."﻿

Update, 10/9: Miss Bala's "underlying joke is that no matter what Laura does, she's always representing Mexican society," writes Ben Sachs in Cine-File. "Naranjo doesn't force any of his ironies, however: The filmmaking is so virtuosic that you're always caught up in the rush of events, the implications emerging only gradually. Like his countryman Alfonso Cuarón, Naranjo works in complicated, movement-heavy long takes, particularly during the epic gun battles."﻿

Updates, 10/15: "Up until now," writes David Ehrlich in Reverse Shot. "Mexican director Gerardo Naranjo's movies have seemed more devoted to energy than content. Earlier efforts like I'm Gonna Explode were brash and callow little things, translating the primal diegetic rebellion of Jean-Luc Godard into Spanish, enchanted by method, indifferent to message, positing his characters in a guerrilla war against the echoes of a distant history. But Naranjo's new film, Miss Bala… may reveal his early work as the efforts of a revolutionary filmmaker killing time until his revolution."

Movieline's Stephanie Zacharek: "Naranjo keeps the action tense but understated; instead of allowing explosions and shootouts to pile up, he rations them in taut doses. There's nothing particularly daring about Miss Bala beyond its restraint, although in the contemporary movie climate, that's probably daring enough by itself."﻿