Bruises from your head to your toe
There are marks all over you
There's no place for you to hide
Since they painted you black and blue
The Auteurs: 'Life Classes / Life Model' (1994)

Francis Bacon's engagement with cinema is well-chronicled, and he had a particular yen for Battleship Potemkin - obsessively so, perhaps. This much can be divined from many of his paintings - one of whose recurring tropes, endlessly revisited in multiple manifestations, is the nightmarish, Munch-esque monochrome close-up of the grey-haired old nurse, her mouth in a rictus of horror, her reading-glasses shattered, blood on her face, from the Odessa Steps sequence of Eisenstein's 1925 classic. A distillation of outrage, assault, a world gone suddenly and horribly out of kilter, the precise point where the political and the personal messily intersect: the effect of armed, violent revolution upon the fragile human visage (see, among others by Bacon, the Study for the Nurse in the film Battleship Potemkin [1957]).

The image depicts the panic of a wounded nurse whose smashed pince-nez spectacles are splayed across her blood stained face. This fearful image held a fascination for Bacon who always kept a copy of it in his studio. It encapsulates his philosophy, ‘Painting is the pattern of one's own nervous system being projected on canvas’* 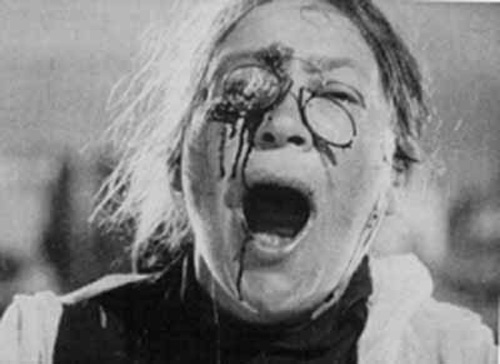 That face, that specific face, haunted Bacon - a memento mori of sorts, or maybe a memento belli, a memento dolere, first cousin of the Velazquez Portrait of Pope Innocent X which Bacon endlessly reconfigured into a succession of 'Screaming' pontiffs - and he kept it close by. We know this because a still of it was found, ripped from some discarded film-history book in the stygian disorder of his London studio after his death, and can now be seen in the 'Archive section' of the major Bacon retrospective touring the world this year, the 100th anniversary of his birth. 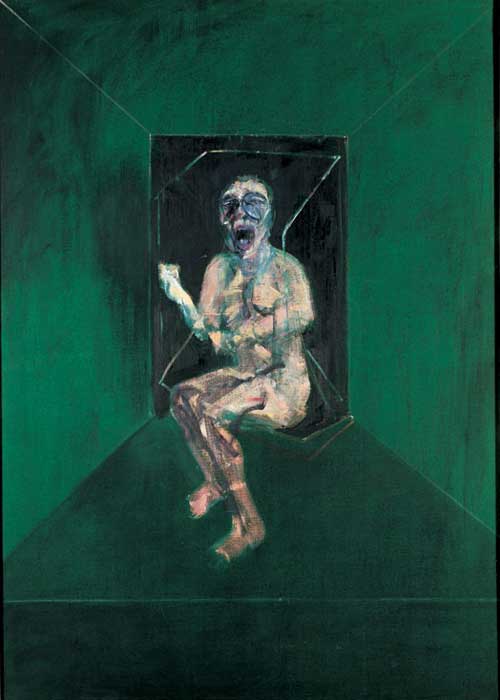 The exhibition debuted in London, at Tate Britain, on September 11th of last year, concluding there on January 4th, before moving on to the Prado in Madrid. Next up: the Metropolitan Museum of Art in New York, where it's set to run from May 20th to August 16th. The Tate Britain describes the Archive thus: The posthumous investigation of Bacon's studio confirmed the extent to which he used and manipulated photographic imagery. Often united by a theme of violence, the material ranges between images of conflict, big game, athletes, film stills and works of art.

The Archive confirms the debt Bacon owed to Eadweard Muybridge, the Victorian/Edwardian 'zoopraxographer' (subject of a 1974 documentary feature by Thom [Los Angeles Plays Itself] Andersen) whose turn-of-the-century sequential photographs of galloping horses are often cited as a crucial element in the development of very early cinema. In a glass case, one particular Muybridge book - Animals In Motion (1907) - is laid open at a particular page, the array of photographs thereupon bearing the superbly concrète-poetic caption SOME PHASES IN THE WALK OF THE LIONESS, THE LION, THE TIGER, THE DOMESTIC CAT, THE CAMEL, COMPARED WITH THE CRAWLING WALK OF A CHILD, THE SUSPENDED WALK OF THE SLOTH, AND THE WALK OF THE BABOON REPRESENTING THE APE FAMILY.

Thursday, November 20th, 2008. I arrive in Trafalgar Square to visit Tate Britain for the Bacon retrospective. It's three o'clock, and I plan to spend a couple of hours in the museum before heading over to a nearby hotel, where I have been invited to a press showing of Darren Aronofsky's The Wrestler. This will be my second viewing of the film, which I first saw at the Viennale (Vienna International Film Festival) three weeks before at a late-night screening. In Vienna, I am blown away by this immensely rewarding example of the gutter-poetic/elegaic "noble loser movie," which shows Aronofsky forsaking his smart-aleck tone and stripping back his technique to craft a film as heartbreaking as it is hilarious. Next morning, after much consideration (both waking and dreaming) I decide is one of the top half-dozen films of the decade.

At Trafalgar Square I am disconcerted to discover that the building which I had always thought to be Tate Britain (formerly the Tate Gallery) is in fact the National Gallery, and that the Tate is a 20 minute walk away, in Pimlico on the banks of the Thames. I walk fast, but after a couple of wrong turns it's a good 45 minutes before I arrive at the gallery itself. I'm therefore a little pushed for time, and also somewhat hot-and-bothered, uncomfortably aware of my own exertion, sweat, increased body-temperature: even in November, London (which, with all its concrete and high buildings, is something of a "heat island") can sometimes be disconcertingly mild.

This turns out to be ideal preparation for the Bacon exhibition, of course, as one of the artist's main subjects is the body: as organism, as entity, as pliable, malleable conglomeration of tissue and flesh. Room 4, Crucifixion, greets visitors with a quote from Bacon: Speaking after completing the third triptych in 1965, he simply stated "Well, of course, we are meat, we are potential carcasses." Meat we are, to meat returneth. Mince and gristle, ham and hock, tripe and offal, Bacon and.. mutton. "I'm an old, broken-down piece o'meat," as Mickey Rourke (as 'The Ram' [i.e. Randy Robinson] {né Robin Ramzinsky} was to put it, forty years on and then some, the wind blowing over the ridged contours of his battered visage, in off the beaches of New Jersey.

I wander the ten rooms of the exhibition (Animal - Zone - Apprehension - Crucifixion - Crisis - Archive - Portrait - Memorial - Epic - Late) on a looping, self-reflexive series of circuits. I know many of these paintings, but only from reproductions, books, postcards. For years I kept a photo of Bacon above my desk, torn (carefully) from a Sunday-newspaper magazine, his bulbous face near-planetary as it tilts upward hopefully, assertively, towards the source of light. His paintings are savage, intense, remorseless. There's greatness here - but, as is often remarked, well, would you actually want one of them on your wall?

There's one work by Bacon which I would quite happily fix permanently in my home, though it's not one of the large-scale paintings that would fetch millions at any auction. Indeed, if it did ever make it to the sale-room, I can't imagine it would go for more than a few hundred, perhaps a thousand at the most. It's in the Archive room, framed but undated and untitled, captioned Overpainted magazine page showing Jack Dempsey. The accompanying article is legible : "...although beaten for the title by Tunney in 1926, the name of Dempsey still carries magic."

And then there's Jake 'The Snake' Roberts. Born Aurelian Smith, Jr, Gainesville, Texas, 30th May, 1955. Star of the WWF documentary Beyond the Mat, and reckoned to be the real-life inspiration for the character of Randy 'The Ram' Robinson. Though aficionados also discern elements of Shane Douglas (i.e. Troy Shane Martin), Justin Credible (Peter Joseph Polaco), perhaps even Magnificent Morocco, and Terry Funk.

The Wrestler : a film in which the careers of both character and actor follow such similar arcs that the differences between them seem irrelevant, negligible. Rourke, speaking the scriptwriter's words, is talking about himself. Of course, it's fiction, but painted over the contours of fact so closely that the categories blur before our eyes (as everyone knows, pro wrestling isn't real. It's all for show. But the bruises are real. The blood is real. The chastisement of our world was upon Him / And by His wounds were we healed. )

Beyond the mat, through the celluloid : who goes there? I'm taken back to Bacon in his studio, perusing his magazines. Bacon never drew from life and always worked from photographs. He had a copy of Eadweard Muybridge’s pioneering book from the 1880’s, ‘The Human Figure in Motion’ which explored movement through series of still sequential images of people walking, running, jumping and wrestling.*

He always had an eye for an athlete. His attention is caught by Dempsey's swarthy handsomeness, the force of his masculinity (remembered stories from a 1920s childhood?) leaping across the decades and off the page. Bacon paints over Dempsey's outline in the photograph, pins the page to his wall, a rough page of A4, a shadowy homunculus therein, knowing it will surface again and again in his canvases, Dempsey's shape transmogrified into forms alien, menacing, destroyed.

Just as Bacon habitually delivered his works to galleries at the last minute and beyond, canvases still wet with his paint, Aronofsky's rushed The Wrestler to Venice for its world premiere while the festival was well underway. Organisers joked that it would be a "wet-print" premiere, and so it proved. And the celluloid is still wet, will always be so: a fresh layer of liquid, quite literally a "film", allowing us to discern, beneath the Ram, Ramzinsky (not to mention Jake the Snake and company). Beneath Ramzynski, Robinson; beneath Robinson, Rourke. And then? Who can say. Maybe we should just be happy to scrutinise the suspended walk of the sloth.

Details of the Met retrospective

pages from a cold island is a monthly dispatch from the British film scene by Neil Young.

Aronofskypages from a cold island
3
Please login to add a new comment.