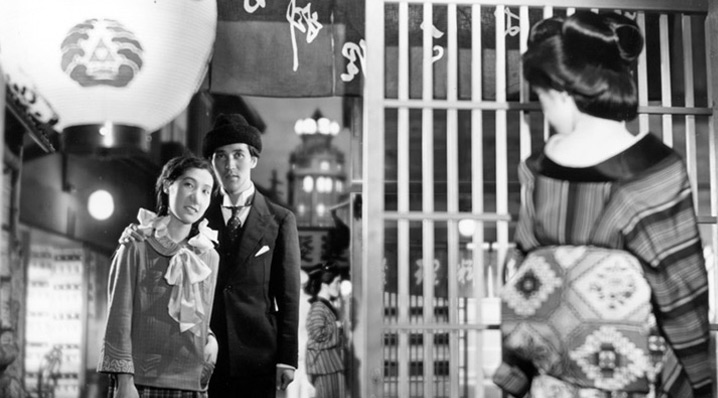 Above: Yasujiro Shimazu's 1937 film, The Lights of Asakusa.

Arriving for the last few days of this year’s Berlinale, at first I thought my being late to the party was why I didn’t find any new films that blew me away (as opposed to last year’s stellar yield of Everyone Else, By Comparison, Beeswax, and The Milk of Sorrow). But reports of the first week, such as those of fellow Auteurs correspondents, led me to believe that I hadn’t missed that much, what with World on a Wire, a restored 1973 Fassbinder TV miniseries, drumming up the most critical excitement.

Germany’s present-day cinema made a strong showing, with Angela Shanalec’s Orly and Thomas Arslan’s Im Schatten (In the Shadows) drawing raves on this site and elsewhere. I was able to catch up with the Arslan and if anything, it’s an incredibly pleasurable film to watch, humming along on its crime caper plot with a laconic efficiency that would do Melville or Siegel proud. With Misel Maticevic as a hitman who seemingly can do no wrong, the film serves up a series of familiar devices, taking pleasure in their familiarity while maintaining a beguiling ambivalence as to how much it believes in its own fiction and its hero’s exceptional abilities at criminal survival. Despite his impeccable ability to execute, his predicament somehow gets messier to the point that it subverts his indomitable aura, not unlike the gradual warping of Viggo Mortensen in A History of Violence. At least that’s how I read a movie that at times feels executed too cleanly—Arslan seems aware that, whether perfect heist or movie plot, nothing is foolproof.

At any rate, Im Schatten deserved to take the place of a crime movie in Competition, The Killer Inside Me, a typically overextended Michael Winterbottom production held together by Casey Affleck’s chilling performance as a psycho misogynist Texas sheriff.  Jasmila Zbanic’s On the Path embodies the quintessential Berlinale Competition entry: contemporary social issue (Bosnian woman fears husband is falling into fundamentalist Islam) predictably resolved (and hamstrung) by reductively righteous left-wing arthouse sensibility (in short: feminism > religion). Yoji Yamada’s Otôto (About Her Brother), about a well-to-do family shamed by an oafish uncle, bears a similar stench of correctness regarding class, though Yamada, who’s worked his whole career with middle-class affability, here seems, like Arslan, to turn it inside out: when family members cast aspersions at their uncle, they seem to damn themselves with their own intolerance. The most enjoyable Competition film I saw was Gustave de Kervern and Benoit Delépine’s freewheeling Mammuth, which plays like an Alexander Payne movie with less bile towards its characters. It scores most of its points off Gerard Depardieu’s middle-aged hulking slab as he roams the French countryside to collect paystubs from past employers to qualify for retirement benefits. Shot mostly on open road locations, the film has a unique look, rendering its handheld naturalism in grainy oversaturated colors, as if to mock the realist pretentions of the Dardennes.

But for landscapes on screen, the Forum Expanded section couldn’t be beat. Of course there was James Benning’s Tulare Road, already praised by Neil Young. The embedded video admittedly doesn't do justice to the paradoxical sense of immersion and expansiveness in Benning's tri-partite installation, but check out how one German infant brought along his own ride to Benning's road movie:

There's also Heike Baranowsky’s Racetrack, a meticulously calibrated series of stop-motion sweeps across a Death Valley spot where rocks reputedly move on their own.  But neither of these could compare with the palpable sense of artistic breakthrough one gets seeing Heinz Emigholz’ early films, even three decades into their existence. In Arrowplane, Tide, and especially the Schenec-Tady series, Emigholz attacks the long shot gaze that has come to dominate the international festival aesthetic, by cutting up frames and rearranging them in symmetrical patterns, creating sequences that bring awareness of the celluloid medium front and center, only to subsume it in a bold new spectacle. No doubt an avant-garde watershed, the films are violently rhythmic (à la Holls Frampton), distressingly sensual (à la Peter Tscherkassky), and quasi-stereoscopic (à la Ken Jacobs).

The Emigholz films were my biggest personal revelation (those who’ve known his work for years, please forgive my ignorance, and let’s agree to spread the good word), but for sheer entertainment value, I point to two films I saw by Yasujiro Shimazu, selections from a sidebar imported from last fall’s Tokyo FilmEx Festival. The films were revelatory in light of a conversation I had with Daniel Kasman just before heading to Berlin, in which we pondered the overt Western influence of 20s and early 30s Ozu and Mizoguchi films, and whether Japan's increasing hostilities with Western powers in the Pacific had compelled its filmmakers to adopt a more “nationally pure” aesthetic (i.e. Japanese historical stories and themes, non-Western mise-en-scène) from that point on.  The two Shimazu films I saw are both from 1937, the same year Japan's invasion of China flared tensions with the West, but they reveal a director unapologetically in love with European and Hollywood culture. In The Trio’s Engagements three department store employees caught up in the fickle affections of their boss, a bourgeois go-getting Katherine Hepburn type.  Characters break spontaneously into song and get into free-wheeling arguments, behavior that seems more derived from American genre idioms than from Japanese social customs; it’s as if Shimazu is playing in a giant Hollywood dollhouse.

Lights of Asakusa brings this analogy vibrantly front-and-center, centering on a Western theater troupe who perform in blond wigs and frilly costumes out of Puccini or Berlioz operas.  But the real theatrics take place around them, caught up as they are in a a complex melodrama unfolding in a seaside resort town littered with thugs and assorted local interest.  Asakusa is a real district in Tokyo, but the film is pure escapism into a world that belongs to no particular time. Again, Shimazu lets his characters wear their passions openly: characters leap fearlessly into fistfights; the film’s hero threatens to cut his finger off to prevent a couple from divorcing. Likewise, Shimazu barrels heedlessly into plot entanglements, carrying the viewer along with his characters’ expressiveness and his vivacious pacing.

Possibly the pre-50s Japanese answer to Sirk, Shimazu indulges in the throes of melodramatic fantasy, just as one of his characters passionately gives his all to his Western roles, even as the local audience mocks him for his pretensions. It’s a delight in play-acting whose earnestness doesn’t quite fit camp; though if Shimazu had played in international festivals back in the day, he almost certainly would have been derided for aping Western tropes, rather than upholding a distinctly high-minded “Japanese” aesthetic à la Mizoguchi, or even the grandstanding of Kurosawa. With the benefit of hindsight, the eccentric distinctness of Shimazu’s worldview and obsessions are clear, even upon seeing just two of his films. One can only hope that some of the new films in a seemingly mediocre Berlinale may eventually yield similar revelations.