“A small band of efficient, dedicated, highly trained warriors can defeat any number of rabble. That’s my theory of filmmaking.”

What sort of creature is 21st century cinema going to be? Two-headed beast or tentacular jellyfish? Branded or brain-dead entertainment? Elitist pastime or popular food for thought? To be on the safe side and remind future generations of the genetic foundations of this untamed living being called cinema, at the venerable age of 87 year-old, Roger Corman has opened his own YouTube channel. From king of the drive-in to elder librarian of the digital cinematheque of Babel, Corman’s protean genius is anything but nostalgic. Instead of mourning the cyclical “death of cinema” the legendary producer keeps injecting new life and ideas into the changing shape of films. While his output has significantly decreased throughout the years his relevance has not, nor, it would appear, has his maverick spirit. With the youthful gumption of a restless debutante Corman has officially entered the one place on earth where moving images are today consumed and, at times, new talents discovered.

The introductory trailer to Corman’s online Drive-In leaves no doubt as to the pivotal role that the veteran industry insider has played in post-war American cinema. Jack Nicholson, Ron Howard, Martin Scorsese, Jonathan Demme, Tommy Lee Jones, Joe Dante, Sandra Bullock, Pam Grier, Robert De Niro, William Shatner and Sylvester Stallone are only some of the names that passed through the Cormanian Factory before moving on to the more derivative dream factory. The adjective used here to describe the creative nature of tinsel town is not to be solely intended as a belittling affront. It is not inaccurate in fact to affirm that the commercial output of Hollywood from the 70s onwards owes a great deal to the work of Mr. Corman, whose importance has never been fully acknowledged. It is not only a matter of famous names but also a question of formal innovation, of pushing boundaries both thematic and moral. Steven Spielberg may have made sea creatures and aliens family-friendly, thus pacifying their symbolic charge, but both Jaws and E.T. wouldn’t have sold half of the tickets they did had they not been preceded by Corman’s lowly monsters. While Hollywood relies on star power, pre-sold concepts and narrative platitudes, Corman bet on unknown actors and directors, weird ideas and implausible stories. As Fidel Castro would say, history will absolve him.

Roaming the periphery of the empire, he re-utilized costumes, sets and abandoned scripts to articulate a spectacular and commercial critique of the mainstream via its leftovers. A thorn in the flesh of dominant taste, Corman’s B-movies were stowaways of the imagination, clandestine visitors of downtown theaters where the “improper” was given free rein on the screen. Cheaply and quickly made but rich with inventions, many of his films were also infused with inconspicuous political subtexts. A Bucket of Blood (1959) was a vitriolic glimpse into a beatnik community of artists where greed, self-serving ambitions and vainglory ruled. The circular stupidity of man throughout the ages was the subject of Teenage Caveman (1958), while the trigger-happy, filial violence of an American family in Bloody Mama (1970) was Corman’s psycho-elliptical take on the gangster movie. X: The Man with the X-Ray Eyes (1963) instead probed the optical limits of the cinematic gaze, its dark obsessions and uncontrollable drifts; in the labyrinth of voyeurism the characters are trapped as far as the eye can see. Dementia 13 (1963) and Boxcar Bertha (1972) were respectively Coppola’s and Scorsese’s debuts. 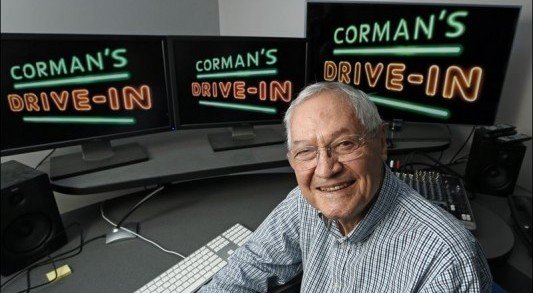 As the title of his autobiography points out, all of his movies always made their money back; except one, The Intruder (1962). Even watched today, Corman's only commercial failure makes the liberal benevolence of movies like Mississippi Burning or Amistad look very pale indeed. His only foray into overt political filmmaking is a frank and rather disturbing look at the vicious racism of a small southern town almost a decade after segregation had officially ended. It apparently didn’t do very well at the box office… That was the one lesson he admits to have learned the hard way; from then on Corman opted for sub-textual political nuances. Underneath their cheesy veneer his films maintained a critical if idiosyncratic spirit that never spared prejudices and institutional mendacity. After all, when there are monsters and weird creatures around the room for allegorical elaboration is vast and its results not at all predictable.

From The Fast and The Furious (1955) to The Expendables (1988), Piranha (1978) to Grand Theft Auto (1977), Corman’s children have become famous and went to Hollywood. His value and merits though are not be exclusively measured in terms of their lasting influence on the higher spheres of entertainment or in the number of imitations his films have sparked. Corman’s finest pupils have in fact remained relatively obscure; Paul Bartel and Jack Hill for instance may have not enjoyed the same fame their former colleagues gained, but their films remain robust pieces of ingenious American filmmaking. Not even the minimalistic existential abstraction of Monte Hellman’s Cockfighter (1974) was too audacious of a bet for the visionary producer (IMDb lists him as the uncredited executive producer of Hellman’s The Shooting and Ride in the Whirlwind too). Morally opposed to big budget productions, once when asked what would that money be better invested into Corman simply suggested the amelioration of disadvantaged neighborhoods. Unpretentious and candidly subversive, his work is often unjustly relegated to the lowers strata of film history perhaps attesting to the fact that true nonconformists can never be fully enshrined. At any rate, Corman’s selected oeuvre is now available at your hyper-local digital Drive-In where its unfettered creativity and visceral craft will surely stand proud next to tomorrow’s innovators.