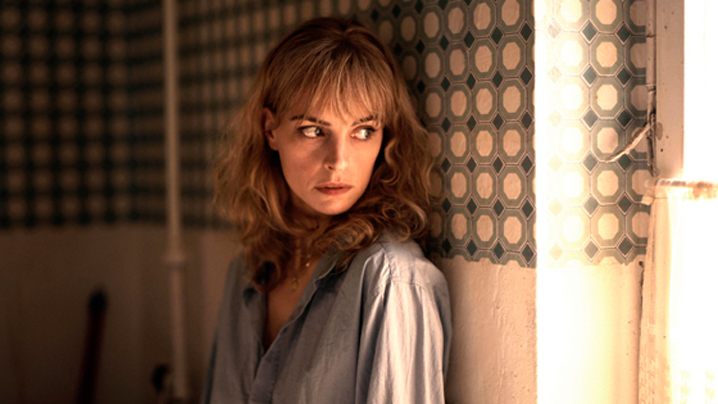 There’s an immediately apparent irony to Cinematheque Ontario’s current retrospective of films from the so-called ‘Berlin School’, a group of loosely aligned German filmmakers which has ostensibly arisen in response to the awards-and box-office baiting likes of Downfall (2004), The Lives of Others (2006), et al. As Andrea Picard observes in her program notes, the banner under which these assorted filmmakers labour is both geographically inaccurate and terminologically vague, denoting as it does neither an actual school, a common point of origin, or a particular philosophy or methodology, outside of Picard’s intimations of a “radical rebirth of the politics of the image, a cool, minimalist and sophisticated filmmaking, political in its form rather than overtly through its content.” It will hopefully not be taken as churlish to suggest, however, that the politics of these films has perhaps less to do with the intrinsic qualities of their aesthetics than in how those aesthetics are championed, spurned, or otherwise appropriated during the processes of film festival selection, promotion, prize-giving, and media coverage—all inherently political processes, certainly, but on a rather rarefied level.

This is not to say that the films themselves do not pointedly illustrate social or political issues—as in the matter-of-fact episodes within a low-security prison for mothers and children in Maria Speth’s Madonnas (2007), or the impasting of immigrant angst over the trite genre mechanics of Christian Petzold’s highly overrated Jerichow (2007)—or that their differing yet comparable styles do not indeed indicate a meticulous consideration of the image, if not quite a radical rebirth. Yet what is most evident about these films in both their content and their aesthetics is not any revolutionary zeal, but a tactful reticence that adds a formalist sheen and a sense of mystery to what are, for the most part, conventional narrative forms. For all that the Berlin School films evince various lessons learned from the touchstones of modern Asian cinema (wide framings, distended, single-shot dialogues, seemingly random wanderings and contemplations) and those of Europe past and present (Picard invokes Eustache, Garrel and Pialat, with the Dardennes lurking nearby), this is a decisively protagonist-driven, implicitly psychological cinema—a cinema of traditional concerns and intentions given a fresh, incisive spin by an increasingly common set of cinematic methods.

This should not be taken as derogation. Rather, what the best of the Berlin Scholars attest to is the power of these international currents of cinematic exchange—the migration of narrative and stylistic tactics enabled considerably, I would venture, by the festival circuits in which many of these filmmakers travel—when joined to a responsiveness to one’s national climate (even though many of the films’ protagonists spend time in-between both nations and cultures). Even the least of these films evinces a strong sense of place that grounds their cosmopolitan aesthetics in a crystalline atmosphere, in which their protagonists are suspended with a sometimes frightening opacity or an equally frightening clarity. The Berlin Scholars are elliptical in both senses of the term: in their economy of means, and the cryptic (when not sometimes maddeningly obscure) constructs they build out of seemingly familiar material.

Petzold, the School’s de facto standard-bearer after the success of The State I’m In (2000), an effective drama of married ex-RAF terrorists on the lam with their teenage daughter, and the aforementioned James M. Cain riff Jerichow, offers perhaps the textbook example of this approach: cleanly etched compositions which endeavour to be striking without drawing undue attention to themselves; an unerringly precise sound design, striking a careful balance between ambient noise, pointedly deployed music (The State I’m In makes particularly evocative use of Tim Hardin’s 1966 “How Can We Hang On To A Dream”), and staccato, sharply declaimed dialogue; and small-scale narratives that strive to combine a cultivated ambiguity and open-endedness with subtle but decisive epiphanies. Aiming to present his elusive material with a bracing straightforwardness, Petzold certainly achieves some effects, but his plainness of presentation shades too often into the merely neat—and in Jerichow, is supposed to validate some painfully clunky contrivances (a particularly garish prop that sets the would-be shocking denouement in motion) and frankly hollow, as opposed to opaque, characterizations. To a lesser degree of annoyance, one can see comparable ills afflicting Christoph Hochhäusler’s Milchwald (2003) and Thomas Arslan’s A Fine Day (2001), both straining to craft calculatedly oblique contraptions whose very lack of closure is as crashingly obvious and final as the neatest tying up of loose ends.

Viewing several of these films within a concentrated period of time allows one to see just how much of the respective filmmakers’ efforts are concerned not with “creating” but problem-solving; how to calibrate their efficient little ambiguity machines such that they do not descend into the prosaic narrative patterns which form their foundation or drift off into vagaries. Maren Ade’s The Forest for the Trees (2006), one of the essential highlights of the retrospective, extricates itself from its own narrative spiral with a beguiling grace that cleaves directly between those two poles. The story of a young teacher, Melanie (the unforgettable Eva Löbau) whose social awkwardness plummets towards a nervous breakdown (or possible madness) as she is progressively abused and rejected by her students, colleagues, and would-be friends, The Forest for the Trees has only a select number of possible fates for its pitiable protagonist. As Ade meticulously, and mercifully, measures out the episodes of Melanie’s humiliations such that the sting is felt without prolonging her (and our) immediate agony, the film becomes something of a high-wire act: how to avoid the inevitable, finite destinations for an increasingly unsalvageable human being? Ade’s solution, at once shocking, delightful and sad, is an inspired one, a bold stylistic coup that both broaches the film’s careful construction and completes it. One hesitates to call it (or anything) perfect, and yet there the word lies on the page.

It’s these kind of imaginative leaps that much of the Berlin School is lacking. Too often these feel like films by industrious students rather than venturing artists, building a respectable body of work instead of truly pushing the boundaries of cinematic grammar. That’s a tall order to place upon any group of filmmakers, of course, but much of the work on view here attests more to diligent activity than creative revival. Yet those, like Ade, who stand out from this group do so not so much through their radical uniqueness as through their astute and thoughtful use of a set of common materials. It is the very likeness of this group, their lingua franca of concerns and tactics, which has allowed the most distinctive talents to set themselves apart.

One need only compare Arslan’s Vacation (2007), a considerable improvement over his aforementioned first film in the program, and Angela Schanelec’s Afternoon (2006) to see this principle in action. Both depicting jury-rigged families slowly disintegrating during blissful summers at lakeside houses, the two films share an almost identical palette of textures and moods: the limpid sounds of wind and water, the rigourously observed codes of behaviour that articulate, rather than hide, the resentments that lie festering, an enveloping calmness which allows the ever-present darkness and pain to emerge with terrifying clarity and force. Arslan makes excellent use of these tools throughout, yet ultimately the conjugal rift at the film’s centre is rather clearcut; despite the evocative textures in which it plays out and the de rigeur abrupt/open conclusion, the film’s emotional and narrative engine finds its terminus solely within the film and not in our troubled minds afterwards.

Conversely, Schanelec with Afternoon has pushed even further the mysterious, fractured aesthetic of her earlier Marseille (2004), a film perched precariously between fascinating and bewildering (though certainly favouring the former). Where that earlier film—about an itinerant Berlin-based photographer (Maren Eggert) touring the titular ville in an effort to leave her hometown baggage behind—willfully ruptures its deceptively simple narrative late in the game, demanding that we scour its surfaces for meaning absent the previously accessible (if tight-lipped) psyches of the characters, Afternoon effects a blending of the two. Trained on the stage prior to her studies at the dffb—the German Film and Television Academy in Berlin, which also yielded Petzold and Arslan—Schanelec not only incorporates theatre into her films (both Marseille and Afternoon feature stage rehearsals at key points) but combines its lessons with the distinctive cinematic grammar she is progressively developing.

In contrast to the brusque, functional scripting of many of the other Berlin Scholars, Schanelec crafts layered, winding dialogue that, when combined with the intensely close framings of her actors, exerts an almost mesmerizing pull. As she studies a familial clan of artists almost nonchalantly coming apart at the seams, Schanelec’s exacting, rigorous, exciting filmmaking reaches beyond individual psychopathology or canned domestic drama to touch on the enormous, dark, inexorable forces which those fictions have been invented to contain. Though there is almost zero stylistic similarity, it’s nevertheless appropriate to contend that Schanelec is touching upon Bergman territory here, using the unique sensitivities of her artist-protagonists to probe the outer limits of human potential and frailty.

That Schanalec can do this with materials so akin to her fellows’ attests not only to the fact that, at present, she is one of the most accomplished artists in the group, but also, perhaps, that the materials themselves possess innate qualities apart from their practitioners. Rather than searching out wellsprings of ‘genius’, it might be instructive to view the most distinctive artists—whether within this one ‘School’ or anywhere else—as nodal points of eminently shareable stylistic strategies and narrative concerns; as beneficiaries of a common inheritance who have learned how best to focus and direct that which has been passed on to them. Not a radical rebirth, then, but a birthright, a truly national cinema (or counter-cinema) drawing on a wealth of lessons emanating from both within and without the borders of that or any one country. When Sandra Hüller, star of Hans-Christian Schmid’s galvanizing Requiem (2006), meets her long-absent father in the person of Dardenne icon Olivier Gourmet at the opening of Speth’s excellent Madonnas, it’s almost an enacted symbol of a rich, immanent potential in contemporary cinema: transcending national boundaries without losing sight of the particularities of each, an EU(topia) of the screen to counter the less than encouraging reality of same.

States of Longing: Films from the Berlin School runs at the Cinematheque Ontario from February 20 through March 14.