"The old men I film," Tacita Dean tells Simon Schama in the Financial Times, "with witchily dark merriment," he notes, "as we sit on the terrace of her Berlin studio, 'seem to die just afterwards.' And indeed they do depart: the poet Michael Hamburger; the artists Mario Merz and Cy Twombly; the choreographer Merce Cunningham. But they will never be granted more subtly revelatory obituaries. Now Dean is facing an extinction against which she is fighting with everything she has: the death of film – real film, that is; 16mm celluloid, the indispensable medium of her work, the material that gives her art its uncanny presence. The laws of the marketplace have decreed that digital rules supreme; that film is no more than a quaint relic, and the champions of its immeasurable distinctiveness are deluded romantics. Dean grieves and rages against this smug indifference…. It strikes her as an appalling irony that Edwin Parker, her lovely film about Cy Twombly, just made it under the wire for processing before Deluxe — owned by the Twombly collector Ronald O Perelman — stopped printing 16mm negatives at its Soho Film Lab in London last February."

That was when Dean wrote in the Guardian: "That was it: medium eviction without notice. This news will devastate my working life and that of many others, and means that I will have to take the production of my work for Tate Modern's Turbine Hall commission out of Britain."

Film is Dean's "offering for the most prestigious art commission in the land, Tate Modern's Unilever series," reports the Guardian's Charlotte Higgins. "The 12th artist to be invited to occupy the cavernous space, she follows in the footsteps of figures including Juan Muñoz, Bruce Nauman, Olafur Eliasson and Doris Salcedo. According to the Tate Modern director, Chris Dercon, 26 million people have now seen these works since the series began in 2000 with Louise Bourgeois."

The Guardian's Adrian Searle: "'We're analogue people, not digital,' Prince is quoted as saying in the fascinating catalogue, which includes contributions by dozens of filmmakers, artists and musicians — from Jean-Luc Godard to Neil Young, Steven Spielberg to Martin Scorsese — who explain why analogue matters. You can feel as much as see the difference between film and digital recording, just as you can hear the difference between music recorded on a vinyl record and a CD of the same performance. The screen is a 13-meter slab, standing towards the rear end of the Turbine Hall, like a great stained-glass window, but one that is in constant motion, standing in the puddle of its own projected light and dwarfing those who stand beneath it. Working with 35mm film, and a cinemascope lens turned 90 degrees, Dean's usual landscape format becomes a towering vertical…. A silent movie, Film is a rejoinder to the digital noise of the modern world. It recalls early cinema and experiments with color, cinema as art abstraction and as home movie, structuralist film and underground cinema. It is cool and passionate, lovely and weirdly old-fashioned."

Writing for TATE ETC., Philip Tinari refers back to Dean's Guardian piece and notes that "she wrote of the difference between film and digital as 'not only emulsion versus pixels, or light versus electronics, but something deeper — something to do with poetry.' This poetry is exactly what she explored in one of her landmark films, Kodak (2006), a 45-minute examination of the production process of celluloid itself at a French factory fated for early closure because of a lack of demand. A film about the making of film, it hinged on the sort of super-aestheticized conceit that has become her staple…. In recent years, Dean has devoted herself to making short biographical films about other artists, again laced with the layers of references that link them inevitably to their time. The most recent in the series… is titled Edwin Parker and depicts an ordinary day in the life of Edwin Parker (Cy) Twombly, the eminent 83-year-old painter (who died this July), at work in his Lexington, Virginia, studio." 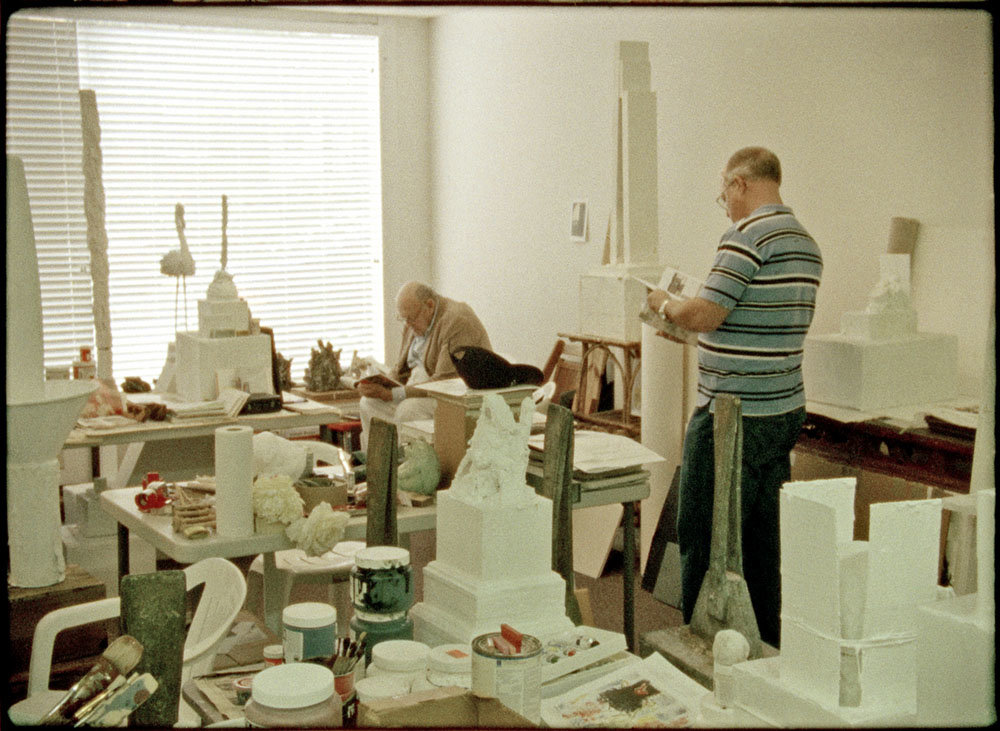 You'll remember that, for Michael Sicinski, Edwin Parker was "far and away the standout in this year's Wavelengths program" and, as he writes in dispatch to the House Next Door, Phil Coldiron agrees: "Dean approaches the problem of filming the notoriously reticent Twombly by finding the most cramped, hidden spaces to stick her camera; the feeling isn't voyeuristic, but more like Dean's camera has itself become a part of the environment… The compositions that Dean gets from these ferreted camera placements are, like Twombly's art, a conflation of the ordinary and the astonishing. From the opening, a zoomed in shot of bushes through blinds, that collapses space to explode it when a car suddenly enters the frame, to its final image of Twombly's sculptures in twilight, Dean's film, with its decentered, eschatological beauty, is the rare example of a documentary that does justice to its subject on the level of form."

For Bart Testa, though, writing for Cinema Scope, Dean "never finds a tactic for this eventless movie and the result is just too slight to hold interest for its 29 minutes."

Blake Williams for Ioncinema: "The title is Twombly's birth name, and foreshadows the 30-minute film's demystification of his reclusive persona. Showing the master working in his studio — sometimes as an indirect, out-of-focus background, or ordering food and eating at a diner — offers an insight that does little to enhance the man's body of work, but does wonders for our ability to see humanity in the most minimal and fragile of forms."

Update: The Guardian runs a collection of extracts from the catalogue with comments from Godard, Scorsese, Spielberg, Dick Pope and more.﻿