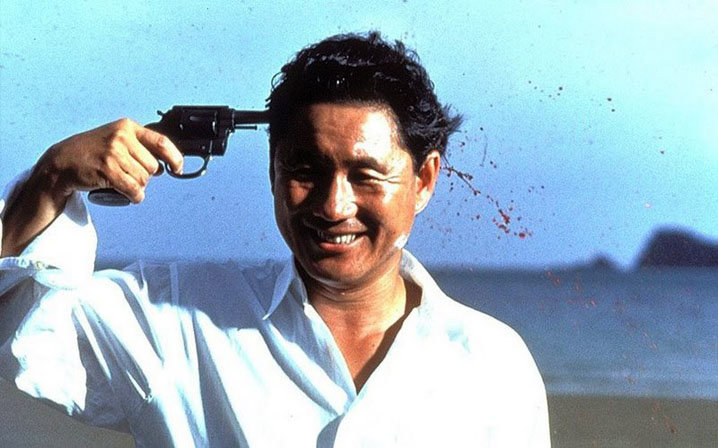 He's been all the rage in France for over a month now, honored with an exhibition and retrospective, named a Commander of Arts and Letters, and in just a couple of weeks now, his latest film will see its world premiere as part of the Competition at Cannes. Takeshi Kitano's Outrage is a return to the violent underworld of gang warfare he's explored in films such as Sonatine (1993) — which viewers in Germany can watch for free as part of our ongoing online festival showcasing the best of Cannes, co-presented by Stella Artois.

"Kitano has made a film so deceptively careless that its deeper qualities can be easily overlooked," wrote Dan Harper in 2000, reviewing Sonatine for Senses of Cinema. Kitano's "face has been called 'granitic' in its avoidance of facile expression. But the face expresses the same deadpan ferocity as the film.... I was living in Okinawa when Sonatine was filmed, and those resplendent, pellucid days, which Kitano captures so vividly, are almost too lovely to recall."

You're not in Germany? Then you have access to another set of selections from past editions of the Cannes Film Festival viewable for free through June — right here.

Meantime, still on in France: Takeshi Kitano, Iconoclast, an online retrospective is being shown in honor of and in conjunction with the Centre Pompidou's Takeshi Kitano: L'iconoclast in Paris. Also through June.