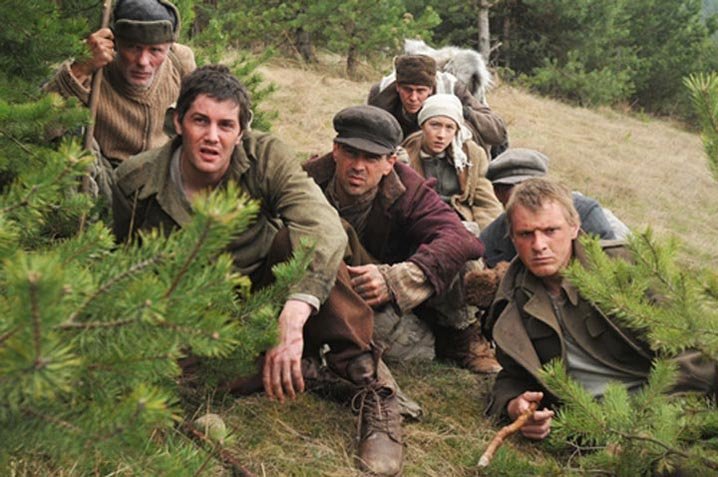 It's not that The Way Back was the big score for Telluride this year or that its debut there has generated awards season buzz or any of that, but rather, Peter Weir's presence up in those Colorado mountains evidently became reassuringly emblematic of the festival itself. AO Scott opens his Telluride roundup for the New York Times by quoting him: "If what we hear from down on the plains is true, and film culture is dying, then perhaps this place can become a kind of Machu Picchu of cinema."

Blogging for TCM, suzidoll spent a day devoted to filmmakers, catching The Magnificent Tati, A Letter to Elia, Cameraman: The Life and Work of Jack Cardiff and the festival's tribute to Weir, which began "by showing one of his older works, The Plumber. In a special program that featured an hour of clips, Weir talked about his career, his films, and his influences.... Weir's films feature protagonists who are outsiders in environments that are foreign, mysterious, threatening, or exotic — sometimes all at the same time.... Weir speculated that he is drawn to the outsider protagonist because of his background as an Australian — a country originally founded as a penal colony. Consequently, few native Australians want to look backward at their family histories. This left Weir with questions about his heritage that no one could answer and with the feeling he wasn't really at home in Australia, or anywhere. He feels he has always been the perennial stranger in a strange land."

So let's take a look at what's being written about The Way Back before turning to general wrap-ups of this year's Telluride (which, of course, ran for four days over the Labor Day Weekend) and an index of the coverage of the coverage so far — there are at least a few more entries on individual films to come.

Like many, the Hollywood Reporter's Stephen Farber notes that Weir "has not made a movie since 2003's Master and Commander: The Far Side of the World, which surely reflects the growing challenges for directors who choose to follow an uncompromising artistic path in today's constricted cinematic universe.... As a technical achievement, the film — which ranges from the gulags of Siberia to the Gobi Desert — is astonishing, but it also showcases powerful themes that make it unexpectedly moving and resonant."

Variety's Peter Debruge finds it to be "an impressive but not especially immersive true story of four POWs who escaped the Siberian Gulags and crossed the Himalayas on foot to freedom.... Weir, who veers from the specifics presented in Slavomir Rawicz's book The Long Walk: The True Story of a Trek to Freedom due to controversies surrounding its authenticity, gave himself room to fictionalize the epic journey. But the director clearly finds the voyage more important than the voyagers, doing little to dramatically enhance the story's central group of escapees (which includes Jim Sturgess as an alleged Polish spy, Colin Farrell as a Russian mobster, Ed Harris as an enigmatic American and four other nondescript prisoners)."

"I pigeonholed Weir as the Poet of Mystery, which he said he didn't mind," writes Tim Appelo at Thompson on Hollywood. "But with Master and Commander and much more with The Way Back, he's taken a plunge into the poetry of realism.... But reality messes with Weir's gift in some ways. The characters, despite galvanic acting, are types rooted in real people, not always real-seeming. After a riveting, propulsive camp scene and snowstorm escape, after about an hour the trek feels like The Long Slog, frequently enlivened with bursts of drama but burdened with the inevitability of their successful destination."

"For those with the fortitude to take the plunge, it offers an intense, morally thorny exploration of the limits of human endurance," writes Eugene Novikov at Cinematical. That's the least controversial bit of his review, though. In Contention's Kristopher Tapley isn't the only one to object to it, arguing with Novikov's very first line (the one quoted wasn't it), his take on awards prospects, tone and, well, just about everything else.

Another tribute at Telluride was paid to Claudia Cardinale, and Todd McCarthy found her in "gregarious high spirits" as she "enjoyably provided a few tidbits about her personal and professional life."

"For me, a TFF highlight is always the Guest Director program," writes suzidoll's fellow Movie Morlock keelsetter, "and this year the key collaborator is Michael Ondaatje, author of The English Patient." Paragraphs on a handful of Ondaatje's selections follow.

Martin Scorsese and Kent Jones's A Letter to Elia.

Again, a few more entries are in the pipeline.