"Based on the acclaimed novel by The Remains of the Day scribe Kazuo Ishiguro, Never Let Me Go is that rare find, a fragile little four-leaf clover of a movie that's emotionally devastating, yet all too easily trampled by cynics," writes Peter Debruge in Variety. "Every carefully chosen gesture, composition and note in this tragic love story seems engineered to wring tears as director Mark Romanek (One Hour Photo) gradually pulls back to reveal the full scope of his ambitious thought experiment.... Though technically a science-fiction story, Never Let Me Go plays more like a polite Victorian romance, all repressed feelings and unrequited yearning."

"Romanek's adaptation kept me at arm's length from frame one," writes Kristopher Tapley at In Contention. "Romanek seems to have David Fincher's tendency toward coolly registered emotional tones. And it does him no favors here. Of the cast, I was most responsive to Carey Mulligan's nearly catatonic state of inward consideration and turmoil, but Keira Knightley gets plenty of time to shine, while Andrew Garfield develops a unique character that nevertheless remained elusive when a sense of connection was sorely needed."

Kazuo loves and fully supports the film. Go to www.askishiguro.com and ask him yourself. RT @lucydarby what did Kazuo think of the film? Sat Sep 04 12:38:42 via Twitterrific

Blogs the Hollywood Reporter's Jay A Fernandez: "The cinematography, by Adam Kimmel (Capote), is exquisite as it frames timeless (and nameless) countrysides filled with stately boarding schools, old farmhouses and fields and a wide, empty beach holding a small, solitary form that manages to evoke beauty and existential loneliness in equal measures. Rachel Portman's (Emma) score is gorgeous and melancholy, but overused in a way that makes you wonder if it's being used as a hedge to bolster onscreen drama that the director didn't have full faith in. [Alex] Garland's script is tight while full of open spaces, and uses voiceover sparingly and effectively."

"Sadly, Romanek, who has created some of the most iconic images of the past 20 years with his music video work has reigned himself in with the material," finds Gregory Ellwood at Hitfix. "He mentioned before the film began that he didn't come on as an 'auteur,' but as 'part of a team' and that conservative direction is evident throughout. A little more daring — at least visually — could have elevated the material beyond its tame visual aesthetic."

"This film feels like the product of Kubrick and Malick's bastard son," suggests David Poland at Movie City News. "In fact, it seems to me that had Kubrick lived a bit longer and met Romanek, he might have handed AI to him instead of Spielberg."

"It's not flawless, but it is a wonderful film," finds FirstShowing's Alex Billington.

"I cried buckets at this film," admits Anne Thompson.

Updates, 9/5: "Never Let Me Go wasn't supposed to be the movie Mark Romanek directed this year," writes John Horn, leading into his interview for the Los Angeles Times. "The distinguished commercial and music video auteur (he directed Apple's iconic iPod silhouette ads with U2, and Johnny Cash's poignant 'Hurt' video) had seen his last three film projects fall apart one after the other, typically just weeks before cameras were set to roll."

"I don't understand why Kathy, Tommy, Ruth, or any of the other people who attended the school don't decide to make a run for it," ponders Peter Sciretta in a 9-out-of-10-star review at /Film. "They aren't afraid to challenge their situation but yet they fully accept their determined fate without much of a fight. I'm sure the novel probably presents an expanded explanation. Secondly, the third act turning point seemed rather obvious to me, but not the characters."

Updates, 9/7: "The first problem with the movie is that it never completely lays out the logic of this parallel universe," argues Stephen Farber in the Hollywood Reporter. "Screenwriter Alex Garland probably wanted us to share the limited knowledge of the characters, but this idea could have been maintained while providing just a touch more crucial clarity for the audience.... What does save the film intermittently is the poignancy of the love story, which is bolstered by the skill of the performances."

And THR's Jay A Fernandez talks with Garfield about Never Let Me Go, David Fincher's The Social Network and, of course, prepping for Spider-Man.

Update, 9/8: In the Huffington Post, Ishiguro explains why the film's taught him quite a lot about his own novel.

Update, 9/10: "The great success of Romanek and Garland's Never Let Me Go is its quiet subversiveness," writes Tom Preston for the Guardian. "Nothing that happens here is screamed out; rather the truth unfolds gently and ebbs against lives that understand it but yearn for existence to be something else." 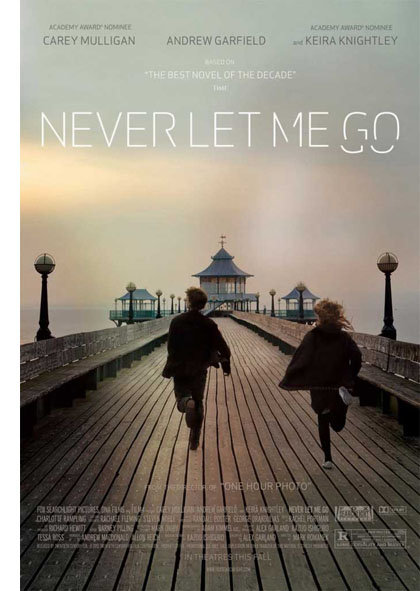 Updates, 9/11: "Romanek has repurposed the bucolic British countryside into the stuff of realist science fiction, producing an England that looks stuck in a custody battle between the sun-kissed nostalgia of Atonement and the chilly chaos of Children of Men," writes David Ehrlich at Cinematical. "The movie exists in a perpetual sunset (a less stringent Days of Heaven), and the golden hues of Romanek's shaky and intimate compositions — when combined with subtle period details — make it feel as though scenes are slipping into memory even as they flicker away on screen. But because that sensation alone does such a great job of vividly capturing how painfully elusive time can be, the incredible economy of Garland's script amounts to overkill, effectively pushing the film to a pace that reduces its characters to wisps and fragments."

"I ultimately had some trouble connecting to it, largely because Romanek maintains a measured, reserved tone that struck me as too rigid," writes Noel Murray at the AV Club. "But I predict that many, many people are going to be deeply moved by Never Let Me Go. It's got such a powerful story, and it uses its fantastical premise to explore how people reflect on their lives, and grapple with the common confusion of their upbringing, seeking explanations for the lies and rumors that defined who they turned out to be."

"It's a truism to say that speculative fiction is always about our world rather than an imaginary world, but it's certainly true in this case," writes Salon's Andrew O'Hehir. Still, "this movie isn't a lecture about the horrors of human history. It's more like an allegorical reminder that we all live and die amid confusion and injustice, and that life seems too short no matter how long it lasts, and that the days we have are miraculous and then they are gone."

Twitch's Todd Brown finds Never Let Me Go to be "a near perfect meeting of a brilliant cast, a potent director wise enough to know when to exercise restraint and a remarkable script from Alex Garland."

And Charles McGrath talks with Garland and Romanek for the New York Times.

Updates, 9/12: "Outside of Mulligan and some of the secondary performers, the actors just feel stranded and unformed," writes Patrick Z McGavin. "Garfield and Knightley are somewhat miscast. The strongest two parts are Hawkins and the superb French actress Nathalie Richard, a Jacques Rivette regular, who playing a mysterious French art patron, is about the only one who injects her role with the necessary mystery and subtlety. Everything else is grimace, pain and heartbreak. For a rumination on life and existence and what it means to be human, Never Let Me Go is antiseptic and too tightly wound to ever change gears or achieve some kind of lyrical flow. The magic dissipates."

Slant's Ed Gonzalez argues that "it helps knowing what Never Let Me Go is about from the beginning because it allows us to more accurately gauge why Kathy's existentially fraught struggle with identity doesn't completely fly on the page and largely flounders on the screen." At any rate, "Romanek's signature pop aesthetic, utilized to great success in the music video format, translates banally to the big screen. If this is artistry, it's entirely of the Oscar-baiting variety."

Updates, 9/13: "One of (maybe the most important) uses of science-fiction — of which this novel and its filmed adaptation are examples (they also fit into the categories of 'alternate universe' scenarios and dystopian fiction, though is any society not dystopian?) — is to explain how our own world works (and might work better or worse) by showing us imagined, futuristic worlds." James van Maanen: "Never Let Me Go achieves all this and more without ever raising its voice or sporting a special effect."

Updates, 9/16: "One of the pleasures of Never Let Me Go, on the page and on screen, comes from the detective work the story requires, whether you're noting Mr Ishiguro's use of verbs like 'huddle' and 'wander,' or the way that Mr Romanek groups actors in the image." Manohla Dargis in the New York Times: "All this tells you something, as does Ms Knightley and Mr Garfield's droopy, loose-limbed physicality, which has none of the coiled energy of youth and serves the story, even if neither actor can manage its delicate passages. Ms Mulligan, her dimples largely in retreat, fares better without lifting the film to where Mr Romanek would like it to go."

"Given its cast and setting, Never Let Me Go exemplifies the genteel cinema of 'quality,'" writes J Hoberman in the Voice. "Whether the movie knowingly deploys that mode, as the novel intentionally used Kathy's relentlessly prosaic narrative voice to normalize her situation, is something else... While rugged individualists might feel a measure of contempt for the resignation with which [the children] accept their fate, others — depending on their political sympathies — are apt to analogize the children to exploited factory workers, military conscripts, humanoid replicants, slaves, or, most alarmingly, those fellow creatures we call livestock and whose capacity for feeling we necessarily deny.... Never Let Me Go is not a movie about death but, more painfully, about the consciousness of death."

For Eric Hynes, writing for Movieline, "like last year's The Road, another loving adaptation of a contemporary classic, Never Let Me Go teases out the novel's central drama but neglects the mysteries at its margins — the gathering clouds that actually produce the storm."

"Ishiguro's book was an unconvincing blend of repressed romance and speculative fiction, with superficial too-polite prose and a clunky approach to narrative secrecy that wouldn't fool the gang on Scooby-Doo," argues Keith Uhlich in Time Out New York. "Director Mark Romanek and screenwriter Alex Garland transfer the story fairly faithfully to the screen. Yet they cut away some of the casual details... that would have at least livened things up."

"The movie is uneven, largely because it's trying something unusual and ambitious," finds Noel Murray at the AV Club. "But that unusual ambition also makes it deeply moving. The fantasy elements are woven into a powerful story, all about how people reflect on their lives, and about what makes those lives meaningful. Like all of us, Garfield, Knightley, and Mulligan grapple with the common confusion of their upbringing, seeking explanations for the lies and rumors that defined who they became."

Coverage of the coverage: Telluride and Toronto 2010. For news and tips throughout the day every day, follow The Daily Notebook on Twitter and/or the RSS feed.