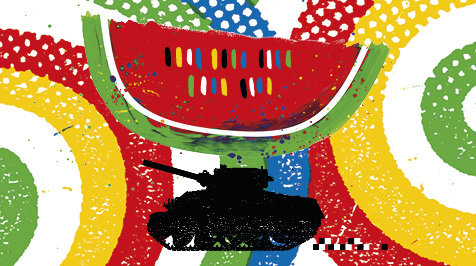 Short films are the loose change in the treasury of world cinema usually dismissed in favor of feature films, an over-valued currency not infrequently resulting into toxic assets. The cheap label slapped on shorts unjustly omits their pivotal role in a film industry that needs them but ignores them. It is common knowledge that in 90% of cases the calling card for new directors comes in the short format, yet it would not come as natural to name the title of a short film made by an established filmmaker.

Confined to the extra features of DVD reissues, programme fillers at major film festivals, sidebar curiosities for bored cinephiles, shorts lack in visibility because they are not as profitable as their longer brothers. Even imagination has its monetary value, and stock exchange…

Shorts nonetheless possess intrinsic values: they have a snapshot quality and are able to focus intensely on a single subject. They also seem to be effective ways to try out ideas to be later developed at feature length (see Carax’s Holy Motors, for instance). The merit and brilliance of this 20th edition of Curtas Vila Do Conde relates to the aforementioned inasmuch as it addressed, through a clever programme, the thankless position of shorts on planet cinema.

The festival is in fact structured in such a way so that visitors are contextually reminded of the crucial role short films play in the industry. A minor masterpiece of festival programming, Curtas’ different sections characterize the philological significance of shorts in the long history of film. Aptly enough, the opening film is not a short. Idiosyncratic oversight? Not really. Nicolas Provost’s The Invader is in fact the first feature film of a director who has cut his teeth on the short films circuit and is part of the Da Curta á Longa section (From Shorts to Features). The latter is devoted to feature length films made by directors the festival has attended to when ‘shorter’ and includes films by Apichatpong Weerasethakul, Laurent Achard, Helvécio Marins Jr. and Adrian Sitaru.

Further illustrating the festival’s commitment to long lasting short filmmaking is the Curtas 20 Anos section (Curtas 20 Years) showing four films commissioned by the festival from four filmmakers closely related to it. The Miracle of Saint Anthony by Sergei Loznitsa, whose In the Fog was in this year Cannes’ official competition, is an attentive and non-judgemental look at a religious festival in Northern Portugal. For the 20th anniversary of Curtas, ﻿Thom Andersen (Los Angeles Plays Itself, Red Hollywood) realized with Reconversao﻿ an elegiac quest into the essence of Eduardo Souto Moura’s architecture. The Song of Rocha by Helvécio Marins Jr. is a moving and exhilarating portrait of Alfredinho (Rocha) and his multi-faceted existence: Fado singer, Karate fighter, former drug dealer, nightingale, bar tender, family and community man.

It is often at film festivals that one is assailed by the Hamletic dilemma of why so many stale and useless films are being made (but also selected and programmed) instead of not. Curtas’ International Competition, on the contrary, boasted a remarkably valid selection honoring the noble practice of selection to the detriment of bloating overabundance. Almost every film had an aesthetic purpose, was convincingly realized and felt true, at least to its maker’s intentions. In no particular order here are the films that better exemplified the potential of short filmmaking and its unique ability to unexpectedly provoke in the spectator a grin of sly complicity:

A Fábrica encapsulates the unfiltered immediacy of an abbreviated epic and Postcards from Somova, Romania proves that observational cinema can be engaging, while Applied Theories of Expanding Minds makes the trite remark that reality is stranger than (science) fiction ring (in)authentically true. In Sack Barrow Ben Rivers exploits the chromatic latency of 16mm to film the vivid colors of sulfuric encrustations at a small factory in the outskirts of London. Prtljag exposes the open wounds of ethnic warfare NATO warplanes always leave in the wake of their democratic bombings; Pythagasaurus ponders on the comic irrationality of the dinosaurs of maths. I Morti di Alos rides the stimulating divide between docu-fiction and mockumentary to tell a timely story on the (death) toll progress and economic growth impose on their beneficiaries. A Story for the Modlins imagines the true story of Elmer Modlin, a struggling Hollywood actor who after having appeared in Polanski’s Rosemary’s Baby locked himself up in a Madrid apartment for 30 years. Phillip Barker in Malody films a small roadside diner built inside a huge wooden wheel that is rolled over as the spectator wonders in awe at the changing angles of gravity and the ensuing spectacle of falling objects and ingredients. Listening to a dreamy conversation between passengers in a floating aircraft, Moving Stories sketches an intense visual poem "on the air."

A section dedicated to the bastard and glamorous child of the short film, the music video, a collection of short films articulating Kubrick’s lasting influence on the world of moving images, as well as an Experimental Competition, were some of the ancillary sections of the festival. A retrospective on the lesser-known works (shorts included, of course) by renowned post-New-Waver Olivier Assayas, the National Competition and initiatives for kids completed the event. A confident and efficient model, Curtas unassumingly demonstrates its cultural function and sustainable approach. Watched against the baggy narratives of TV serials and their crafty rehashing, many of the shorts in Vila Do Conde forced us to accept that a sharp idea is always enough.

Celluloid Liberation Front is a multi-use(r) name, an "open reputation" informally adopted and shared by a desiring multitude of insurgent spect-actors, aesthetic dynamyters and random deviants. For reasons that remain unknown, the name was borrowed from a collective of anti-imperialist blind filmmakers from the Cayman Islands. @CLF_Project﻿﻿﻿ ■