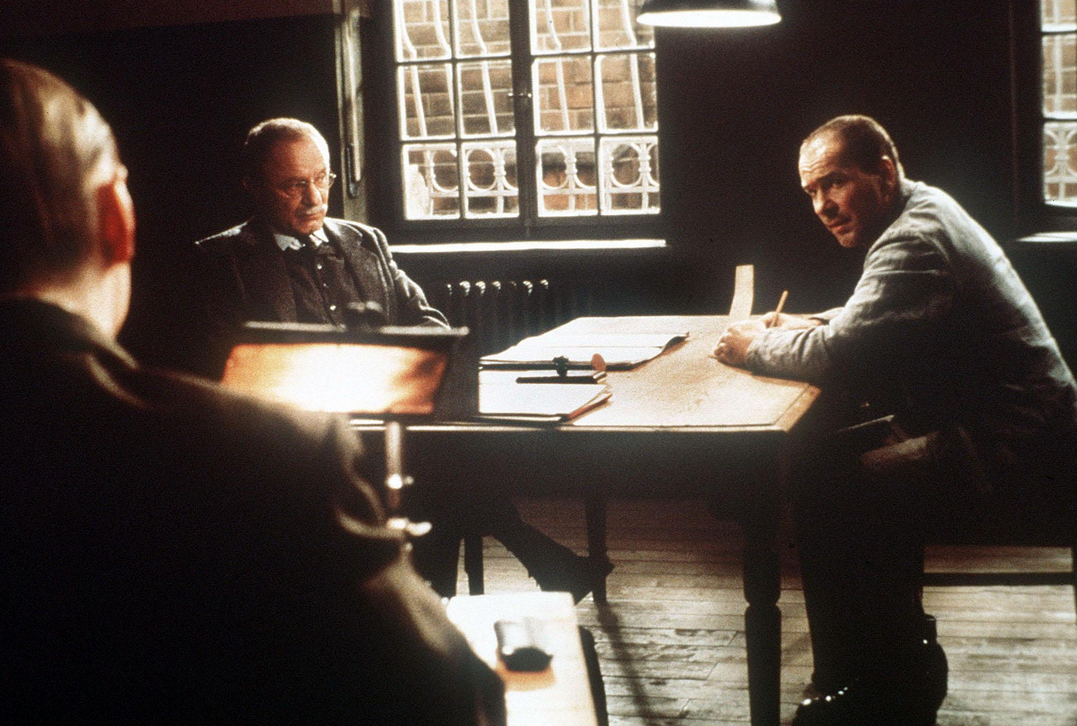 ﻿Leaning back and shrouded in the nocturnal darkness of an interrogation room with only a glint of overhead light hitting his upper chest, a convicted serial killer glares at his psychiatric interrogator and insists “you already know that!” This is the introductory image of taboo-obsessed German filmmaker Romuald Karmakar’s The Deathmaker (1995), and the jarring lack of context to the statement is by design; it’s as if Karmakar is saying, “This is a film about knowledge.” Confined entirely to the space of a single nondescript room in Weimar-era Germany yet surprisingly and exhilaratingly expansive, the rest of the film constitutes a diverse set of interrogations into what it means to know, what can be known, different types of knowledge, and the depths of human behavior that knowledge actually complicates and obfuscates rather than illuminates.

Until a brief appearance of two prison guards and a final-act injection of a young victim and a visiting doctor, The Deathmaker distills its ensemble to three members, one of whom never utters a word: Prof. Dr. Ernst Schultze (Jürgen Hentsch), death-row inmate Fritz Haarmann (Götz George), and a passive, unnamed scribe (Pierre Franckh). The film is a series of lengthy dialogues—some taking the form of conversations, others resembling confessionals and ruthless depositions—between Schultze and Haarmann, the infamous child murderer that was first loosely dramatized in Fritz Lang’s M. Abstracting the outside world through language and two strategically opened and closed caged windows that lead only to brick walls, Karmakar centers his dramatic and visual interest on these three men, letting their mounting and cresting interplay dictate the pace and momentum of the film. As a result of this unrelenting attention, the film inevitably forms an unguarded intimacy with its characters, growing closer and closer physically and emotionally while Schultze’s empirical task—to psychologically clarify the situation and, hopefully, be able to understand future murderers—is increasingly frustrated.

Due to the sordid subject matter of the dialogue (Haarmann thoroughly describes both gay pedophiliac sex and the painstaking process of murder and corpse disposal, all transcribed from the real-life interrogation) and the deeply involved performances (particularly by George, who won the Venice Film Festival's top acting prize for his role), The Deathmaker guarantees a certain exotic interest. But it’s Karmakar’s precise direction that fully locates the expressive potential of his self-imposed limits and allows the film to develop a sense of propulsion where there is only stasis. Prior to working on The Deathmaker, Karmakar had only made documentaries, albeit ones that consciously straddled the line between the "real" and the "fictionalized." Karmakar has acknowledged a stormy on-set relationship between himself and George—allegedly prompted by George's assumption of artistic superiority based on the fact that his director had never worked in fiction—as a defining feature of the film’s production. Accordingly, the majority of the few English-language reviews on the film have focused on this angle, often mirroring the main actor's sentiments in their direction of critical attention towards the fearlessness and force with which George inhabits a difficult role while losing sight of Karmakar's contributions (in a larger sense, neglect has been the default mode for the German director throughout his career). 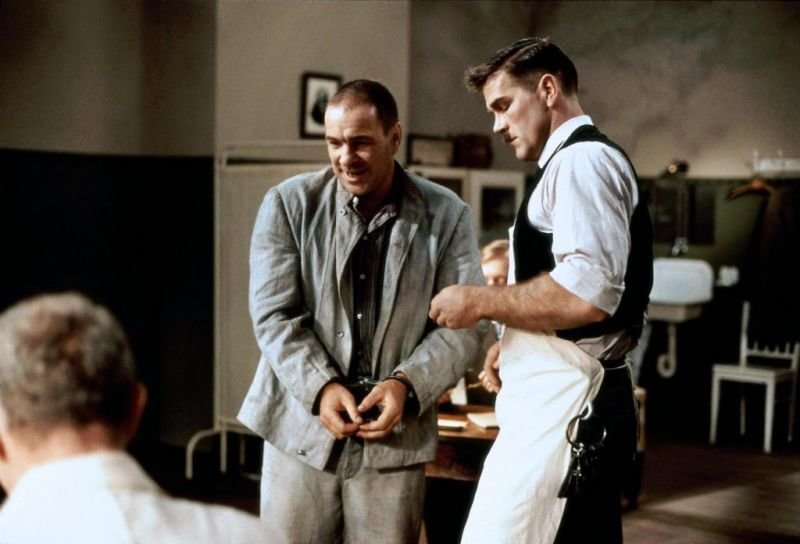 Shot on 35mm and illuminated with no more than four light sources (two windows, an overhead tungsten light, and the scribe's desk lamp) at a time, the film has weight to it; a shot/reverse-shot formula transcends its function as exposition—it becomes a study of the wrinkled skin, beads of sweat, and nuances of expression in these men’s faces as they challenge each other. What this elongated attention to faces (wide shots are used sparingly) inevitably accomplishes is a heightened awareness to the thinking, breathing humans underneath. Further, this approach gives a human face to evil. With almost giddy delight, Haarmann discusses his horrific crimes, but he also fondly recalls his romantic flings, his relationship with his sister, the textures, sensations, and routines of his previous life. He stumbles over words, forgets things, apologizes for misunderstanding something, shows visible and logical signs of emotion, seeks approval from Schultze, and, most importantly, garners a respect and admiration for him; put simply, he is a man, not a monster. And as a man, he is naturally inscrutable. He defies the desire to know.

As a psychiatrist, on the other hand, Schultze's job is to rationalize and compartmentalize behavior, to assign to it motivation and intent. It's easy to see how this presents a problem in regards to Haarmann, whose every word and gesture flies in the face of psychological coherence; he recalls the act of murder as if it's fun and games one moment and a fair-weather friend the next. This irresolvable conflict is reflected in Karmakar's filmmaking. The interrogation room is presented as a space of invisible boundary markers—separating the questioning zone from the scribe's observation zone, as well as Haarmann from Schultze—that only the camera can traverse freely. Early on, an entire conversation is captured in a slow tracking shot that repetitively circles around the table, gracefully shifting focus between Schultze and Haarmann while also studying their expressions at every possible angle. Neither showy nor distracting, the shot subtly underlines both the push-pull dynamic between the two men and the cyclical nature of the interrogation, always circling around a point but never gaining closure. Other times, Karmakar's camera moves almost imperceptibly around its subjects; by the end of its move, the composition has crucially transformed. For a scene the night before Haarmann's execution, a technique from Godard's Contempt is briefly borrowed before the camera settles into a balanced two-shot configuration as Schultze and Haarmann’s discussion draws to a close in mutual incomprehension. The ultimate effect is of a camera that refuses to simplistically take sides, weighing each character equally and letting the conversation organically dictate the visual perspective. 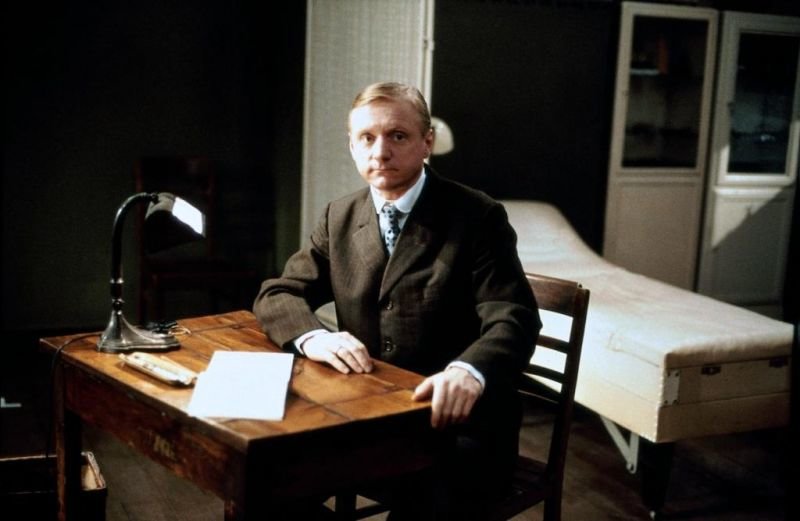 Physically removed though he is, the scribe plays a key role in this visual and dramatic rhythm as well. Despite his lack of intervention, Karmakar routinely reminds the audience of his presence with observant cutaways or wide shots that arrange the three figures into a triangle, each occupying a relatively equal portion of the frame. This visual democratization aligns the scribe's methods—painstakingly documenting the conversation word for word, dispassionately observing—with those of Schultze in terms of intellectual authority. Moreover, because what the scribe is doing mirrors the spectator's own involvement with the film, the audience is implicated in this knowledge acquisition (or lack thereof) too. Knowledge, then, seemingly unreachable through Haarmann’s shifty façade, crumbles, and all that’s left is emotional reaction: gradually disrupting his stoic façade, the scribe begins expressing apprehension when he senses Haarmann coming on to him across the room, and later releases (and then promptly extinguishes) a hiccup of laughter in response to one of Haarmann's more jokey offhand comments. Schultze, meanwhile, tries his best to dampen his reaction, but a particularly gruesome description by Haarmann can't help but spur visible disgust.

The Deathmaker, then, posits a fascinating question: is an understanding of such horrible behavior even possible, and if not, is the very fact that humans are emotional, sympathetic beings what ultimately negates the possibility? Or, conversely, is emotional understanding, unquantifiable as it is, one form of knowledge? Significantly, the film's final scene features Schultze promising Haarmann he'll attend his execution; has he somehow grown sympathetic in his extensive exposure to this man? One senses in the concluding act of the film Schultze abandoning the aggressive questioning and psychological tactics of the first half in favor of simple discussions about details from his life, almost as if he's easing him through his final days. The film is by no means apologizing for Haarmann’s heinous acts, but it does sidestep the path of knee-jerk revolt and condemnation in favor of a more human sense of multivalence. It doesn’t merely imply that the darkness in our world cannot be entangled from the goodness; it exists in a space where such binaries are useless.