Titles appear over a bad painting of a haunted pagoda. No explanation for this is ever given. A childish signature scrawls across the frame, and without warning we cut to a confused, ugly man perched before a drawing board.

A disembodied voice addresses this individual, whose dazed eyes dart around the room in barely-suppressed panic. Is he being addressed by the Deity, or by some short-circuiting neurosis in his brain, suddenly seceded from his consciousness and declaring independence?

Frankly, we wouldn't be surprised by anything that might be going horribly wrong inside that strange head, which resembles a defaced egg.

There is an abrupt, jarring cut, and at once the man appears calm. What has happened during the missing footage? Evidently he has decided that he is addressing the Deity, and that the Deity thinks he is O-Kay.

The man's teeth seem weird. Perhaps he is wearing them inside out. Perhaps he receiving the disembodied voice on his fillings?

"About eight years ago, on a certain day..." Still, the legalistic vagueness of his phraseology suggests a man on trial for his life. One day, perhaps, we will all be called to account by Vitaphone.

Now the man attempts, unwisely, to cross the short distance from his drawing table to a desk. He adjusts his trousers awkwardly, as if they are wet, or as if he fears (or hopes!) that they are undone. He pretends to answer the telephone, but the woman's voice on the line obviously originates within his own mind.

Now he hesitantly displays a bottle containing dollhouse furniture. A sudden wide shot makes us wonder if the man himself, and his art deco office, are not themselves bottled.

Enter a young woman in a cloche hat. "Do you expect me to jump through a hole like this in a cigarette paper?" It's obviously a code phrase, perhaps with a sexual meaning, but the man takes the question literally and the woman leaves, unimpressed by his acumen.

Here, the unnamed director, or whomever or whatever is responsible for all this, serves up a couple of insert shots. The man's hands appear to have been photographed in a dark, empty cavern. The woman is shown going through the hole in the paper in a manner designed to recall the application of a condom to an erect penis, with the woman cast in the role of penis. Little wonder she leaves as soon as she can. 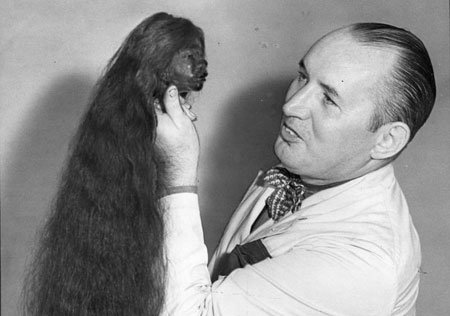 Now the man starts talking again. He displays some ink drawings of varying quality. He can draw Einstein but not a windmill. "Abraham was not a Jew," we learn, but we do not learn on what the man has based his portrait of the centuries-dead prophet.

The man laughs randomly, and sways as if drunk. We can only guess at the Babel of voices now ricocheting about within the fragile eggshell of his attenuated cranium. Now he pretends to do a drawing, not at his drawing board but upon a screen. But the exercise, designed to show us a woman who can speak rapidly, is pointless, and the man seems to realize this. He announces that the woman is here. Why, then, show us a drawing. As he prepares to present the woman to us, horror and pity flare up: it seems certain that he will begin to gesture at an empty patch of air where he imagines the phantasy figure to be present.

But in fact, she is real, another woman in another cloche hat, although she's at first far from talkative, as she stands in silence as the man fumblingly introduces her. He seems unsure not just of his words but of their meaning, of everything. Then the woman begins to fire off words like bullets from a Gatling gun, and we get a sense of what the inside of the man's mind must sound like.

The man bows, as if suffering a urinary tract infection, giggles silently, and his hands flap and fumble, before another surprise cut interrupts what seems sure to be a grotesque fit. After the cut, the man is more composed, but makes an inexplicable statement: "Now I'm going to show you the strangest man that I've ever seen in all my travels."

"But we're already looking at you," we want to shout.

More elliptical cuts allow the man to instantly create a drawing of an African man with horns growing from his head. Then we see a photograph of the African. He looks unfortunate, but not as much as the man, whose smile gives the impression that his teeth are trying to wiggle out of his mouth and squirm over his face in an insane frenzy.

Now he mimes the act of drawing a hairy fish, apparently the deadliest animal alive, and we wonder if we will then see a photograph of it, or if one will swim onto the set and begin talking rapidly, or if perhaps he has one in a bottle, living amid bobbing items of miniature furniture. But instead we are treated to a short but memorably unpleasant animated sequence, in which a laughing shark meets the same fate as John Hurt in Alien.

Then, in a final fit of madness, the film has one of the man's drawings come to life. Fortunately it is a drawing of a little Chinese boy, rather than a deadly fish or, God forbid, a disjointed windmill. Seemingly operating the child as a ventriloquist operates a dummy, the man extracts a faltering song from the terrified lad, the stilted delivery clear evidence that it is the charismatically-challenged adult who is truly producing the stiff, tuneless sounds. The boy tries to sing "Boop-oop-a-doop," but his vocal mechanism becomes jammed and the sounds repeat like an echo.

Then the man murders the child, using a supernatural method of his own devising. He inserts him back into the drawing and robbing him of his too-brief ability to move and speak: once, a living breathing Chinese-American boy, he becomes merely a pattern of carbon smears. His last words, spoken in the same robotic stutter, will stay with us all for a long time to come.