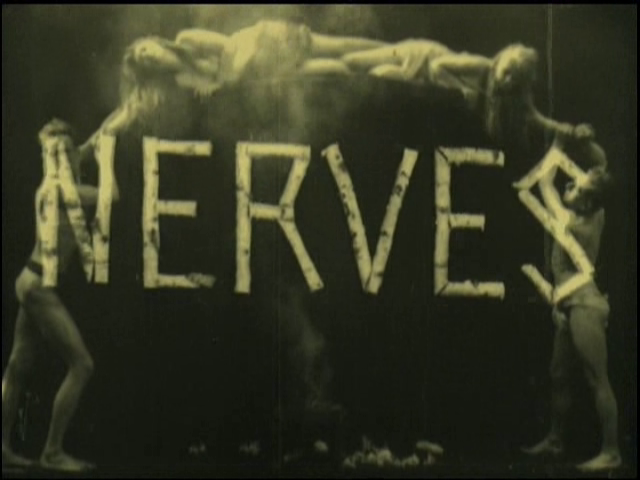 The cinematic world of Robert Reinert is an overheated madhouse. His Nerven (Nerves, 1919) anticipates Caligari by a year, but feels as if the expressionist classic's angular, hand-painted house of cards has been exploded and scattered on the winds into the real, three-dimensional world. It also feels as if it's set in the "very nervous little community" that opens Jerry Lewis's The Ladies Man.

But maybe Reinert was the man for his time: there are reports of audience members being hospitalized, and one woman wandered into the street in her nightgown, screaming, "Now I am going to die! Now I am going to die!"﻿ Whether this was caused by seeing the film is unprovable, but she apparently thought it was, which is in itself suggestive of the film's power. One is reminded of the horror movie slogan proposed in the Dudley Moore comedy Crazy People: "This film will fuck you up for life!" 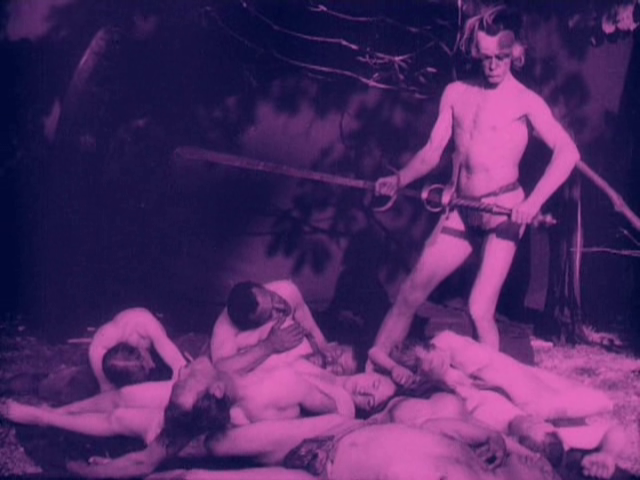 Sadly, this demented, fervid and intense soap opera exists only in truncated form, despite great efforts at restoration. So we have a version a bit like the last restoration but one of Metropolis: long complete stretches interspersed with fresh title cards briefly summarizing the missing bits.

Plot synopsis should be the clearest way to give a sense of the film's unique, earnest and crazed attack, but even just after watching it I'm a little uncertain of what I saw. The prologue does give a strong clue as to Reinert's project, though. 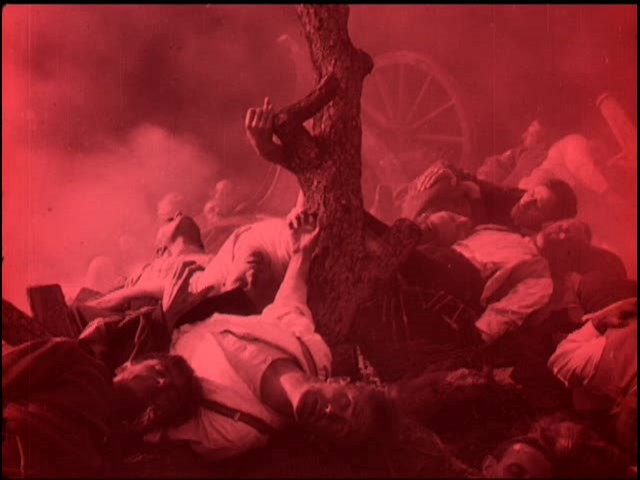 Titles warn us of the strange and oft-destructive effect of nerves. Visual examples are given: a woman psychically apprehends her son's death on a battlefield miles away; a murderer kindly feeds a starving bird seconds after his foul deed. There's an Edward D. Wood Jr. seriousness to all this, coupled with an obliviousness to how peculiar and badly-argued the points are, how irrelevant the examples. One gets the impression of Reinert as a man of strong passions, a burning desire to convey a message, and perhaps a slightly dim brain. 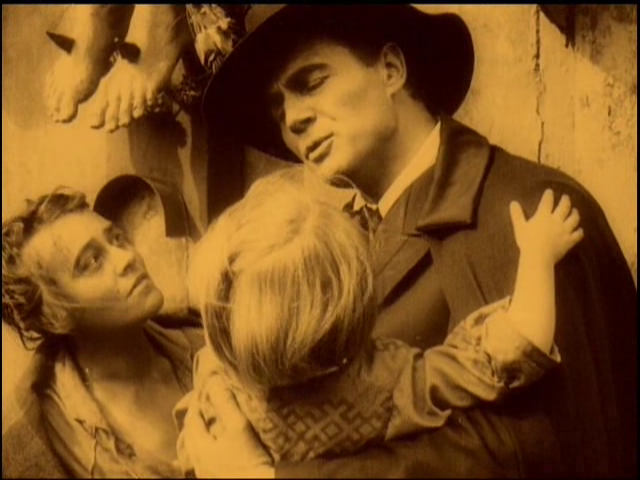 If one persists in this view and don't find the story, eventful as it is, compelling, one can always play spot-the-Jesus. There's a painting, statue or icon hiding in the background or creeping into the edge of so many frames. It's like Where's Waldo? with an ecclesiastical spin.

Story: we start at a big castle, where the esteemed owner, Roloff, has invented something that he says will allow him to rule the world. But it blows up, and he gives up on that idea (we will never hear of it again). Now we get his sister's upcoming wedding, only she's in love with Teacher John, but he's in love with Roloff's wife. The sister accuses Teacher John of rape in order to get out of marrying, and Roloff, her brother, is so struck by her dramatic account of this that he comes to believe he witnessed it, and testifies to the effect in court. John feels guilty of adultery in his heart because of his desire for Mrs. Roloff, and doesn't defend himself, leaving his blind sister crying into her guide dog.

There's more, much more of this—I didn't even mention the gardener's son, who gets executed for randomly killing a man after he's spurned by Roloff's sister, another plot thread that leads nowhere unless it's all simply fuel for the nervous illness which will seize Roloff and plunge him into a series of beautiful, double-exposed nightmare illusions. 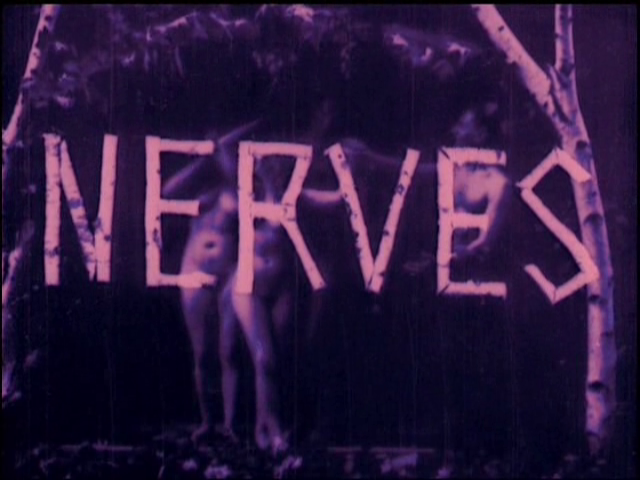 Heaping dementia upon dementia, there are also Reinert's "living intertitles," or there were: many are lost. But the few that remain are fantastic tableaux vivants, testifying that even if Reinert couldn't construct a coherent narrative or a coherent argument, he could certainly conceive and execute a beautiful image.

Supposition #1: Reinert, a Viennese, is under the influence of Freud, or at least the heavy cloud of Freud-ideas hovering over Europe at that time.

Supposition #2: Reinert has either not read Freud, or read him and not understood one word in three. But it's no loss: the director's personal conception of nervous illness is at least as compelling as that of the father of psychoanalysis, and less wearyingly sex-obsessed. In Reinert's world, anything can cause neurosis, and it almost certainly will. 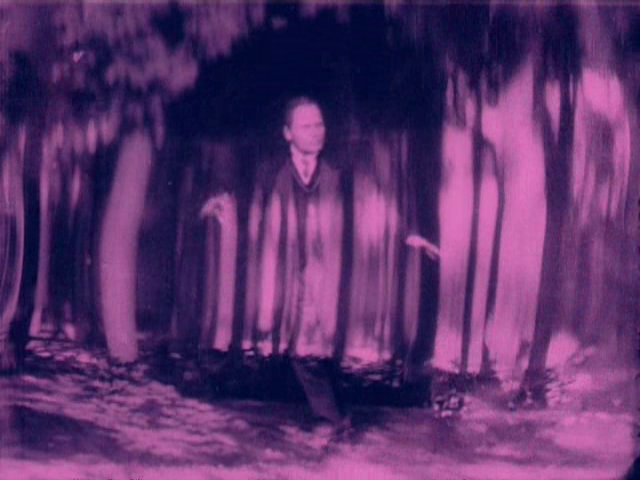 There's more, much more: riots in the streets, suicide, euthanasia, arson, and escape to a nunnery. And yet Teacher John finds true love at the end in an arbitrary happy ending that could give Boogie Nights a run for its money (Everything's Fine And We Don't Care Why!). Reinert asserts, without any evidence, that his lovers are cured (they're ploughing fields, after all) and that their offspring will be mentally healthy.

"New life! New nerves!" crows an intertitle. And we think, "Wait, what?" and scroll back to the beginning, looking for clues.

With thanks to David Bordwell.