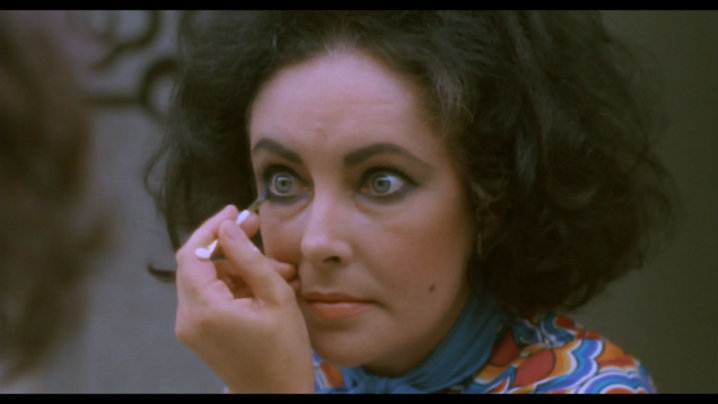 Giuseppe Patroni Griffi deserves attention. His chic revenger's tragedy 'Tis Pity She's a Whore (1971) is one possible way in: you get Charlotte Rampling, an Ennio Morricone score that's just a Jacobean riff on his spaghetti western stylings, lashings of sex and gore, and a design sensibility which pays some kind of lip service to period while being deliriously seventies at all times, so that it would not be too surprising if Oliver Tobias donned a set of sixteenth century tinted shades, or a tie-dyed doublet.

An alternative entry point is Identikit (1974), AKA The Driver's Seat, from the novel of that name by Muriel Spark. It's the tale of a mysterious woman wandering through a nameless city, hoping to rendezvous with "a friend" whom she's apparently never met. In a parallel plot thread, apparently taking place a day or two later, the police are interrogating everyone she's come into contact with. But what has she done to attract their interest? The woman in question is played by Elizabeth Taylor, so the possibilities seem limitless. With cinematography by Vittorio Storaro in the midst of his giallo phase, the results are as lush, decadent, campy, strange and alluring as you can imagine. 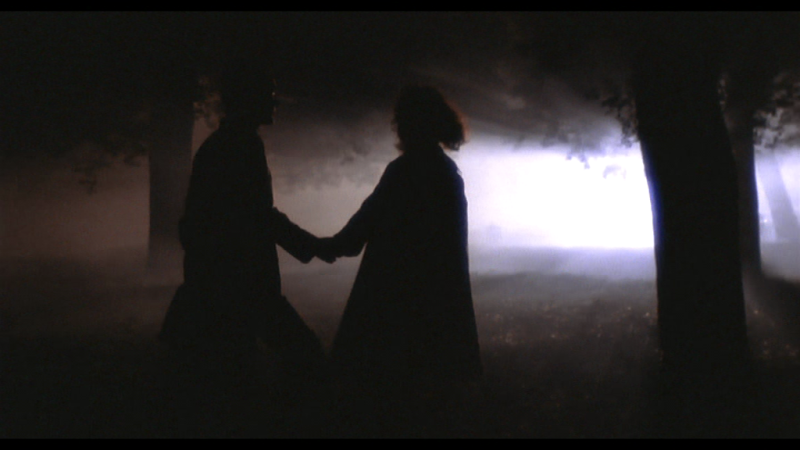 Part of the strangeness is Taylor (who was making seriously weird films at this time: think of Secret Ceremony). Gone is the breathtaking beauty she undoubtedly had, and held on to, and even managed to evoke when it had faded. Here, the force of will required to suggest the fabulousness of yore is staggering, but Taylor is nothing if not game. It's not that she's even old, but her figure has filled out and the rather heavy approach to eye makeup seen in Cleopatra has only grown more exaggerated: lurid clothes ("Completely natural colors!" she declares, erroneously) and clown hair add to the shock. As with her ballsy performance in Who's Afraid of Virginia Woolf, some of this is characterization, some of it is just character.

So, we have an odd plot (Spark was a long way from The Prime of Miss Jean Brodie with this one) and a faded star, but what makes the whole experience so...special, is, well, everything. Ian Bannen provides ebullient support, and Andy Warhol turns up briefly as an English lord, which is a casting coup of demented genius. You can just feel your precariously suspended disbelief plunging earthwards. It's actually harder to conceive of a piece of casting more gloriously wrong. Pablo Picasso as an American rock star? Truman Capote as a Swedish wrestler? Nothing quite gets there. 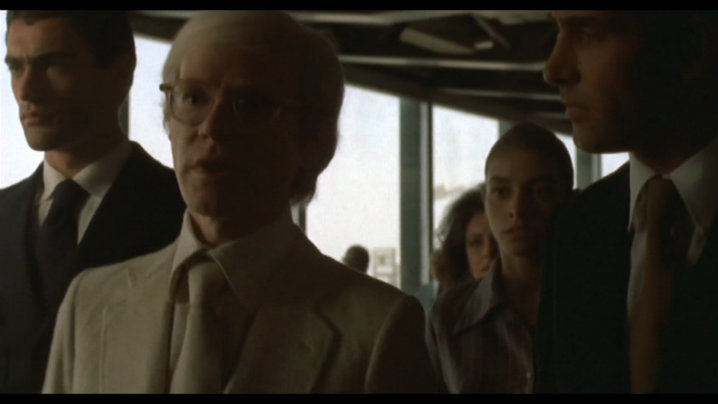 (In fact, though, Andy's habitual abstracted hauteur gives him a naturally aristocratic air: tailoring and dubbing take care of the rest.)

But the Warhol walk-on is a mere side-show to this ravishingly photographed, psychologically mysterious, indefinably icky film. The modern urban settings seem to have grown out of the airport that links them, and the people are all airport people: they all come from elsewhere, and have the wrong accents: a woman from South Africa is German, Mona Washburne plays a Canadian, Liz seems also to be playing a German (Lise from Hamburg) and Ian Bannen has no defined point of origin at all. He's one of the odder characters, a smutty fellow traveler of Liz who's obsessed with his macrobiotic diet (at one point brown rice cascades from his trouser leg as if he was made of the stuff), who believes he needs an orgasm a day for health reasons, like Dean Martin in Kiss Me, Stupid.

Every scene in the film is off-center, uncomfortable and distractingly unconvincing, but nearly every scene turns out to have a rational reason for being the way it is. A mysteriously deserted mall is eventually revealed to be unpopular due to a bomb scare the day before, and indeed the nameless city is plagued by terrorist outrages, like the world of Buñuel﻿'s That Obscure Object of Desire or Gilliam's Brazil.

So the effect is something like a giallo without visible crimes, a mystery with no focal event, and a spiraling absurdity that keeps coming back to rationality in the most unexpected ways. Ultimately, the sense of uncertain comedy about the whole exercise stops dead, in a climax which is horrific, bizarre, and surprisingly affecting. To say more would be unfair.

I've known I had to write about this for years (and thanks to David Ehrenstein for the annual prompting), but didn't know quite what to say. What can you say? I throw the floor open to any interested parties, and fall back exhausted upon a heap of lovely images: 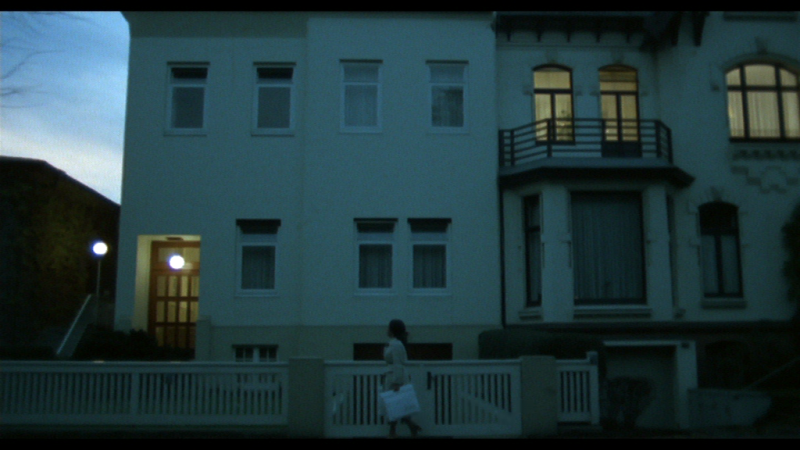 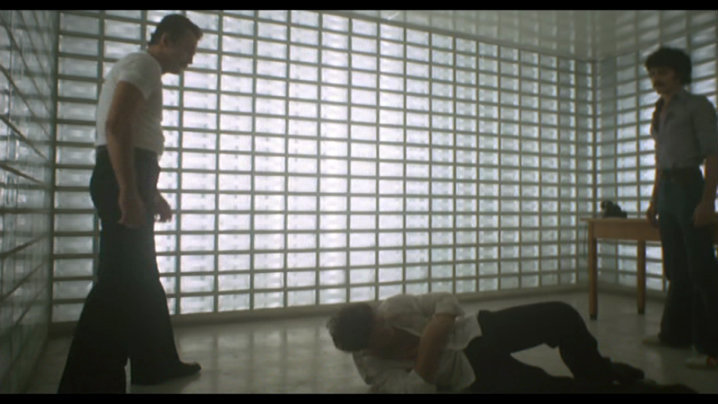 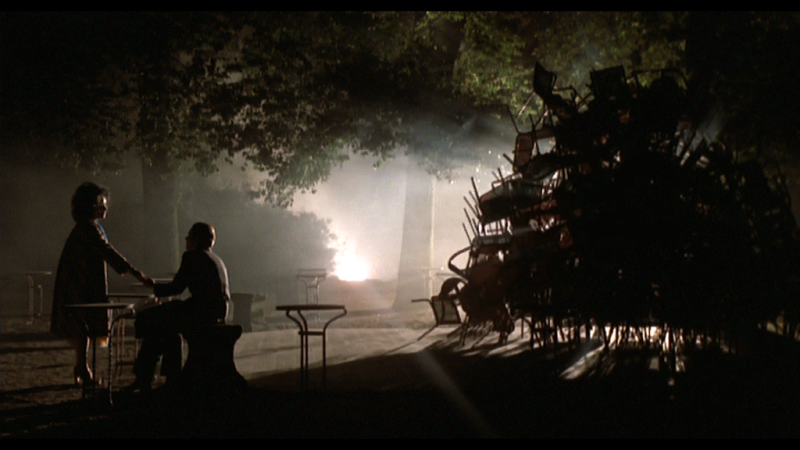 ﻿The Forgotten is a regular Thursday column by David Cairns, author of Shadowplay.﻿