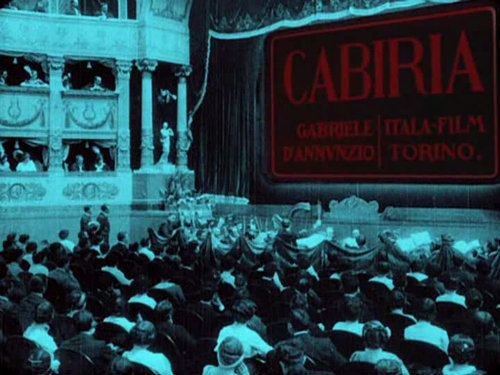 I remember seeing clips from Cabiria as a kid, in some silent movie clip show—I was terrifically impressed by the hulking slave Maciste, played by Bartolomeo Pagano, the closest thing I'd seen to a flesh-and-blood Jack Kirby superhero. The fact that Pagano had been a longshoreman, acquiring his musculature through actual physical labour rather than gymnasium-based masturbatory activities made him all the more impressive. Somehow you can tell honest muscle from the inflatable Schwarzenegger﻿ kind.

Well, Maciste was too popular a character for the screen to abandon, but Cabiria was a very expensive historical epic with massive sets and many costumed extras. Since the logic back in 1914 /15 was that sequels would gross less than originals (which proved generally true until recent years), some way to reduce the below-the-line was needed. 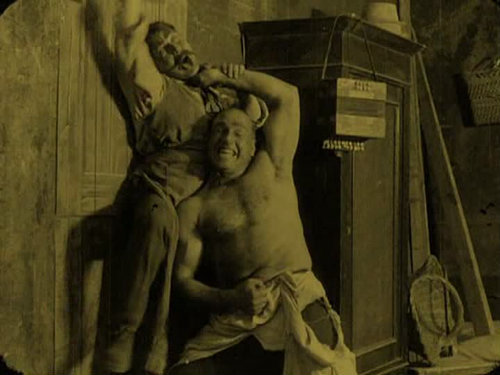 So, in Maciste (1915), Pagano plays himself, musclebound movie star, getting involved in a real-life crime caper—just like Jean-Claude Van Damme in JCVD.

The plot: there are goodies and baddies. What do you want from me, I don't read Italian. I stare at the letters until I go cross-eyed, but they refuse to resolve into meanings. I don't know what I'm doing wrong.

The heroine, fleeing evildoers, takes refuge in a cinema, and is impressed no end by Pagano as Maciste in Pastrone's Cabiria. She resolves to seek his help. We get a quick glimpse of an Italian movie studio of the period, and then the plot—a succession of abductions and rescues—kicks in. 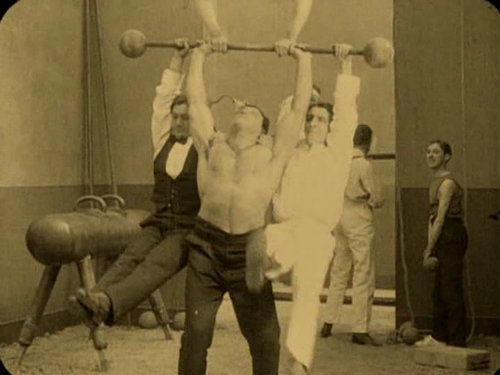 Above: "Three on a dumb-bell."

The heroine is continually dragged off by fiendish abductors and bundled into a waiting auto. I was awaiting eagerly the moment when Pagano would punch a jalopy in the radiator and cause it to collapse into a heap of scrap iron, like a clown car. Given his bulk and the rickety nature of 1910s transport, this would have been quite credible. But instead, he does other terrific things.

Having decided to rescue a damsel in distress (rather than go to the police—well, he's a movie star, naturally he thinks he can do a better job himself), Pagano/Maciste uses the power of acting, disguising himself as an old drunkard by donning a cotton wool Santa beard (he also uses his Cabiria bald cap and, later, full-on blackface). Then he beats up all the kidnappers with a table leg, heaping their battered bodies on a cart and wheeling it through town, presumably to the police station, although he may simply have tipped them all in the Tiber, I don't know.

But he also escapes a lethal trapdoor by a gravity-defying display of muscle magic, bracketing himself between two walls with only the power of dynamic tension to support him. He's quite the dude.

Look at this guy—a torpedo of testosterone. He's so manly, I bet he bleeds semen. He looks like he could rupture Chuck Norris with a single dark thought. Not only do "even his muscles have muscles," but those muscles have muscles, and so on into infinity. He has fractal muscles.

In one scene, a fleeing bad guy leaps from a moving train to escape Maciste, who simply reaches out and scoops the guy up again. In another, Mac can only be subdued during a barney with a kitchen full of assailants when somebody jumps on his back and garrotes him into unconsciousness. Awakening, our hero finds himself bound hand and foot, but still manages to snap his captor's spine. 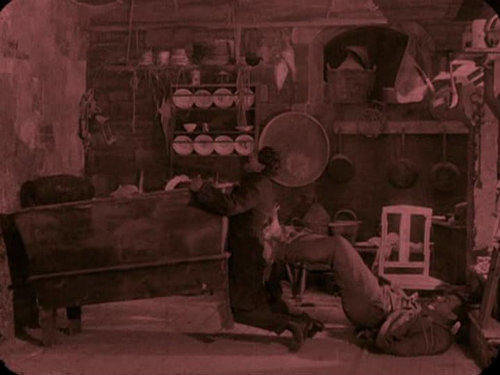 Then he picks up a small table with his teeth. Can Will Smith do that? Of course he bloody can't.

Stacking the table on another, bigger one, Mac scales the furniture mountain, still tightly hogtied, and punches through to the room above with his head. There he employs those powerful gnashers again to chew through the heroine's bonds. The guy is impressive. They've recently discovered that the stone heads of Easter Island have bodies buried under the soil. Mark my words, in a few more years we'll learn that they sometimes walk about and have sex with Italian women. That's the only possible explanation for Bartolomeo Pagano. 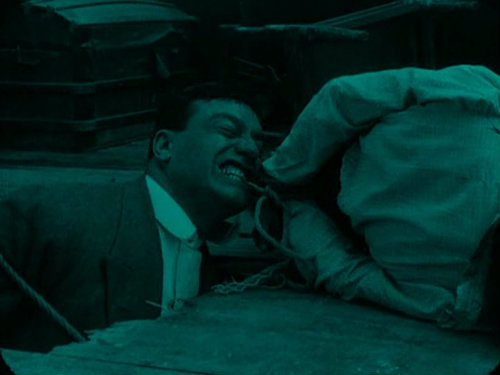 I get the feeling Mussolini was trying to be Maciste. Plus he had that protruding lower lip thing—well, Hitler had his Charlie Chaplin moustache, so Musso was no doubt trying to capitalize on Maurice Chevalier's appeal. 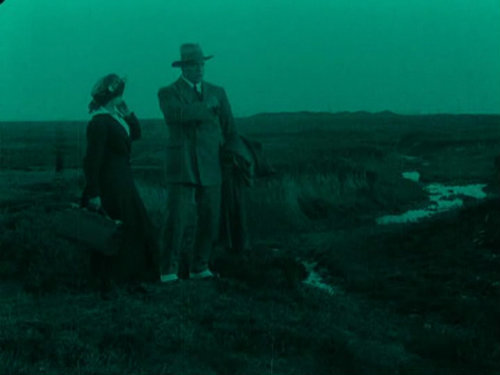 Above: "These marshes will all have to be drained."

Bad guys lock secrets in a desk, so Mac rips the whole top off the thing.  Then he throws some people across the room—editing convincingly makes it look like he's hurling them ten feet or more. Directors Denizot & Borgnetti generally compose elegantly in a simple, Feuillade-like style, but with the exploratory camera movements typical of Italian cinema in the teens. Every now and then the camera starts to track in, not dramatically, but more as if it just came loose and started to slide forward, almost but not quite bypassing the actors altogether and heading for the far wall. 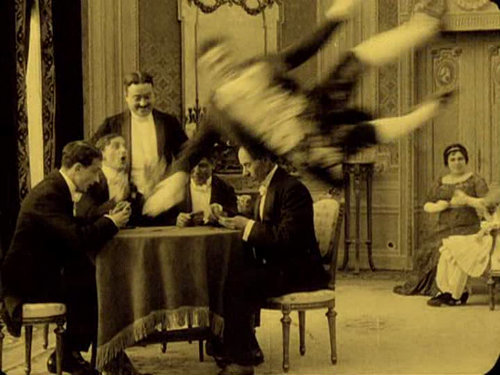 Above: "You just messed with the wrong stevedore-turned-actor."

Pagano played his signature role in an astonishing twenty-nine sequels, including the enticing-sounding Maciste in Love, Maciste Sleepwalks, Maciste Vs. the Sheik, Maciste Vs. Maciste and Maciste Vs. Everybody (this last one doesn't appear on the IMDb, but here's the poster). 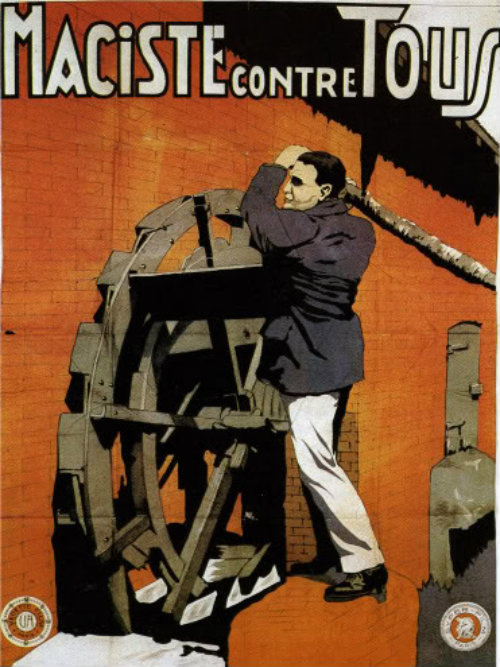 Apart from a couple movies at the end of his career (1929—I guess he wasn't comfortable with dialogue—they don't give you much elocution training down at the docks) he never played anything else.﻿