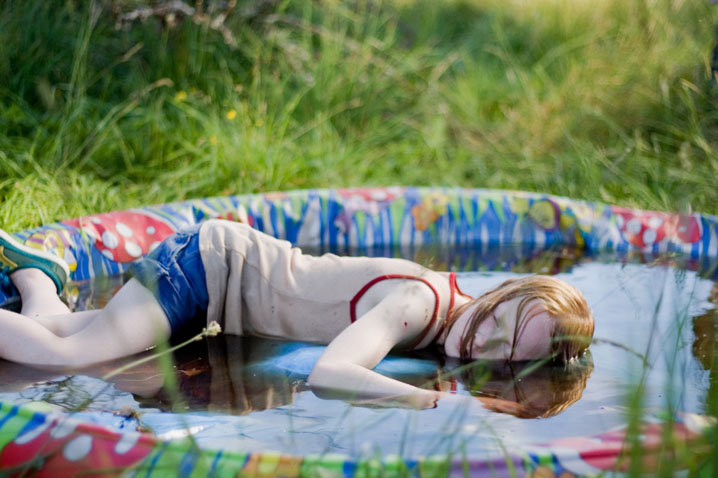 Before rounding up a bit of what the critics are saying about the narrative features opening in theaters this weekend, let's note that we've already got entries rolling on Ben Affleck's The Town and Mark Romanek's Never Let Me Go.

"It's the mesmerizing and unflinching face of 10-year-old actress Blanca Engström that makes The Girl such an immersive experience," writes Diego Costa in Slant. "Her parents, bored with the narrow-mindedness of the countryside, leave for Africa for a summer with their older son under the guise of philanthropy — but without their daughter, who is six months too young to go. The Janis Joplin-loving alcoholic aunt is summoned to babysit, but we soon learn that, while nothing compares to the perversity of children when they're around other children, it's the adults who act the most infantile in the absence of other adults."

"If a Grimm heroine were to resurrect herself in a late-20th-century body, that body would surely belong to the nameless waif in Swedish director Fredrik Edfeldt's slyly insidious feature debut," writes Ella Taylor in the Voice. "Gorgeously framed by cinematographer Hoyte van Hoytema, the Turner-esque beauty of the landscape at harvest time only adds to the creepiness as the Girl makes do, makes friends, and then unravels in the most creative ways."

"Movies about children fending for themselves are predicated on pushing prepubescent despair into viewers' faces, which only makes this Swedish film's graceful mixture of terror and transcendental girl power that much more impressive," finds Time Out New York's David Fear. 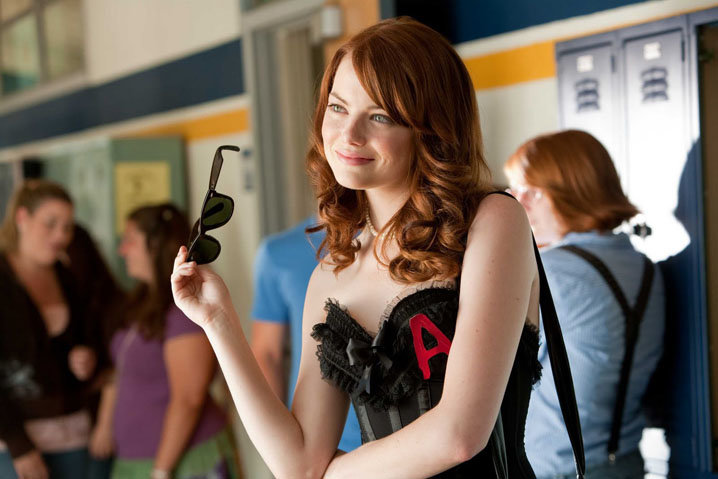 "Judged on a curve, set by the testosterone-fueled raunch-a-thons that have dominated teen comedies from American Pie to Superbad and beyond, Easy A deserves an A+, with extra credit for lack of misogyny, cock talk, or flatulence," writes Eric Hynes for Movieline. "But curves or concessions aren't necessary. Not when the film exhibits this much wit and intelligence, and not with Emma Stone casually owning the screen and turning this buoyant lark into a star-making vehicle of Pretty Woman proportions."

Nick Schager, writing in Slant, disagrees: "All the self-awareness and saucy banter in the world can't make Easy A consistently funny, nor can the copious snark, tired 80s references, and glib Scarlet Letter parallels that define its story. A lack of wit is, of course, to be expected from Will Gluck, director of last year's insufferable Fired Up, though not from star Emma Stone, whose self-possessed, hot-yet-relatable charm is squandered by a tale short on the vivacious cleverness needed to achieve its Clueless dreams."

"In addition to the Web's up-to-the-nanosecond commentary on culture and all its attendant warring, lately cinema is full to brimming with Internet-inspired entertainments," notes Kimberley Jones in the Austin Chronicle, "from the absorbing late-summer documentaries Winnebago Man and Catfish to narrative features like the end-is-nigh (or at least the end of any forward movement for feminism) comedy The Virginity Hit and David Fincher's hotly anticipated chronicle of Facebook's first steps, The Social Network. Easy A, too, riffs on social media's Big Brother-like shadow; when a rumor kick-starts about the devirginizing of its heroine, high school senior Olive (Zombieland's Stone), it spreads like — what else? — a virus via text and Twitter." Her bottom line: "It's a keeper."

"Here's what's wrong with Easy A," according to Noel Murray at the AV Club. Screenwriter Bert V Royal and Gluck "rely too much on teen movie clichés for their high school spin on Nathaniel Hawthorne... then try to excuse them by directly acknowledging the swipes. Also, Easy A could've stood to be a little gutsier when it comes to challenging a high school culture that prizes sexiness but not sex. Now here's what's right about Easy A: everything else." 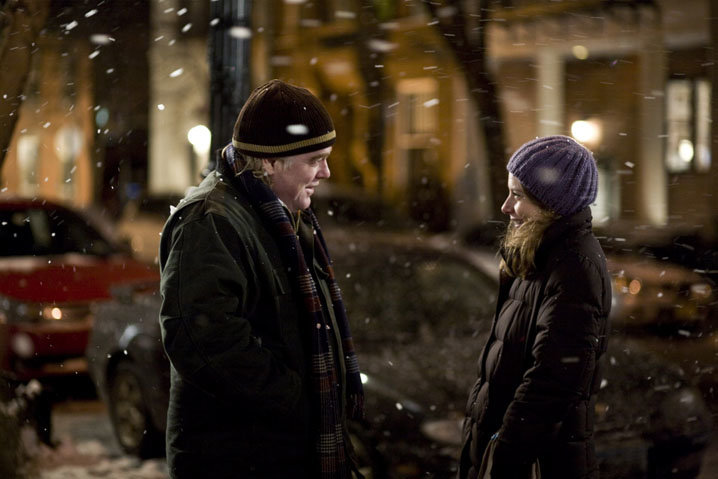 "It isn't surprising that a theater lover like Philip Seymour Hoffman would tackle an Off-Broadway show he once starred in for his directorial debut," writes Aaron Hillis, reviewing Jack Goes Boating for Time Out New York. "As the titular limo driver and foolishly dreadlocked reggae enthusiast, Hoffman predictably knocks a familiar role out of the park (and just as unsurprisingly, wrings excellence from his performers) in this rather trivial, downbeat four-hander about a working-class couple trying to connect during a Gotham winter. But for a guy who has already exceeded his career quota in portraying tragicomic sad sacks (Boogie Nights, Happiness, Love Liza and on through Synecdoche, New York), why pick yet another schlemiel?"

Writing in the Los Angeles Times, Gary Goldstein notes that Jack harks "back to such small, sensitive dramas as Paddy Chayefsky's 1950s classic Marty, to which Jack owes a distinct shout-out. And therein lies the good news-bad news about Jack Goes Boating, which follows the slow-cooking romance that occurs between lumpy limo driver Jack (Hoffman) and timid funeral home worker Connie (Amy Ryan) while the married friends who introduced them, Clyde (John Ortiz) and Lucy (Daphne Rubin-Vega), are coming apart. Although it's refreshing to see a movie not laser-focused on instant gratification, über-hip attitudes or characters created to satisfy cinematic safety standards, [playwright and screenwriter Bob] Glaudini and Hoffman... honor the piece's theatrical roots a bit too slavishly for its own good." 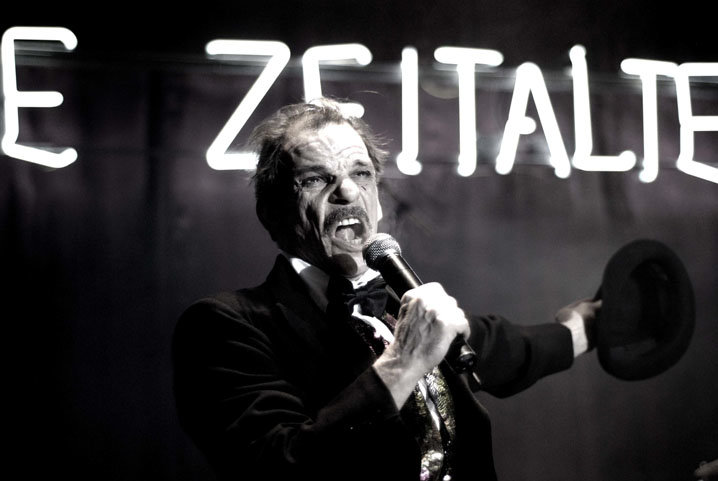 "Bizarre and beautiful, disturbing and droll, The Temptation of St Tony wonders what it means to be a good man," writes Jeannette Catsoulis in the NYT. "Kicking off with a quotation from Dante's Inferno, this delirious sophomore feature from the Estonian filmmaker Veiko Ounpuu observes Tony (Taavi Eelmaa), a triumphantly depressed middle manager. Dissatisfied with his adulterous wife and a boss who orders him to sack all his factory workers, Tony descends into a midlife crisis that manifests itself as a series of increasingly hilarious, horrific visions."

"Once upon a time, while vacationing in Estonia, Béla Tarr watched a double-bill of Dead Man and Lost Highway and went to sleep," whispers Michael Tully at Hammer to Nail. "Then he had a dream. The Temptation of St Tony is that dream, transferred to black-and-white 35mm celluloid. Okay, maybe it isn't, but if that concept makes you perk up, Veiko Ounpuu's blackly comic fever nightmare is bound to deliver."

"This is the kind of film in which a stranger stops the main character in the street only to recite William Blake and light a cigarette," notes Diego Costa in Slant. "There are moments that belong in an Eric Rohmer and a Luis Buñuel dinner scene simultaneously, as when a conversation over wine about psychotherapy gives way to one about American swinging (not the dance, but the wife-swapping kind)."

TONY's David Fear: "Should anybody propose remaking the art-house monolith Satantango as a pitch-black comedy-cum-biblical-parable, we'd like to inform you that you've been beaten to the punch." 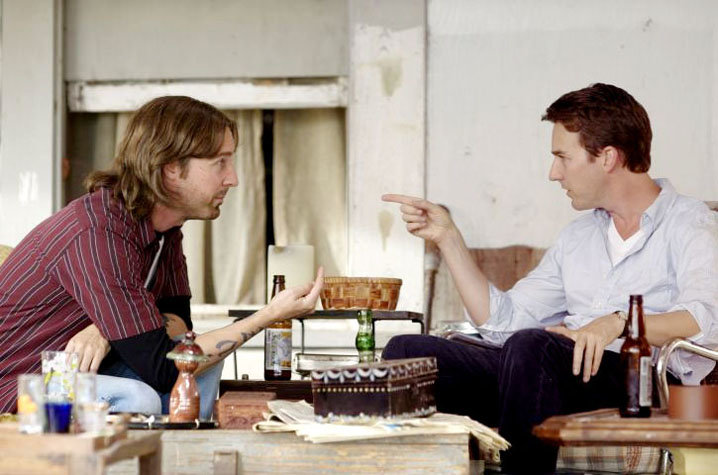 "Melding stoner comedy, philosophical inquiry, family reconciliation drama, and same-actor-playing-twins cine-stunt, Tim Blake Nelson's film isn't an even-keeled endeavor, prone to lurch at a moment's notice between storytelling veins," wrote Nick Schager in Slant, when Leaves of Grass was originally slated to open but was then suddenly yanked. But I've interrupted Nick Schager: "That bumpiness correlates directly to the saga of clean-cut Bill Kincaid (Edward Norton), an esteemed classical philosophy professor at Brown who lectures about Socrates's belief in man's need to control himself — and the dangerous illusion of thinking one has succeeded in this regard — and then finds those ideas corroborated once he's duped into returning to his long-abandoned Oklahoma home by identical twin brother Brady (also Norton)."

"As with so many professorial types in the movies, [Bill's] carefully held scholarly ideals need to be largely abandoned so he can accept life's messiness, let other people in, etc," writes Matt Connolly in Reverse Shot. "This is what proves most troubling about Leaves of Grass: Nelson's simplistic and vaguely anti-intellectual message of embracing life's 'unpredictability.' For a film that sincerely namedrops the great thinkers, such a pat understanding of the human condition puts Leaves of Grass in a state of internal conflict that it never figures out how to resolve."

But is it funny? Well, Neil Genzlinger (NYT) finds it "funny and unnerving at the same time. Mr Norton is a pleasure to watch, and so is everyone else. You know you're in good hands when your minor roles are played by Susan Sarandon (the twins' off-kilter mother) and Richard Dreyfuss (a Jewish drug lord who calls in the debt Brady owes him). And the soundtrack has John Prine, Steve Earle and more."

"In The Freebie, Katie Aselton's look at the unraveling of a young couple's marriage, the director calls on the whole range of documentary techniques to signify the sort of laying bare of the truth that her intimately detailed screenplay can't quite manage," writes Andrew Schenker in Slant. Notes Justin Stewart in the L Magazine: "The 'freebie' of the title refers to the deal between Annie [Aselton] and Darren (Dax Shepard) that makes it okay to fuck another person. Emotional chaos ensues, but it's not necessarily worse than the relational stagnation that already exists." More from Stephen Holden (NYT), Nick Pinkerton (Voice) and James van Maanen. Alison Willmore and Matt Singer: "Infidelity in movies tends to have notably dire consequences, acting as a gateway misdeed that leads to worse things, or resulting in stalking, or despair, or a disproportionate amount of death. This week on the IFC News podcast, we talk about films about cheating."

"From the slush pile of M Night Shyamalan comes Devil, a silly horror-thriller about a group of people trapped in an elevator with Satan incarnate," writes Scott Tobias at the AV Club. "It's Agatha Christie meets Final Destination as one of them picks off the others, one by one, whenever the elevator car loses power." Interviews with the filmmaking brothers John and Drew Dowdle: Megan Angelo (Wall Street Journal), Todd Gilchrist (Cinematical), and Gina McIntyre (Los Angeles Times).

"Last Day of Summer had a chance to be a decent movie, but Vlad Yudin, who directed and wrote it, couldn't resist a potty joke. A long, grating potty joke." Neil Genzlinger explains in the NYT.

This week's animated feature, Alpha and Omega, is basically "a shameless mélange of plot elements from already generic Disney knockoffs," according to Vadim Rizov in the LA Weekly. More from Mike Hale (NYT), Nick Schager (TONY) and Glenn Whipp (LAT).

Criterion's Current rounds up repertory screenings happening all over. The week-long Boston Film Festival opens today and Peter Keough has a preview in the Phoenix. Michael Hawley has an overview of the San Francisco Latino Film Festival, running through September 26. Ingmar Bergman: Truth and Lies has opened at the Academy in Los Angeles and Susan King lists other goings on in the LAT.

Ken Loach will be delivering the keynote address at the London Film Festival this year. Stuart Kemp has the story in the Hollywood Reporter. Those dates again: October 13 through 28. Previews: Dave Calhoun (Time Out London) and Neil Young.

"Character actor Harold Gould, a familiar face with more than 300 television shows and 20 films to his credit, died over the weekend at the age of 86," notes Sean O'Neal at the AV Club, and he's got clips. More from Glenn Kenny.