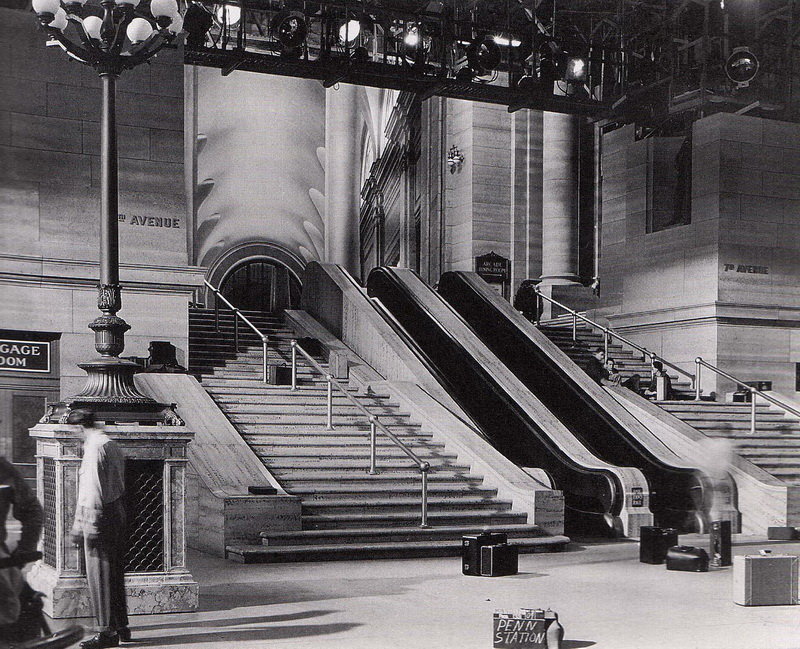 Above: The Penn Station set for The Clock.

"Loving evaluation of texture, the screen being filled as a window is dressed in a swank department store." —Orson Welles

If we accept Raymond Durgnat's theory that in cinema, landscape is the equation of the state of the soul and architecture constitutes an X-ray photograph of the heroes'1, then Minnelli's films, especially musicals and melodramas, can be described as full-color X-ray photography of the inner universe of his characters, with a particular interest in artists, daydreamers, painters and dancers.

Minnelli's films generally happen in strange places. In his musicals the absence of modern urban life (unlike Stanley Donen, for instance) is noticeable. The real is recreated by studio-manufactured settings, where also the unreal, the fantasy, takes place. Minnelli's films are the encounter of two worlds, two parallel lines, which in reality never happen to cross each other. Although it is true that even the "real world" in a Minnelli film is visually more striking than most of the Hollywood films we know, he manages to go beyond that and create magical moments in which the viewer feels that he or she is watching sheer, untouched beauty. In such scenes (the last sequence of An American in Paris, for instance) one tempts to see the whole film as something to lead the audience to the moment of emotional and audio-visual eruption. As if the whole structure is built to highlight the rareness and transiency of beauty which comes fully to life in a dream.

Still, Minnelli contradicts this attitude toward beauty by placing a character in the centre of a dream that eventually leads to anguish and pain. All of his heroes become sleepwalkers, forever lost in the labyrinths of their dreams. Minnelli characters, like late John Ford heroes, tend to wander between two worlds, having no place in any of them.

All Minnelli's jobs prior to his filmmaking were related to his sensibility and ingenuity, and almost all of them can be traced throughout his four decades of filmmaking. He wanted to become a painter, but it didn't happen the way he envisioned. Later, as if the themes that demanded a careful attention to the visual aspects of the film weren't enough for him, he made his characters artists, painters, architects, designers and ultimately filmmakers.

His first professional job, long before he began directing films, was to design Chicago shop windows, and the relationships he visually created between "attraction" and "commerce" set up his style, foreshadowing the nature of what he would achieve later in the Freed Unit2. 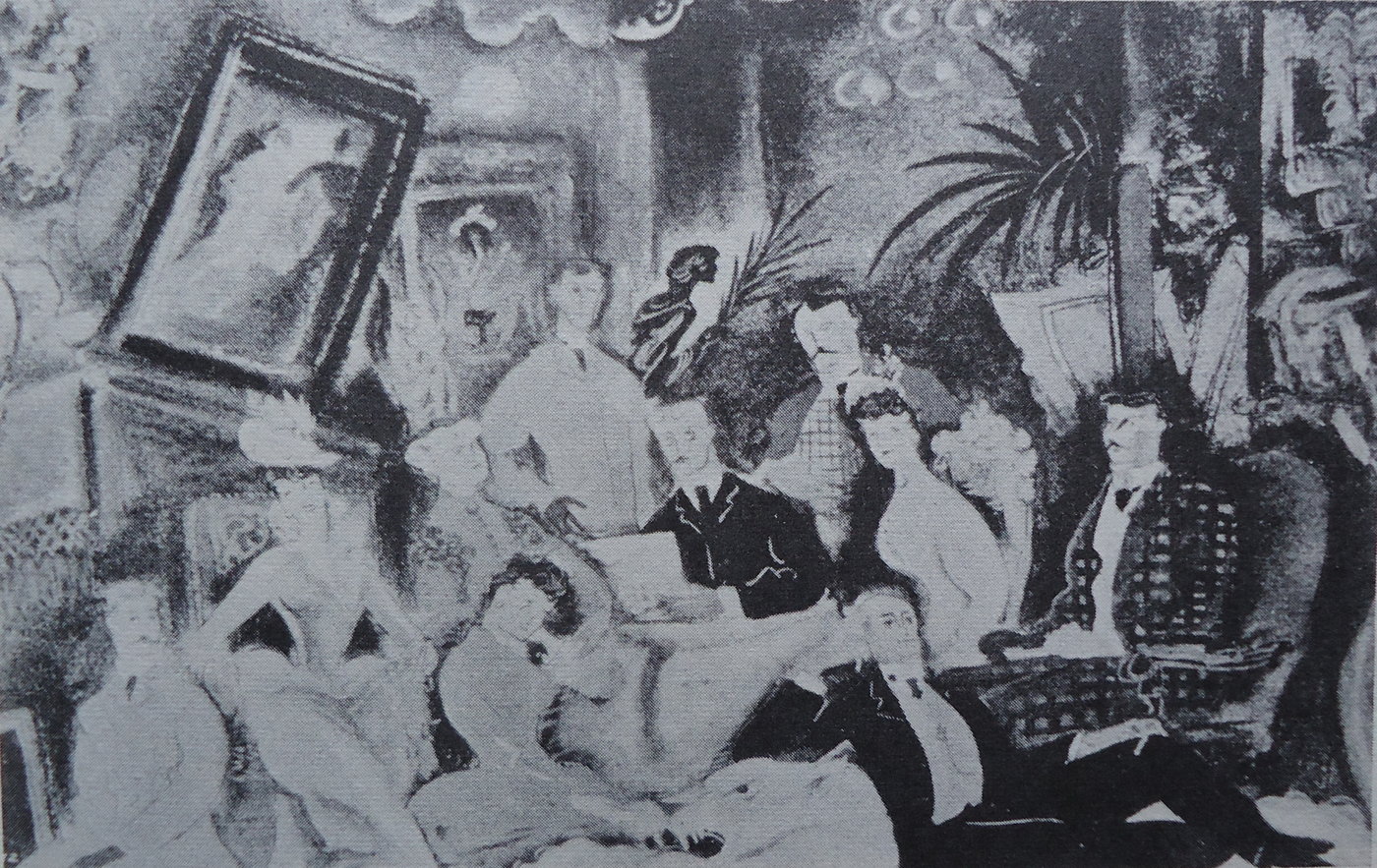 On Minnelli's first assignment, when the art director of Cabin in the Sky showed his sketches of a Southern house, the director was enraged by its shabbiness and "realist" approach to the sets, demanding a decent and "beautiful" design for the house of main characters. Although,later on this "realist" style brought an Oscar for To Kill a Mocking Bird, it involved a design approach that never thrived in Minnelli's imagination. Yet we shouldn't mistake his style as a just merely decorating a story. Minnelli strove to create a space to express the feelings of his characters who inhabit them even if this meant departing from reality.

Richard Dyer, in his introduction to the series "Vincente Minnelli's Set Pieces," compared the breathtaking hunting sequence of A Home from the Hill (a melodrama) to a tragi-musical number, the killing scene from Brigadoon (a musical), arguing that the two set pieces are very similar, perhaps even the same. Musicals and melodramas, at least from a terminological standpoint, have one thing in common: music. Whether it is music with the drama (musical), or the drama with music (melodrama), the musicality of emotions, the driving force of the musical genre, dictates the structure of Minnelli's film. Thus cinematic space needs to intensify the climaxes of the film, and in all of his better works it does.

In both sequences, escaping an old world and entering the new one is the source of tension or tragedy, and it has something to do with death, like the end of a dream. Does Minnelli see life as a dream?

Even when the setting is well-known and familiar to the audience, like a landmark site (Penn Station in The Clock), Minnelli is capable of fantasizing the real. In an analysis of The Pirate (1948), Serge Daney3 interprets space, rather than sets, as what defines this dream world: "[a] Minnelli decor is different from that of other filmmakers. Cinema for a long time had no fear of overpopulated stages and images, knew how to make Judy Garland and Gene Kelly move without ever bumping into each other. When that does happen it's a sign that they're losing their footing, and that their power to dream has been diminished. It's at the moment when Serafin, unmasked, is speechless before Manuela, who is beside herself, that, very discretely, he bumps into a humble chair. Kelly's talent is knowing how to do this elegantly. It lasts a second and is very beautiful." So one of the filmmaker's most employed narrative innovations is the ability to set emotions as catalysts in shaping cinematic space and architecture. In this respect, his films mirror F. W. Murnau's Nosferatu, where every arc and curve on the walls and ceilings is formed by the shape of the monster.

It was the jobs that Minnelli held in his pre-filmmaking years, designing sets and costumes in New York City for musicals, creating backdrops and deciding on what props and furniture should be used on the stage that molded his style and unique visual touch. He mostly expressed himself by using the familiar elements of architecture and design, only subverting them, so that his new milieu (and therefore, the new narrative) gave a fresh identity and meaning to familiar and banal objects and spaces. For instance, in two important scenes, first in Meet Me in St. Louis and then in The Clock, extinguishing the lights in a scene changes the tone of the story. In the high-angle shot of both scenes, the couple under the dominant decorative presence of the chandelier experience a new level of intimacy, whether sexually (St. Louis), or emotionally (Clock). Such feeling is only delivered when the relation between the actors and the sets undergoes an abrupt change.

The specific things Minnelli did in theatre, such as designs based on surrealist and impressionist paintings, made him one of the most design-oriented filmmakers in history of cinema, a man whose work is a mélange of various arts, and even various cinematic styles (in the theatre years he was studying films of Jean Cocteau, Carl Dreyer and Luis Buñuel﻿, as well). Probably one of his greatest arts lies in the fact that he makes the actors to interact with the architecture and space, and in this respect his camera barely stays static and objective.

The "look" of his films were—if not the main excuse to make them—at least the main driving force behind Minnelli's creativity. Stories functioned merely as a lawn to plant lavish red flowers in. The world Minnelli imagined could only existed in a visual art form, capable of putting the audience inside a fantasy to show him/her the constant threats that endangers such world. For that, Minnelli needed to use architecture, interior design, landscape and the cityscape to create his alternate realities, three-dimensional universes inside viewers' minds.

From 3 April to 31 May, BFI Southbank in London is hosting a retrospective of Vincente Minnelli's films. Forty years earlier, a mini-season of Minnelli was organized by University of Sussex, Thomas Elsaesser of Brighton Film Review complained about the empty seats during the season which reflected the questionable obscurity of a filmmaker who had given many pleasures to both average and elite filmgoers. Unlike, let's say, Hitchcock, it took a long time for Minnelli to come to the foreground as a great stylist and auteur. Now, with at least two analytical books written about him and a theatrical re-release of Meet Me in St. Louis last winter, things seem to be drastically changing. ﻿

2. A highly productive team of filmmakers in MGM studios, under the direction of the creative producer, Arthur Freed whose collaborators included the best songwriters, choreographers, dancers, stars, directors and technician for making musicals. This unit is responsible for producing some of the best musicals of the 1940s and 1950s, with Minnelli's color musicals at the top of the list.﻿