With 2009 rounding to a close, it already feels like best-of and top-ten lists have been pouring in for months, and we’re already tired of them: the ranking, the exclusions (and inclusions), the rules and the qualifiers. Some people got to see films at festivals, others only catch movies on video; and the ability for us, or any publication, to come up with a system to fairly determine who saw what when and what they thought was the best seems an impossible feat. That doesn’t stop most people from doing it, but we thought we’d shake things up a bit. Last year we polled the contributors to The Notebook to find some general consensus on what movies everyone liked. For our 2nd Annual Writer’s Poll, we’re doing things differently.

I asked our contributors to pick a single new film they saw in 2009—in theaters or at a festival—and creatively pair it with an old film they saw in 2009 to create a unique double feature. Some writers chose their favorites of 2009, some chose out-of-the-way gems, others made some pretty strange connections—and some frankly just want to create a kerfuffle. All the contributors were asked to write a paragraph explaining their 2009 fantasy double-feature. What's more, each writer was given the option to list more pairings, without explanation, as further imaginative film programming we'd be lucky to catch in that perfect world we know doesn't exist but can keep dreaming of every time we go to the movies.

How would you program some of 2009's most interesting films into double features with movies of the past? 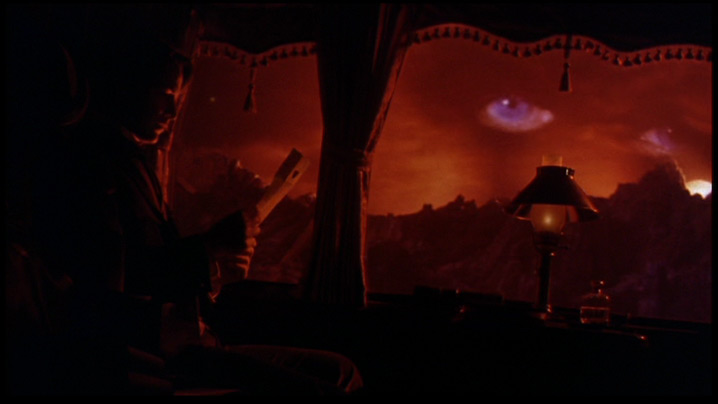 A pop culture poisoning need not be without a little antidote.  If there's any good to come out of the record-breaking New Moon and more general vampire craze of the latter half of the decade, may it please be that it leads more folks to queue up Coppola's incredible ode to an entire century of pre-CGI cinema, brimming with enough spectacular in-camera innovations to suck the blood out of any of the aughts' digital hordes or bomb-blastic end of the world set-pieces.  A reminder that they don't make 'em like they used to. 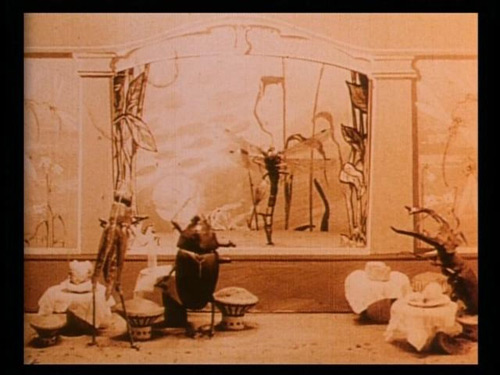 Wes Anderson's Fantastic Mr. Fox tickled me in all the right places and who cares if it's too adult for kids or too childlike for adults, I liked it—and would pair it unhesitatingly with great puppet films of the past—Starewicz's nightmare taxidermy fantasies are obvious cousins, so maybe The Cameraman's Revenge? That's pretty short, so throw in Jirí Trnka's Kafka-esque The Hand for luck, and maybe Svankmajer's Dimensions of Dialogue. Because you can't have too much twitchy puppet strangeness in your life.

It might be that our first love, the one that drenches everything in Eastmancolor, never really goes away. But love is always tangled up with hoped-for futures, some of which will slide past us before we can grab them. We make the best of what we're given, and can hold on to, and in the end find something else—unplanned for, but existent, and in its own ways beautiful. Even victories, then, are moments of loss, but ones that open up new possibilities. We find new things to love, and in this way pay tributes to all the loves we've had before.  The Umbrellas of Cherbourg and Up are twinned movies—full of eye-popping color, of compromises and commitments, of intense loss and its antidote. Both capture a certain kind of mixed sadness, one that contains its own redemption. I can't imagine a more terrific, heartbreaking, tearful, ecstatic, and beautiful double feature.

There's a little known film by Louis Feuillade, about 30 minutes long, called Erreur tragique, which I finally saw earlier this year (I should've waited, spent time on something else; it came out on a very fine DVD 8 months later). His future Fantomas, René Navarre, is a well-off man who goes to see an Onésime one-reeler while on a business trip to Paris. In the background of a shot, he sees a woman walking arm and arm with a man. "That's my wife!" he shouts in the intertitle; the theater is dark, and we don't know whether he really says it or simply thinks it, but either way it's a shout, a shock. He buys a print of the film from Gaumont and snips the the frames out so he can examine them more closely with his loupe. He is enraptured by a sort of cynical fantasy—his wife is having an affair, he starts to think, and therefore he must kill her. He's intoxicated by his doubt.   Erreur tragique would make a good short to show before a screening of Duplicity, which is sort of like The International played as a romantic comedy (or maybe The International, which was made and released around the same time, is Duplicity taken seriously). The film could have been called Erreur comique (over time, tragedy becomes comedy): a Yasuzo Masumura plot, a Tashlinian comedy of brand names with Wilderian characterizations and a heavy dose of Soderbergh, whose own The Informant! could take Duplicity’s place in this double feature. Tony Gilroy’s film is a romantic fantasy built on a foundation of despairing cynicism, the story of two lovers whose attraction is based on their total inability to trust each other, a scenario as intoxicating as the suspicions that charm the husband in the Feuillade. It's very comforting to suspect others and to think of the world as being turned against you. But they were, really, puppets all along, and their cynicism, like the husband’s assumption of his wife’s infidelity, was always just a fantasy.

Ten double- and triple-features for 2009: 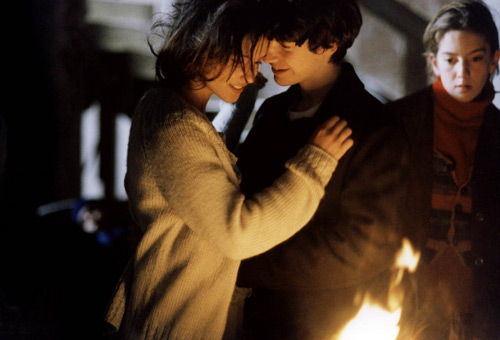 While the correlation between the two is fairly obvious, seeing these particular Assayas films within the same year felt like a perfect union. While L’eau froide directly addresses the past (it’s set in 70s and partially based on Assayas’ own teenage years), Summer Hours reflects upon it in a contemporary setting. The three Marly siblings (Charles Berling, Juliette Binoche, Jérémie Renier) survey the belongings of their deceased mother Hélène (Edith Scob), assessing the value, both sentimental and monetary, of what’s left behind. I can’t help but imagine that what the characters in Summer Hours are doing is precisely what Assayas accomplished in making L’eau froide. L’eau froide is many (wonderful) things, but on some level, it serves as Assayas’ personal cataloguing of the recent past, an appraisal of memory with the goal of bringing out the things, or moments, that hold the most emotional weight. The astounding final sequence in Summer Hours mirrors the centerpiece of L’eau froide, a huge party in the middle of the woods where the film’s teenage lovers Gilles (Cyprien Fouquet) and Christine (Virginie Ledoyen) reconvene after Christine breaks out of a mental hospital. Both films examine the bittersweet nature of memory, but Summer Hours provides a feeling of sanguinity that’s uncommon for the director, seen best in the discussion between Berling and his wife (Dominique Reymond) about their children’s planned party and the closing bit where their daughter (Alice de Lencquesaing) expresses her own recollections of Hélène’s house. Have the teenagers of L’eau froide grown up to amend the mistakes of their parents and has it passed on to their offspring? That answer isn’t a simple one, but I can’t think of a more sublime double-feature for that question to be pondered.

Alternate Double-Features for 2009, older films viewed for the first time this year paired with 2009 releases:

The only thing that mattered this year was the Nicholas Ray retro at NYC's Film Forum. I'm sure plenty will say that Miriam Bale's "Late Film" series at the Broolyn Academy of Music took the cake, and I wouldn't be one to argue with them. (It's all in the timing, and when you're trying to graduate from college, you make the mistake of skipping Track of the Cat and 7 Women. Whoops.) The other major discovery since the calendar turned was James Gray. The whole idea of the man seemed ridiculous. And then I saw his movies. Ray's movies depict the challenges of preserving communities, especially romantic ones. Gray's do the same thing. The idea crystallizes in The Lusty Men and Two Lovers, films in which the idea of happiness—a traditional way of living—is a struggle that the protagonists may never overcome. For one, this quest ends in death; for the other, it ends in betrothal. The ambiguities of modern romance are lovingly, uncondescendingly imagined, the final shots leaving the surviving couples in a state of emotional suspension. Now if only Arthur Kennedy could've smiled at Susan Hayward in the same hesitant manner that Joaquin Phoenix smiled at Vinessa Shaw. 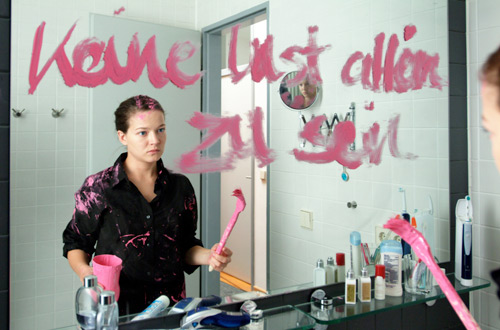 It wasn’t the best film I saw in 2009, but it’s the one that stayed with me the most. Deceptively simple yet deliciously subversive, Pink, a satirical romcom about a punk poetess who juggles three men is yet further proof that Thome, now seventy years old, has created some of the most memorable female lead characters in contemporary German cinema. I’d love to see this latest film of his paired with Red Sun, his feminist neo-noir from 1970 (with its tagline “Let’s Kill All The Men!”) that took a decidedly radical gaze at post-summer-of-love German hippie culture. Whereas 60’s icon Uschi Obermaier used guns in Red Sun, Pink’s Hannah Herzsprung lobs words as her weapon of choice. Though he’s grown far more cynical with age, Thome remains a dedicated social critic, and one of Germany’s most dynamic auteurs. That he’s virtually unknown in the States is nothing short of tragic.

Young lovers and older perhaps-lovers. Amour fou. The irrational. Pursued: by unnamed inner demon, or a red-faced matriarchal representation of one. Sex and violence. And not so much. Loud music. Movie references. Physical representations of emotional states/attitudes. Particularities of the feminine toilette (cotton balls/long baths). Unsettling cinematic exhilaration.