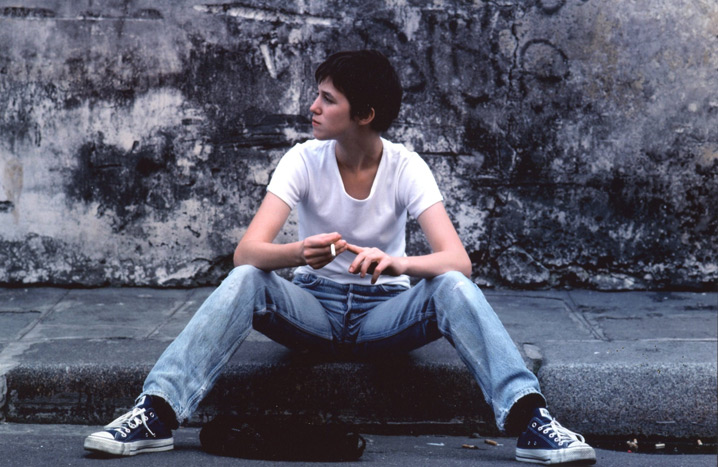 New York theatergoers have had opportunity to see eleven rare films by French director Jacques Doillon in the last twelve months: mostly due to the tireless efforts of Marie Losier at the French Institute/Alliance Française, with a few assists from the programming team at the Brooklyn Academy of Music. It's clear at this point that English-language film scholarship is completely in the dark about Doillon: the films with some small American reputation or distribution are no better or worse than the ones we've never heard of. The latest case in point is Doillon's dazzling 1992 Amoureuse, which screened at FIAF on February 9 in an ongoing series devoted to Charlotte Gainsbourg.

The basic idea of Amoureuse couldn't be simpler: a love triangle, period. Marie (Gainsbourg), committed to her boyfriend Antoine (Thomas Langmann), does a 95%-effective job of resisting the ardent courtship of a filmmaker (Yvan Attal). But Antoine sniffs out the 5% and reacts with an anger and jealousy that drives Marie into an uncertain balancing act between the two men.

Doillon, working with his frequent co-writer Jean-Francois Goyet, uses this simple story as a springboard for his imagination, and crams the film's 99 minutes with as many elaborations and offshoots of the situation as he can think up. And he can think up a lot of them. Amoureuse feels in different ways like both a minor and major work: minor in the slightness of the central concept and the seeming sense of writer's improvisation in filling out the corners of the story; major in that the concentration of emotion and behavioral surprise is astonishing. In some sense all Doillon films, no matter how realistic or socially aware, are fantasies, in that the flow of inspiration comes from Doillon's pleasure in imagining people as he loves them and wants them to be. Even more than with the father-daughter sparring in the great La vie de famille (1985), Doillon inhabits and inspires all of the characters in this triangle: the distinctions among them correspond more to Doillon's different aspects than to true character differentiation. And, despite the film's evident formal command, its brilliance stems directly from Doillon's qualities as a person.

The talk in Amoureuse is non-stop, usually about the film's big issues, and full of self-observations, observations about others, jokes. Verbal inspiration is in the air, and it descends upon everyone: on secondary characters like Marie's sister Juliette (Stéphanie Cotta), who is introduced offhandedly in mid-film and gradually gets more and more of the smartest lines; on bit players like the pickup artist at a club Marie visits, to whom Doillon amazingly gives a second, more considered shot at Marie before his exit; even to off-screen characters like Antoine's mother, whose insight about Marie is relayed to us via a telephone conversation with Antoine: "She says you out-pious the Pope."

Heading straight into the emotional extremity that he loves, Doillon is already pouring out the details of Paul's aggressive/desperate play for Marie on the soundtrack under the opening credit cards. No sooner does the sprinting story take up a character than he or she is plunged into deep emotional waters. Doillon's people generally start shedding tears or storming out of apartments early in our acquaintance with them; and they almost always make a certain number of moves out of powerful motivations that they do not completely understand. Yet, though half victims of love, they are also half script strategists: Doillon loves the part of them that thinks through and around their turmoil, coming up with ideas to change their lives, sooner or later finding moments of detachment and wit. The many shifts of the story are impelled by the characters' need for a new or different perspective, a need that suits the riffing filmmaker well. The rival guys will meet and form an uneasy but real connection (the comic high point of the film is Paul's demonstration to the jealous Antoine that it's not always easy to avoid a kiss); Juliette is first a confidante for Marie, then a sexual outlet for Paul, and eventually a source of droll humor. Everyone plays multiple roles that reflect their own conflicts between action and detachment: Paul grimly takes on the job of patching up Antoine's quarrel with Marie, even as he courts her; Juliette falls for Paul and allows herself to be used by him, all the while helping her sister connect with him. The total adds up to Doillon's unruly yet coherent ideal: of life emotionally charged to the point of destabilization, yet considered enough to be lived with affection and intelligence.

The ever-evolving story threatens to spin out of control in its final stages, as an increasingly erratic and distraught Marie is driven to extreme gestures. But the center somehow holds: one of the characters will always be clear-headed, detached from his or her own crisis, and standing by to orient the others. In the last scene, Doillon and Marie allow themselves a bit of symbolic fun: as the three protagonists walk on the street, she takes the arm of one boy, then both, and uses their support to kick her feet in the air, with a smile that tries to summarize and dispel all the pain that the three have suffered. But Doillon will not permit himself a simple ending, and the film lasts long enough to dissipate Marie's hopeful gesture in a maze of graceful, solemn reverse tracking shots that reckon up the characters' gains and losses.