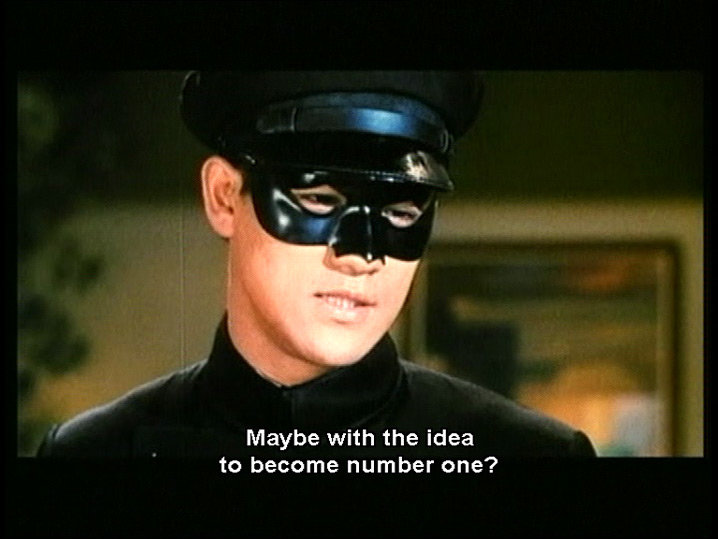 When I was a teen, I loved to watch the "The Green Hornet" on TV. We had it in Europe too.  I didn't have the faintest idea about the kid with a Japanese name who was so attractive and quick. I just knew he was Chinese in spite of the name.

Many years later, in the middle of the (absolutely non-predetermined hence strikingly disappointing) boredom I felt watching Michel Gondry's film version of The Green Hornet, I tried to understand what a good-willed viewer like me was going through. My ears gave me part of the answer: in almost every "comedy" scene (non-installation, non-action), the soundtrack simply vanishes. No soundtrack anymore except for a few basic noises and an ugly mix of the actors' voices, giving way to the intergalactic silence of the average sitcom. The non-sound of Friends. A space to be filled by the audience's pre-recorded applause? Not even the most daring critic would (I think) call this unexpected television aesthetic an "experiment in hybridity." It does provide a technical clue about the production process of The Green Hornet, though.

Another answer (again, only for myself) came while watching Jay Chou bravely but unconvincingly throw a few kicks and punches, and while the "spectacular" climax idly unfolded at the ending: most obvious in the film is an absence of decoupage. Gondry destroys the set instead of creating a dynamic of destruction.

Unlike the Wachowski brothers, Gondry's producers seemingly did not care much about storyboard, nor bother to hire an action director /choreographer to design the action and train the actors. Master Yuen Woo-Ping, I missed you, and so did they. They probably were too busy confusing stand-up wit for irony.

But all in all, I was happy to go back to Bruce Lee (see his Green Hornet screentest), and to notice, once again, the lightning speed of his movements, the elegance of his postures, the strength of his crying out his breath (letting the qi out) and even the ugliness of the white waiter's suit they had him wear. Ugly but straightforward. No wit. He did not need any action direction, nor a choreography: the producers of the 60s somehow felt that he himself was it.

Michel GondryThings That Came to My Mind While I Was Watching the Film
6
Please login to add a new comment.