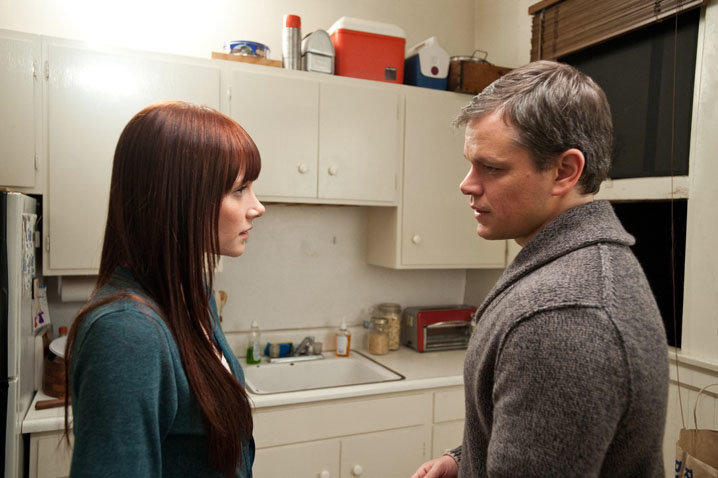 "Clint Eastwood's Hereafter opens with the most exciting, expertly assembled flood scene in movie history," declares Time's Richard Corliss. "A tsunami gathers force in its path toward an Asian beach resort, swatting a large ship as if it were a toy boat.... At Hereafter's world-premiere screening on Sunday at the Toronto Film Festival, the 1,500 spectators in the Elgin Theatre gasped as one — one frightened, enthralled child at the ultimate Saturday matinee." This sequence, though, "has almost nothing in common with the pensive, sprawling supernatural narrative that follows.... Hereafter is a daunting test for the video-game crowd — and, for more patient viewers, a film of mixed rewards and challenges."

Written by Peter Morgan, "best known for Frost/Nixon and The Queen, Hereafter invites one to entertain the notions that there might be some form of consciousness after death and that communication across the divide could be possible," blogs Todd McCarthy. "Granted, this is a hope as ancient as time and perhaps something that, the older one becomes, one would like to believe in. But the quality that is most becoming about the film is what I would call its healthy agnosticism. Eastwood and Morgan are not pushing an agenda of belief here, but neither are they out to debunk or scoff; nor, to their possible commercial detriment, are they intent upon tantalizing or spooking the audience n the manner of The Sixth Sense. Instead, they are refreshingly open-minded on a subject it is easy to feel superior to but difficult to rule out with absolute certainty."

Profiling Eastwood for the Los Angeles Times, Geoff Boucher sets up the story for us, or rather the three "stories of battered souls searching for answers about the afterlife — there's a reluctant Bay Area psychic (Matt Damon), a London youngster (Frankie McLaren) grieving the death of his twin brother and a French journalist (Belgium-born actress Cécile de France) who was caught up in a tsunami, killed by the raging water and then revived after a strange, spectral experience." It's "rooted in recent history with key moments that play out against a backdrop of that South Pacific tsunami and terrorist bombings on the London underground. Eastwood, though, said the core of the story is the enduring mystery around the simplest of questions: 'What's next?' It's a movie that, because of Eastwood's age, will be read by many as an artistic statement about his turning toward his own mortality. He pondered that notion for a moment but found any insight elusive. 'I'd like to think I would have made this movie when I was 30 or 40 too, because it's a good story. I don't know.'"

"The question that propels Hereafter is how these three yarns will eventually converge (the answer: creakily)," writes Justin Chang in Variety, "and on the face of it, this fractured, globe-trotting tale of fate and mortality bears a strong resemblance to the work of scribe Guillermo Arriaga, specifically Babel. But while the film trades in too many coincidences... the mitigating charm of Eastwood's approach is how subdued, unportentous and laid-back it is. He seems in no hurry to establish the missing links, trusting us to engage with the characters before we know exactly how they fit together."

"It's in the London segment — that for huge parts could have been lifted out of a Ken Loach picture — where Eastwood is most uncomfortable," finds the Independent's Kaleem Aftab. "Although he makes a better fist of representing London than Woody Allen did, the director falls into cliché.... Happily, Eastwood doesn't try to take pity on the working class."

"Unlike other recent terrible Clintflix, this one doesn't announce its idiocy right from the jump — only in retrospect does the full force of its pointlessness hit you like that opening tsunami." Mike D'Angelo's assessment: "Ambitious, well-intentioned, useless."

For Roger Ebert, though, this is a film "made with the reserve, the reluctance to take obvious emotional shortcuts, that is a hallmark of Eastwood as a filmmaker. This is the film of a man at peace. He has nothing to prove except his care for the story."

Hereafter closes the New York Film Festival on October 10 and opens in theaters on October 22.

Updates, 9/15: "I should note that I'm hardly one of the director's detractors, having liked no fewer than six Eastwood films in the last decade." Ben Kenigsberg for Time Out Chicago: "I even stuck by the much-maligned Changeling, putting it on my best list.... But Peter Morgan's script is surprisingly hokey and underdeveloped, and Eastwood's solemn treatment only makes the various interconnections seem creakier."

Similarly, Joshua Rothkopf in Time Out New York: "There are few things out of Hollywood I've thrilled to more than the robust filmmaking career of Eastwood. But boy, has Squint stumbled here."