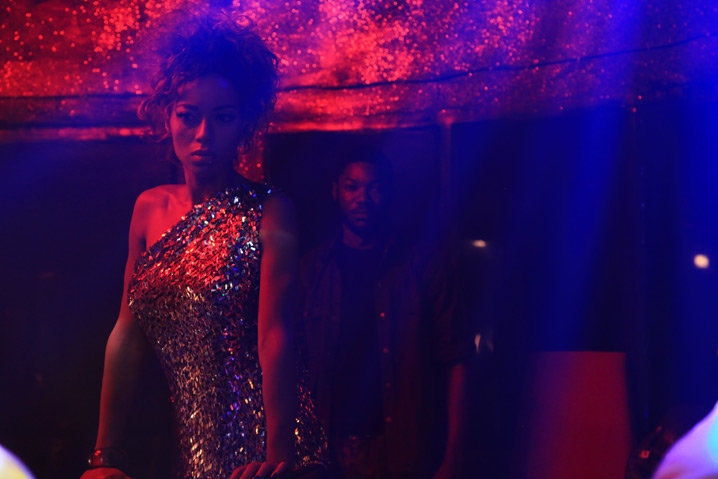 “Oh my god, this is a Tony Scott film,” said a friend, during one of the many times we leaned towards one another over the empty seat between us during this, our first screening.  The hushed conferences continued as if we needed mutual verification not just of the gratuitous torturing violence and sweaty, ass-oriented sex scenes we were watching, but above all for the expertly excited genre work continually, expressively surprising us.  If it weren’t for a psychologically blank, feckless-slick playboy in the lead, the film may be perfect, an efficient and fluidly caricatured crime story where money is the focus of all desire and movement, be it of plot or cinema.  Starting with a glorious opening montage dissolving between wads of cash, a central city square energized by a population hungry for scarce automobile gas, and shots of people siphoning the precious fluid, Viva Riva! careens from there through a multitude of tonally varied but coherently staged scenes of our petrol-bandit hero’s brief, vibrant life running from his Angolan ex-boss (who walks like a glowering zombie Jacques Tati) and trying to court a local mobster’s gorgeous moll (image above).  Lewd and by turns snappily told in crime story short hand—sometimes coming up short on character details, to the film’s loss of texture and general social atmosphere—and taking its unpretentious, agile movement from scene to scene to extremes—lesbian military commanders, Angolan racism, fellatio behind bars, terrific supporting actors as priests, hookers, madams, endless exchanges of money, goods, and sex—the film has the color and the grime fit for the dozen films it has stolen from, conceits observed, stripped, and integrated.  It’s doubtful there’ll be a more fun film at the festival.

It was impossible to pass by a film with such a title, though it unfortunately refers not to a possessed instrument but, slightly less amusingly, to a marimba heavy metal band formed when a lonesome out-of-work marimba player proposes the idea to a long haired dead head  / OGBYN impersonator / hard metal drummer. This combination of quirky working class pathos and deadpan weird characterizes this uneven but pleasant film.  Hernández Cordón takes a documentary starting point—Don Alfonso’s real life experience being extorted for money so that he must hide his family and protect his sole livelihood, his marimba—and fictionalizes the band’s formation, rehearsals, drama, and nonchalant downfall in long takes with a straight-faced humor.  Each shot seems to likewise start from a documentary impetus, only to them visually abstract backgrounds and the setting to sufficiently undercut the actuality of the shots.  The result of this  awkward experimental is a hit-and-miss tableaux approach that is often amusing—as how could rehearsals of a metal band with marimbas not be?—and occasionally moving, especially when Hernández Cordón lets his actors pull out what sound like real stories to relate to the camera.  Yet these often seem like calculated emotional injections the fictionalized drama fails to fully and believably absorb, instead using the momentary sadnesses of the people to exploit a human depth missing from this slight and friendly mixture of drollness, real life melancholy, art-house minimalism and third-world doc interest.

0103 Legend of the Fist: The Return of Chen Zhen (Andrew Lau, Hong Kong)

My quest to continue the genre high of Viva Riva! ran into an immediate brick wall with this new gleaming thing by Andrew “Psst The Departed is actually better than Infernal Affairs” Lau, a picture upon whom any word of description requires necessary qualifying ironic quotation marks.  It is an “homage” to the 1972 Bruce Lee film Fist of Fury, but exhibits a textbook example (unfortunately at the length of a full feature film) of the postmodern pastiche, where genre and homage showcase hollow reminders of things we recognize from movies we actually like, here evacuated of all meaning and content.  Donnie Yen, sleek, tanned, hairless, and tight-skinned, as the titular lead, has nothing to do until the few action sequences show up, which then proceed at such a pace, and with the pulsing choral (?!) music pre-judging what we are watching as epic and badass, it’s like the movie so completely wants to convince us of Yen/Chen/Lee’s skill that it gets the action over as quickly as possible.  Which leaves us with cavernous, over-bright sets, Anthony Wong puttering about benignly, and Shu Qi’s “character” “acting” drunk through the entire production.  Only a radio announcement reciting the names on a Japanese death list and later battle casualties cast an emotional shudder across the film’s vague, deflecting quality of translucent ghostliness, so much on screen with so little actual content.  It’s phantom cinema, haunted by the past—cinema and history—and you can pass your hand right through it.