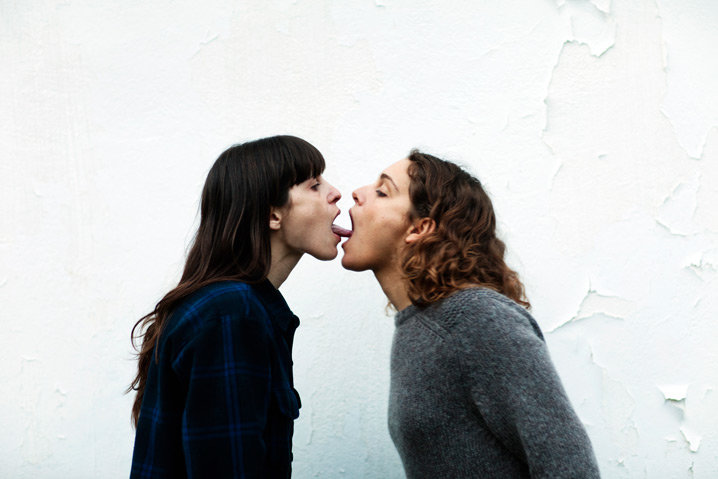 My final TIFF film reveals itself to be one of the finest, Tsangari’s second feature and one working some kind of cinematic alchemy to meld the incompatible elements of a compassionate father-daughter relationship, a transposition of teenage female friendships and sexuality to a woman in her early twenties, dealing with a single parent’s death, and an oblique pictorial-philosophical picture of an unusual industrial Greek town.  The results, as with all alchemy, are unstable—resolving a simultaneous narrative of terminal illness and “blossoming” sexuality can only result either in sentimentality or, as here, a tepid, near inert half-finish.  But before the finale the film is rife with this burbling chemistry, most ingeniously a picture of a very young girl’s sheltered life as that of an equally naïve, fearful, and curious 20 year old, a contrivance factually explained by Marina (Ariane Labed) having been raised only be her ill father (Vangelis Mourikis, a metronome for perfect cinematic tone) but humanly explained by the equitable, warm, frank and frankly eccentric relationship the father and daughter have to one another, in lieu, as the father says, of his having “buddies.”  Marina likewise, since she has only one girlfriend, the more sexually adventurous Bella, who teaches her how to kiss; the pair enjoy such girlish-duo outings as learning Françoise Hardy songs in French and a variety of peculiar skipping techniques.  Between her father and her girlfriend, Marina lives the life of a young girl, but the film moves her life down the road to a body ten years older, clearly with some erratic idiosyncrasies left in the process.  The weird modernist-industrial town the film is set in clearly informs this idiosyncratic underdevelopment; and I wish there was more in Attenberg about the location other than oblique references and vaguely Red Desert-like images of a factory, but perhaps that would burden the sex-death movement of the story with too much analogy and allegory.  I wish too that the man with whom Marina learns to get over her fear of saying “cock” were more of a character, but then again I suppose it’s only fair after a hundred years of a cinema of anonymous women helping men along their life paths that we excuse such superficiality.  At any rate—this very human jumble, bouncing from the genuine relationship of the lone family unit to the abstract “girlishness” of Bella and Marina, and finding between it something of a place and certainly something of these characters, so well cast and acted, makes for a final vision that I am happy to end this festival on.