The sleazy insomniac world of ambulance chasers, late night traffic accidents, exhausted extortionists and even more exhausted paramedics get an almost normative treatment by Pableo Trapero, who films the setting with old school genre steady handedness.  Like a classical-era Walsh or Wellman, Carancho has the solidity of construction and reliance on conventional character types and story arcs to effectively normalize a highly specific and localized setting.  The result, like an early 30s Hollywood entry, is a workman film, one made by a director prodigious enough to pick such a unglamorous setting and proceed to cast it in a reliably realistic and unappealing light—‘cause that’s the way it really is.  It's a subtle but not particularly rich combination of the every day—the villains are sleazy bald bureaucrats—and the generic—our romantic couple is made up of a murderer (the chaser) and an addict (the nurse he meets at the scene of an accident). Thriving in the genre context, Martina Gusman as the nurse gets a wholly formed character under Trapero’s direction, while Ricardo Darin is left with a hodgepodge creation that confuses his obstinate moral insistence (“just gotta stop being an ambulance chaser!”) with hypocritical behavior ("...but first I’m gonna break this guy’s leg to fake an accident!”).  The film is so solid that any room for ambiguity is left out of the digital masonry of the mise-en-scène, which builds a clear schema where, simply, any one involved in the nocturnal world of deaths and near-deaths, accidents and “incidents” is implicated in the gloom, no questions asked.  Thus the modest ambitions of a genre film stay within its modest limits, rather than escaping into the unease of the shadows, blossoming within gray shades of morality, or aesthetically expanded in risky angles, lighting, and other stylistics.  (Though it should be noted Trapero does sometimes experiment with his digital camera using the agile video format to capture entire events in long takes.)  Trapped in the video-smoothed moral squalor, the film has the inevitability of a noir—a genre touchstone its starkly action-filled conclusion reinforces—but none of that genre’s uncertainly.  What is certain is the ugly locality of the film, not quite immersed in the society or humanity of its setting but at the very least realistically curtailed, if not ensnared, by the honestly exaggerated fatal bleakness of Buenos Aires’ menacing night-world. 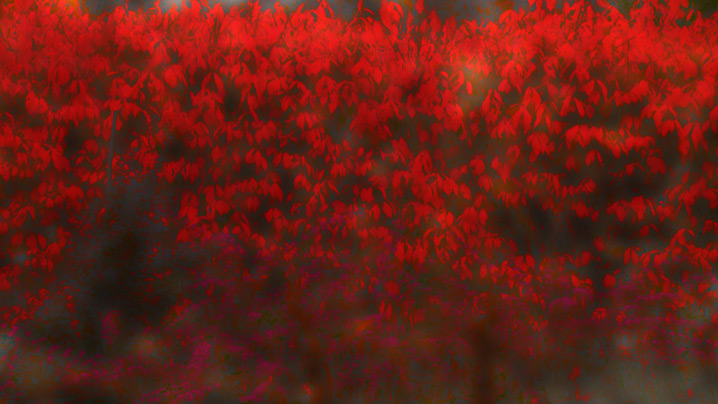 After two walkouts prompted not by awfulness but simply by mediocrity—Toronto can be a festival one has to swim through, especially when trekking off the beaten path—Wavelengths came to the rescue again.  Its second program, which was predominately made up of studies of color, began as strongly as its first, with Vincent Grenier’s digital masterpiece Burning Bush (Canada/USA).  His video camera is trained on the titular plant, aflame in red, and shot with varying focal lengths, in macro and long shots, fast motion, and deep dissolves, all of which serve to remove the factuality, materiality and actuality of the bush being captured by video and instead push the recording forward towards pure, flat colors. It seems, perhaps, the ultimate digital film.  A vibrant slap to the notion of digital color correction that serves to tweak and render consistent the look of movies shot on film, Burning Bush is true color correction, seeing the flat mosaic created by video as nothing but gorgeous, completely fluid values of color and hue melting into and out of one another.

While other films in the program likewise looked at color at its expressive and emotive value, two of the best films in the group seemed a world apart, struck by the light in stark black and white.  Christopher Becks’ Ouverture (France/Canada) finds the cracks of light in the inside of a barn, using camera movement and precise evocation of negative and positive composition to define how the light carves out the values of the pictorial space in the frame. Even more abstract and in a far grubbier but more intriguing texture of black and white was Philipp Fleischmann’s Cinematographie (Austria), a primitive tracking shot of a murky forest turned sideways.  The motion scrolls down the screen rather than across it, and seems looped or layered in a way that suggests a curvature not just of the film strip itself but also of the space inside the film, the vague photographed subjects (lines of trees and groups of people in the woods) almost seemed laid on top of one another opaquely, in a ghostly way.  In the shuddering false tracking shot we get a sense of three-dimensional space somewhat akin to stereoscopic photography.  It is an eerie artifact of a film, dug up from a dirt vault of cinema history that could have been.

Fleischmann and Greinier’s works are so energetically inquisitive about their mediums (video and film) it is hard not to get caught up in what seems, suddenly, like the wondrous possibilities of an art elsewhere at the festival rendered innocuous, found inert, picked by default, and naively (or ignorantly) unquestioned by both filmmakers and perhaps audiences. Becks’ film may not have such a thrilling, exploratory aspect to it, but its stately, clear-eyed study of sharp lines and monochromatic delineations showcase and express a control, respect, and intent, beautiful pursuit of a subject.  After Monday, when the Wavelengths program concludes and the festival loudly marches on (as a side note: Wavelengths seems the only theatrical showings in the festival that are not preceeded by a half dozen pre-rolls of “cute” and “film loving” ads by sponsors), let’s hope these films will serve as a vanguard for adventurous cinema here in Toronto for the rest of the week, and in the world for the rest of the year.