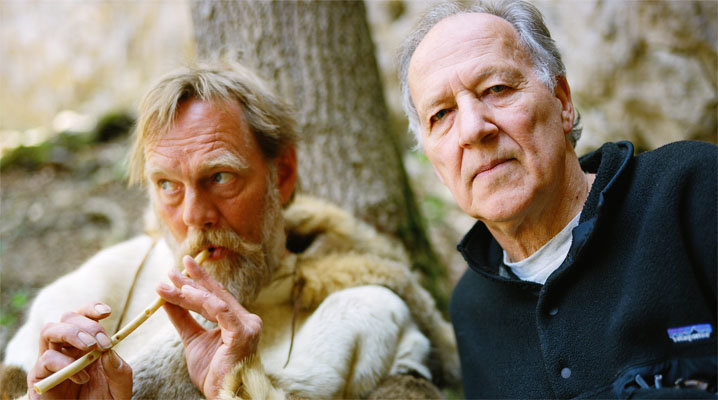 "Cave of Forgotten Dreams looks at the marvels inside the Chauvet caves of Southern France, a setting nature preserved so perfectly that cave paintings from nearly 30,000 years ago have suffered little-to-no deteriorating effects," writes the AV Club's Scott Tobias. "Back in June 2008, Judith Thurman wrote a piece about it in the New Yorker, but she never actually saw the cave in person, due to restrictions that have limited all but a handful of scientists, archaeologists, and other researchers. But Herzog being Herzog, he gained a rare permit to bring his cameras into the Chauvet cave — four hours per day for one week — to document these extraordinary drawings from the Paleolithic era."

"The 3D is actually fairly subtle in Cave of Forgotten Dreams," blogs Josef Braun, "and I wonder if the movie wouldn't be just as stunning without it, but it's nevertheless the finest use of the technology I've seen, partly because the depth of field is already fairly limited once we're moving through the narrow cavities. Though in many ways it picks up from where Encounters at the End of the World left off, using images of landscapes most of us never see as a way to contemplate time on an overwhelmingly vast scale, the movie feels somewhat closer to straight documentary for Herzog, perhaps because of his humbling reverence for what it is he's been able to see and capture."

"Even an unfortunate projector breakdown in the film's last few minutes couldn't erase the impression that the story couldn't have been told in any other way," reports Michael Cieply for the New York Times. "At a dinner before the screening, Mr Herzog explained, in his complicated way, that he decided to work in 3D as a way of focusing people on important images, in a time when focus is not the strong suit of the human race. His own obsession with cave paintings, he said, was rooted in a childhood spent partly in the Bavarian mountains. As a child, recalled Mr Herzog, he became obsessed with a book about prehistory, and saved for six months to buy it. 'I thought it was the only one,' he said."

Herzog tells this story to the Los Angeles Times' Patrick Goldstein, too, who relates a slightly longer version of it in a much longer piece. There's a bit of dramatic tension in this one, as it was written just days before the world premiere — and the film was still nowhere near ready. But of course, as Scott Tobias puts it, Herzog being Herzog... they made it. Goldstein explains how and Herzog tells him why: "I've never used the process in the 58 films I made before and I have no plans to do it ever again, but it was important to capture the intentions of the painters. Once you saw the crazy niches and bulges and rock pendants in the walls, it was obvious it had to be in 3D."

"It's an extraordinary production feat that transcends his personal whims while giving them room to shine," writes indieWIRE's Eric Kohn.

Since Herzog and Errol Morris, who've known each other for a few decades now, were both in town with films (Morris's, of course, is Tabloid; here's that roundup), they held an onstage conversation and Q&A, which Roger Ebert has caught on video and posted in full.

About two weeks ago, Bilge Ebiri spoke with Herzog for IFC.com about Cave and all the other pans he's got on the flame.

Updates, 9/15: "As a documentarian, Herzog is never content to simply document," writes Roger Ebert. "There's always a transformative element. Cave of Forgotten Dreams ends with a 'Postscript,' in which he notes that not very far away France has built its largest nuclear power plant. The water heated by its cooling towers is directed into a huge tropical arboretum, where trees and ferns flourish. Crocodiles were introduced here, 'and man, do they like it.' Some of them have mutated into albinos. Herzog, in his inimitable accent, pronounces the words lovingly: Mutant radioactive albino crocodiles."

"Herzog seems visibly excited by what he's showing us," writes Variety's Justin Chang, "and his rhapsodic narration teems with ideas concerning not only the paintings' artistic significance, but also the nature of time — the way it preserves yet dwarfs most human achievements, the tendency of creations to outlive their creators, and the impossibility of reconstructing the past from artifacts alone. There are moments when the helmer's enthusiasm, though always welcome, seems at odds with the mood of transcendent wonder he's trying to conjure. Fortunately, he eventually quiets down long enough to let the viewer behold the paintings in something resembling silence, while Ernst Reijseger's music — a gorgeous meld of string-based orchestrations and choral harmonies — strikes the appropriate mood of awe."

Salon's Andrew O'Hehir notes that Herzog's "producer, Erik Nelson — who is a friend and an occasional Salon contributor — says that Herzog is the first director of the new 3D wave to use the technology for good, not for evil. Secondly, yes, the art is beautiful, even stunningly accomplished, and these images are breathtaking — unlike anything you've seen before or will see again. And thirdly, yes, Cave of Forgotten Dreams will become a classic drug movie almost immediately, although the experience is mind-altering enough without any augmentation."

Herzog's "lyrical yet blunt judgments are entertainments in themselves," blogs the Boston Globe's Wesley Morris. "The 3D is a dubious conceit in one sense. It rarely seems essential to watching, for example, a man sniff around a forest for possible cave openings. But there is something valuably ironic about all this modern technology feasted upon an ancient little sculpture made from an ivory tusk."

For Screen's Allan Hunter, 3D "is the film's greatest asset... Crystals sparkle and it feels like being back among the fireflies on Pandora in Avatar as you truly feel you could reach out and touch the stalactites or brush your hand across a painting." So there you have it. The paintings in the Chauvet Cave rival even the fireflies of Pandora.

Updates, 9/16: "Only Werner Herzog would have thought of applying 3D technology to ancient rock walls, and, furthermore, made them more beguiling than all the galaxy's giant blue felines," writes Fernando F Croce at the House Next Door.

"If you've been waiting for a truly creative, for a truly auteur use of 3D, here it is," writes Daniel Kasman here in The Daily Notebook.

"Cave of Forgotten Dreams captivated me, and though Herzog's use of 3D technology sometimes threatens to cause a shaky-cam headache, when he and his crew are shooting in the caves, showing us these astonishing ancient works of art, the effect is dazzling," writes Stephanie Zacharek in Movieline. "Herzog's running patter is alternately a form of wry stand-up comedy and a heartfelt commentary on how these drawings, made ages ago, connect us with a long and winding thread of humanity. He points out how a rhino is drawn with sketched-out multiple legs, to give the
'illusion of movement, like frames in an animated film.'"

"Even using the finest cameras in the world, 3D has proven itself to be an inconsistent film companion at best," writes Scott Weinberg at Cinematical, "but given the cameras that Herzog's crew are using... it just doesn't work. When the camera holds still and simply focuses on one of the concave walls on which are emblazoned massive horses, the 3D gives us a little extra depth and detail — but when the camera starts moving the 3D becomes a consistent annoyance."

Meantime, on NPR, "for the latest in Morning Edition's series of conversations seeking DVD recommendations from Hollywood insiders, [Herzog] shares some of the movies from his syllabus."

Updates, 9/17: For Vanity Fair, Michael Hogan looks into those mutant radioactive albino crocodiles and comes across "some links which suggested that the reptiles in question are in fact albino alligators whose whiteness has nothing whatsoever to do with radiation.... There was only one thing to do: ask Herzog himself for a comment. The reply I received from his publicist was suitably circumspect: 'Werner has oft said about his films, there is the "ecstatic truth" and the "accountant's truth." Hope this helps.'"

"To call this movie fascinating is akin to calling the Grand Canyon large," writes the Hollywood Reporter's Kirk Honeycutt.

Update, 9/24: "What do the first art works and recent speculations about early man tell us about today?" asks Tom Morton in frieze.