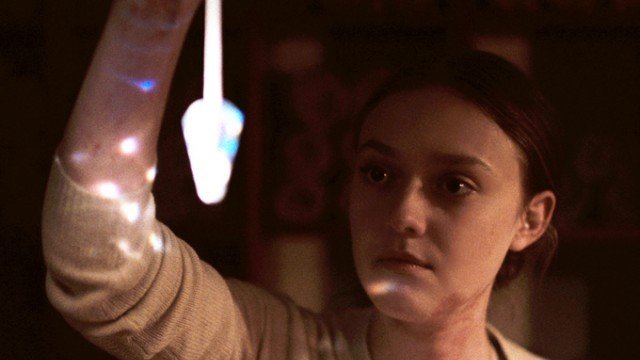 Frederick Wiseman’s Film Festival—now that would be something perfect for capturing the TIFF experience, with its swarms of filmmakers and volunteers and reviewers, its exhilaration and exhaustion. Then again, that festival might also be the granola screening room seen early on in Kelly Reichardt’s Night Moves, where perfunctory applause for a cinematic eco-pamphlet is followed by an awkward Q&A session straight out of Wiseman’s High School.

The scene smartly situates its protagonists, young activists played by Jesse Eisenberg and Dakota Fanning, as alienated not just from mainstream society but also from potential alternatives—on the fringe of the fringes, a familiar position for Reichardt’s characters. Their more radical form of protest (the bombing of a Portland dam) is revealed languidly, shard by shard, in a series of concise interactions stressing process (how to buy 500 pounds of ammonium nitrate fertilizer without the proper documentation?) and moody compositions (the characters sail toward the reservoir while in the foreground children play with plastic pistols next to a tree stump). Like her anti-Western Meek’s Cutoff, the anti-thriller Night Moves chronicles the unraveling of a group initiative, a blood-chillingly lucid eye cast on doomed outsider ventures. Reichardt can do classical suspense whenever she wants to: a passage involving a ticking bomb, a canoe and car headlights in the night evokes Hitchcockian montage, clinched later by an unmistakably Hitchcockian shot, a close-up of muddy boots during a police search. What truly fascinate Reichardt﻿, however, are less the mechanics of genre than the mechanics of conscience, a narrative of hard guilt and paranoia leading, in the final shot, into an alien world. The film’s pitiless pessimism may clarify its appropriation of the title of one of the quintessential neo-noirs of 70s American cinema, even if it comes at the cost of the spaciousness of the filmmaker’s earlier work.

One of the nifty things about film-hopping at festivals is the welter of unexpected connections that might otherwise go unnoticed. Where else could the weary traveler follow the measured dourness of Night Moves with the giddy gore of The Green Inferno, and find a not dissimilar take on neoliberal idealism? With Eli Roth doing a homage to the Italian horror subgenre of cannibal carnage, the clear joke is that the bleeding hearts here really are bleeding hearts. The cause is Amazon deforestation, viewed from the vantage point of a wealthy American college student (Lorenza Izzo) and taken up mainly as a way to get closer to the hunky campus Che Guevara (Ariel Levy). When their plane crashes in the Peruvian jungle after their environmental demonstration, the activists quickly find themselves in a wooden cage watching helplessly as their colleagues are turned into barbecue for a tribe of headhunters. Skewering privileged-gringo posturing while anointing his characters with viscera, Roth is a blunt prankster: he’ll lace a corpse with drugs just to see the stoned natives bloodily get the munchies, and then sardonically make the machine-gunning of corporate goons sound a lot like cavalry bugles. Fully aware that grindhouse classics like Cannibal Holocaust or Cannibal Ferox functioned as acts of cinematic violation, The Green Inferno is often productively loathsome.

From cannibals to black-gloved stalkers, another ode to Italian frissons. The Strange Colour of Your Body’s Tears is the kind of captivatingly evocative, often borderline Ovidian and utterly meaningless title that would grace the 70s shockers of Argento, Fulci, Lenzi, Martino or Ercoli, and the volatile terrain mined by Hélène Cattet and Bruno Forzani in their earlier giallo pastiche, Amer. To heighten something as already heightened as the giallo thriller is to court incoherence, and the film is at times close to non-narrative: a third of it consists of close-ups of inflamed eyeballs, practically every camera angle disorients, entire wordless sequences go by in cubist, smudged slow-mo. Greenish filters are splashed crimson. Moans and rasps emanating from shadows, the electric ululating of old Morricone-Ortolani-Nicolai scores, the sounds of flesh ripped open. Where Amer could at times feel like an academic excavation of subterranean genre subtexts, The Strange Color of Your Body’s Tears is bent on replicating (and outdoing) the sheer sensory delirium of those films, to the point of madly repeating and reshuffling its own psychedelic imagery. The results unspool, fascinatingly, as a deluge of anchorless footage from some not quite finished horror opus, piercing the viewer’s psyche by sheer agglutination. The perfect experience, then, for anybody who’s ever wanted to experience the madness of Toby Jones’ character in Berberian Sound Studio.

I was curious to see Atilla Marcel as Sylvain Chomet’s first live-action feature, following The Triplets of Belleville and The Illusionist. The gauzy gentleness and antiquarian’s fondness for bric-a-brac evident in those animated films survive the transition in mediums, and I was happy to see the late Bernadette Lafont one last, mischievous time. Otherwise, the candy-colored, timidly Oedipal story of a hangdog mute (Guillaume Gouix) and his search for childhood memories illuminated by earthy kook Madame Proust (Anne Le Ny) is far closer to the manic whimsy of Jean-Pierre Jeunet than to Chomet idol Jacques Tati. Which reminds me, Danny, that we still have Hayao Miyazaki’s film ahead. Do we dare imagine what a live-action Miyazaki would be like, or do we just give thanks for and savor these exquisite apparitions that only seem possible in the realm of animation?