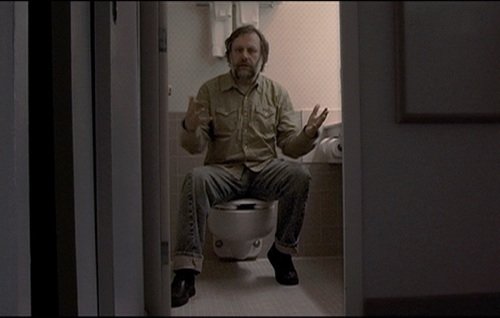 The Perils of Specificity, and Vice Versa; or, how to get your own Two-Minute Hate session at Big Hollywood: Our discourse these days is such that having a morally correct position isn't nearly enough; one must hold a morally correct position for the correct reason. This notion, of course, is the basis for much consideration in Western philosophy, and has been for centuries. But when it falls into the hands of people who write in a more casual mode, who have an axe to grind, and who are opposing "thinkers" even more simplistic than they, it can lead to trouble.

Vadim Rizov is a friendly acquaintance, a nice fellow and a promising film writer who blogs at IFC's Independent Eye and is, I suppose, obliged to produce a certain amount of material on a daily basis. Back in the waning days of May, he put up a post entitled "The disingenuousness of Jafar Panahi's right-wing advocates." His essential point being that the right-wing proselytizers for the release of Jafar Panahi don't care a whit about the man's actual work, but have only rallied to his cause in order to make him "a symbol." And that right-wing support for Panahi is hypocritical given that right-wingers are, by and large, completely in favor of a U.S. policy that "regularly refuse[s] entry" of Iran's "best and brightest" because of Homeland Security's inability to "tell one Iranian from another." (There's actually no inherent contradiction in a point of view that believes that Panahi shouldn't be in a prison in Iran, and also that Iranian citizens attempting to enter the United States ought to be subjected to over-thorough scrutiny. I don't believe in the latter idea, but there really isn't an effective contradiction between the two.)

Two things about certain conservatives who want to participate in the culture war: they'll grab any opportunity to paint themselves as victims, and they're a little slow on the uptake. A riposte to Rizov's post appeared at the conservative site Big Hollywood on June 1, an eternity in blog years. As is usual, this response is almost twice as long as Rizov's original, and while engaging the specifics of Rizov's argument, chides Rizov for not citing any specific examples of those who "could care less about [Panahi] as a director or a representative of the larger film culture." The meat thus thrown, Rizov is tossed around in the BH comments section, and referred to as a "she" by at least one of the brainiacs over there. In the meantime, at Rizov's post, frequent BH contributor John Simpson pitches an elaborate hissy fit about how he's done more heavy lifting on the Panahi issue than mainstream Hollywood and that it really doesn't matter whether anyone supporting Panahi has seen any of his films, although he (Simpson) has, rah rah, bully for him...

And you know what? Although he's a bit of an insufferable blowhard, Simpson's right. He did jump on the Panahi issue well before mainstream Hollywood did, and one need not be conversant with Panahi or his work in order to support his release, any more than one has to like Pirates in order to sign a Polanski petition. As I myself chimed in on Rizov's post, it's absolutely true that in this case, the right is treating Panahi as an object rather than a subject. And while that's irksome, it's not so significant that it's worth laying out a tortured argument that the right's support of Panahi is another example of How They Are Bad. A wry comment, maybe. But not a whole mini-essay. Still, the content maw must be fed, and futile, spurious arguments must be played out; and each side must assure itself that its self-righteousness is better than their self-righteousness. And none of us are in jail, whoopee!

Moving right along, a whole encyclopedia on muddled thinking can be written around the word "they" in the deliberately provocative headline of Matt Zoller Seitz's IFC piece on Sex and the City 2: "Ladies and Gentleman, THIS is why they hate us?" Who is this unspecified, objectified "they" of which you speak. And no, the answer "Oh, you know!" is not sufficient—I really do wanna know. [UPDATE: It has been brought to my attention that my citation of this headline could be construed as an overall critique/dismissal of Seitz's entire piece, which, to give credit where due, is more detailed and nuanced than its headline. Seitz's piece is well worth reading in its entirety, and it should be understood here that my main argument is with the headline and the particular tendency it's symptomatic of.] Are "they" Palestineans? Afghans? Iranis? Do you mean the Arabic world? The Muslim world? Iranians aren't Arabic, after all. And so on. Thing is, in this case, when specifics actually are cited, the argument becomes more ridiculous. A film writer whom my editor has designated as a He Who Shall Not Be Named has frequently used the phrase "Taliban recruitment video" to tag pretty much all Sex and the City-related audio-video works; and one really has to wonder, does this guy even know what the Taliban is? Does he have any idea of United States involvement in various Middle East regions well predating even the birth of Candice Bushnell that contributed to a certain, erm, anti-American, anti-West sentiment among certain inhabitants of those regions? As I've averred elsewhere, to say that this shadowy "they" hates the West for its licentiousness and materialism is in a sense as self-congratulatory as George W. Bush's "they hate our freedoms" pronouncement. Oh yes, beat your breast about our permissive, spiritually arid culture, but don't do a real thing to change it; if you did, you'd a) fail and b) not have anything to frigging blog about.

This is not to say that in certain circles of Islamic extremism a picture like Sex and the City 2 won't be deplored as an example of Western decadence and cultural imperialism. But to treat it as a...whaddyacallit?...root cause is really more than a little much. And let's face it: to merely invoke the "this is why they hate us" meme is, finally, to buy into the false consciousness that has justified what is an utterly bogus "war on terror." There. I said it and I'm glad.

As a great lady might have put it, how about a little Zizek, Scarecrow?

"...in the new global order, we no longer have wars in the old sense of a regulated conflict between sovereign states in which certain rules apply (humane treatment of prisoners, prohibition of certain weapons, etc.). What remains are 'ethnic-religious conflicts' which violate the rules of universal human rights, do not count as wars proper, and call for the 'humanitarian' intervention of the Western powers—even more so in the case of direct attacks on the U.S. or other representatives of the new global order, where, again, we do not have wars proper but merely 'unlawful combatants' criminally resisting the forces of universal order. Here, one cannot even imagine a neutral humanitarian organization like the Red Cross mediating between the warring parties, organizing an exchange of prisoners, and so on; one side in the conflict (the U.S.-dominated global force) already assumes the role of the Red Cross—it does not perceive itself as one of the warring sides, but as a mediating agent of peace and global order crushing particular rebellions and, simultaneously, providing humanitarian aid to 'local populations.'"