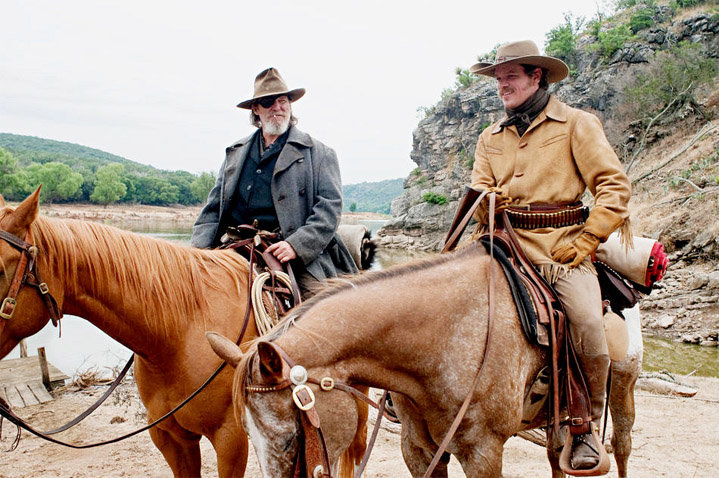 True Grit: four keenly-realized characters suspended in a moral vacuum. The realization of the characters is a question of the actors' inventiveness and a certain interaction of editing and screenwriting; the moral vacuum belongs to the directors, who are also, incidentally, the screenwriters and editors. The Coens have a pervasive disingenuousness which is usually construed by their supporters as playful and by their detractors as symptomatic of a lack of backbone; their films are full of false attributions, red herrings and parodies presented as facts, and the directors either take the neuroses and motivations of their characters (especially leads) with a grain of salt or are drawn to characters that inspire incredulity or even contempt (George Clooney in O Brother, Where Art Thou?, Billy Bob Thornton in The Man Who Wasn't There, John Malkovich in Burn After Reading, Tom Hanks in The Ladykillers, etc., etc.).

Taken together, these tendencies can make for good comedy but suspect drama; the "Based on a True Story" credit in Fargo is a bleak and funny gag, but the bible verse at the beginning of True Grit seems like the first in a series of elements that could only be called "moral bric-a-brac"—acknowledgements of morality within the space of a film that doesn't really admit any concern for moral issues and which takes its ugliness at face value. Jeff Bridges, booting Indian kids off a porch, is every bit as spiteful as Eastwood in Gran Torino, yet there's nothing in True Grit to balance or counteract his spite; this is either a moral flaw or the entire agenda (it'd be a stretch to call it a "point") of the film.

Daniel Kasman summed up the Coens' A Serious Man (and Haneke's like-minded The White Ribbon) like this here last year: "a cinema of such precise predetermination that the movies are in essence over before you even sit down to watch them." This applies to True Grit as well, but, as in the Coens' better films, the predetermination is less a question of subjecting the characters to a gauntlet and more an outgrowth of the characters themselves. Throw Jeff Bridges' borderline-incomprehensible drunk, Hailee Steinfeld's determined girl, Matt Damon's flamboyant Texan and Josh Brolin's Neanderthal bandit into any scenario, and you'd probably end up with the same outcome, because their characters, however well-defined, are unbendable. This, essentially, is what makes True Grit an anti-classical Western (however "old-fashioned" it may try to present itself as being), because the classical Westerns, even Budd Boetticher's leanest, built their dynamics around a pliability of character; rules and motivations were bent, either by the landscape or by the needs of the community / group. The characters of True Grit, on the other hand, travel towards each other in straight lines across the desolate Indian Territory; their inevitable collisions are not a question of fate or morality, but entirely based on their personas—and this, in turn, raises the question of whether the film is nihilist or existentialist.

I'm inclined to go with the former, or at least to say that the film's second-hand existentialism is yet another keen disguise.  I'm inclined to think that the Coens are apolitical not because the individual films lack politics, but because each film puts on a different kind of politics like a costume (coarse cynicism in Burn After Reading, American populism in The Hudsucker Proxy, vaguely neo-conservative dread in No Country for Old Men, etc.), and I'm also inclined to think that they're amoral filmmakers (which is not say that they're amoral people) because their morality changes from film to film, and their personal stances (whatever they may be) are largely uncoupled from their directing. That is to say: True Grit, for better or worse, is an object d'art, and at a certain point it becomes impermeable. This makes it all the more ironic (and fascinating) that the character-driven non-plot of True Grit—a small group of people whose sense of identity, purpose and the world expresses itself through "inevitable" petty actions, and ultimately through a selfless act—is essentially the story of the old (still extant) cinema. This was—and is—a cinema driven (like literature, theater, art or music) to express something other than itself. But this story is told through the devices of a "second cinema," the "post-cinema" that has emerged since the 1970s and of which the Coens are often the standouts. This is a high-minded cinema where decisions are replaced by choices, a cinema of conscious, often ironic stances, which concerns itself not with using movies to answer external questions, but with using form to support its own internal systems of character and plotting. Here, this mode of filmmaking has been purposed to follow the trajectories of four people who are its opposite. But those people are seen as alien, as if the camera doesn't quite understand them—as if their purposes, however faithfully reproduced, could never completely be understood, and though we know that Bridges carries Steinfeld of his own free will, it can't quite be explained why, except with a shrugging "that's just the sort of guy he is."