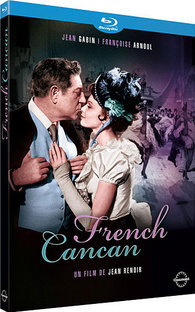 What is an auteur?

The question never goes away, does it? The director Irvin Kershner died last week, and I commemorated his passing by putting up some of my thoughts about his work up at my blog. I discussed a couple of pictures of his that I admired—The Luck of Ginger Coffey and Loving among them, mentioned the George-Lucas-produced elephant, and made an observation concerning the (to my mind) objectively pro-fascist content of RoboCop 2, which Kershner directed, and the seemingly not-fascist character and view of the man himself, which to me suggested a certain late-period disconnect between the director and his material, the sort of thing that is, or can be, interesting to note when making a career assessment or summing-up. The item solicited some comments, including one from the blogger who goes by the nom Flickhead, who had less admiration for even the ostensible high points of Kershner's career than I or other commenters did, and who concluded his assessment by saying, "If there's an auteur at work here, color me blind." Which struck me at the time as being a rather deft construction/tearing down of a straw man, as it was the first time the word "auteur" had even come up in the thread at all! Except that in describing Loving, I noted that some of its detractors "will tell you it's more Strained Seriousness than Expressive Esoterica," alluding to two categories in Andrew Sarris' book The American Cinema, which was an attempt to adapt the French politique des auteurs to a consideration of both American film and American film criticism. In so doing I at the very least invoked the idea of auteurism.

But no—I don't consider Kershner an auteur. I consider him a filmmaker who directed a few pictures of note and pertinence. I think an auteur, is something different. Had Kershner been an auteur, he might not have made RoboCop 2. Or he might have made RoboCop 2 differently. It is rather telling that when Martin Amis visited the RoboCop 2 set for a Premiere piece in 1990, Kershner was not interviewed by the author, who at the time was pretty well-established. Here is a passage from Amis' piece, in which he takes up the crew's nickname for the director, "Kersh" and concentrates on the perspective of producer Jon Davison, who may in fact have turned out to be one of the film's true auteurs: "Nobody knows exactly how much the first movie's frisson owed its director, Paul Verhoeven, and his 'neurotic elan,' in the phrase of one team member [...] 'Kersh,' says Davison with some concern, 'is of course much less violent than Paul...' Kersh is also sixty-seven; and at present he is too busy to sleep, let alone be interviewed. There is a feeling that Kersh will have to be kept an eye on. He may have a weakness for the light. Others, then (the deep talent), will have to make sure it's heavy." RoboCop 2 ended up heavy, to be sure, thanks to both Davison and its script. In any event, nothing in the film, save perhaps for a certain sardonicism that one detects in Loving and that one would have to strain one's aesthetic-appreciation/rhetorical neck to make a genuine case for here, links profitably with any Kershner characteristic one could have cited. And to make said case, one would also be obliged to watch RoboCop 2 again, which arguably no one ought to be in a hurry to do.

So, judging from the above...and, let's not forget, from the filmography entire, we can conclude that Kershner's not an auteur. So is an auteur a director who only makes really good films that have a consistent point of view? Great, that leaves us with...two. Bresson and Tarkovsky, I'd reckon. You might reckon differently. Rare is the auteur who's only ever made consistently great films, and you've got to admit this even if you personally love Donovan's Reef and, um, Hatari!. A pronouncement from unqualified auteur Luis Buñuel, who could certainly be said to have had a very up-and-down career with respect to resources and what some might term "quality control," once observed that throughout it all, "I never made a single scene that compromised my convictions or my personal morality." And that is correct: as relatively flat as something like Gran Casino is, it doesn't represent a sell-out of all or any things Buñuelian. While one might be hard-pressed to pin down the overtly Buñuelian elements in this picture (they are there, but you need to be on the lookout), there's nothing to suggest an absolute disconnect from the material the way it can be detected viz. Kershner and RoboCop 2. So is that all that's needed to be an auteur, then? To have never made a single scene that compromised one's convictions/morality? Well, maybe not quite. Something like the inverse, though; maybe that this fact about Buñuel's overall body of work makes his not-great films auteurist pictures by default? Or is it that that fact keeps his not-great films from compromising his auteur stature?

Believe it or not, when I was growing up and into cinephilia, trying, in my way, to see all the films that would help a young body grow twelve different ways, and having a hard time of it, because getting to rep cinemas in Manhattan wasn't something an unaccompanied twelve-year-old had an easy time of (unless he was some sorta delinquent, which alas I was not), I'd run into people who'd try to tell me that the color films Renoir made in the 1950s, beginning with Elena et les hommes, weren't particularly good. That they were fluffy and frivolous and determinedly not profound in the way that classics such as La règle du jeu and Grand illusion were. How did the reputation of these films mutate? Well, the ability to actually see them helped; starting with the Criterion laser discs of the likes of The Golden Coach and others, we were able to see the Renoir for whom, a) color expression was as natural to as it was for his father, a painter of some distinction, and b) the exploration of artifice was a hallmark of art and art-making itself. (I have a theory as to how this pertains to his final U.S.-produced film, The Woman on the Beach, but it'll have to wait for another time.) "I like French Cancan because it gave me another chance to work with Jean Gabin," Renoir states simply in My Life and My Films. Further to the point, Renoir says, "Broadly speaking, the film is an act of homage to our calling, by which I mean show-business." And this is important. Because in all of Renoir's cinema, even a picture as ostensibly "naturalistic" as Toni, one is never asked to believe in a way that would entail an out-and-out denial that what's happening before you is in some sense tied to show-business. At the same time what we're dealing with is not so much self-consciousness as just consciousness, and this consciousness is a part of Renoir's ethos, or aesthetic morality, or just plain morality, but I'd like to just call it sensibility. Andrew Sarris' proposition that an auteur expresses his personality on film has struck some as blustery borderline macho, which is just one reason I prefer the word "sensibility" to "personality." And what you get in each and every one of Renoir's films is not just the expression but the communication not of a personality but of an exquisite, informed, multi-layered sensibility on screen.

And this is what makes Jean Renoir an auteur. And this is what ties together Toni and French Cancan. And French Cancan really is a splendid lively entertainment that has received a really staggering restoration from Gaumont, one of the best digitizations of a Technicolor film I've seen ever, which as evidence for I offer the below photograph, taken off of my plasma display: 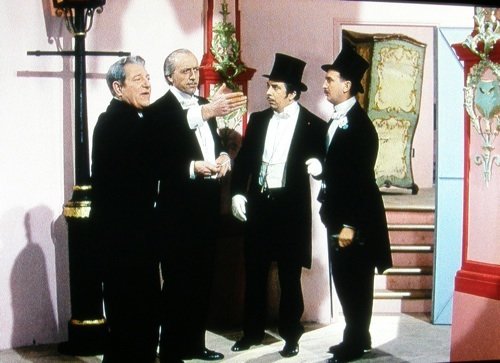 As imperfect a "capture" as this might be, it tells its story: look at the white whites of the tuxedo shirt fronts, note the respective integrities of the pink walls and the red moldings. Things such as these can be notorious trouble areas when performing cinematic alchemy, and as you can infer what we have here is pretty close to perfect. The DVD Beaver notice features more illustrations. The film itself has English subtitles, but the extras, which include two lengthy and informative docs, don't, so you can either learn French (which I recommend—Mick Jagger has done it, so there's no reason you can't) or wait for this transfer to come around in some more widely-Englished edition. Which might not happen for a while. For myself, I don't know how I lived without it this long.