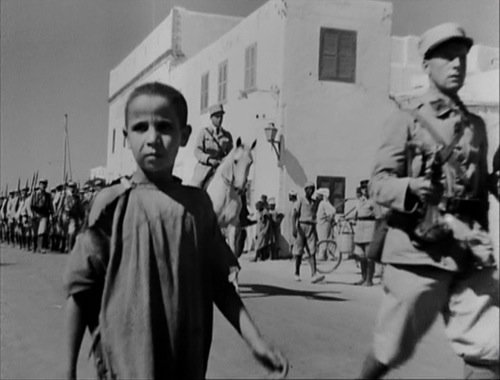 According to the notes on the back of this typically exemplary Eureka!/Masters of Cinema release, this 1934 film by Jacques Feyder, who from all appearances seems to be one of the handful of directors who did not miss a step when making the transition from silent to sound filmmaking (this was in fact the director's first "talkie," so to speak), is "an early benchmark of poetic realism." That's the sort of statement that these days is apt to get some cinephiles in a bit of a lather as to what "realism" in films is and whether "realism" or "reality" ever ought to be discussed with respect to the film image at all, and so on, but what the heck, it's just jacket copy, right? In any event, my own favorite moment of "realism" in the film occurs during one of a series of establishing shots that tell us we're in North Africa, and with the French Foreign Legion. In one shot several battalions of soldiers marches past the camera. And so, too, does a little Morroccan boy who wanders into the shot, looking at the soldiers, walks closer to the camera, actually sees the camera, and ducks out of the shot. This charming little "imperfection" can be taken in several ways. The least imaginative, of course, would be to insist on it as a gaffe.

The film's plot, or story-engine, which it takes its own good sweet time establishing, goes thusly: Pierre Martel (Pierre Richard Willm) is a high-living rotter obsessed with not doing very much besides spending very freely and living high with his lover Florence (Marie Bell). A brewing family scandal forces him to give up his life, leave the country, and take another name, in North Africa, as part of the Foreign Legion. Life therein is dreary. Not much to do but hang out at a brothel (so much for improving one's station/moral character, or enriching one's worldview), watch the girls sing dirty songs (the little number enacted by an uncredited actress in the screen capture below is an amusing contrast to a very different "entertaining the troops" bit we'll see in Kubrick's Paths of Glory, made two decades later), and get one's fortune told by the world-weary brothel co-owner played by Françoise Rosay, Feyder's real-life wife. 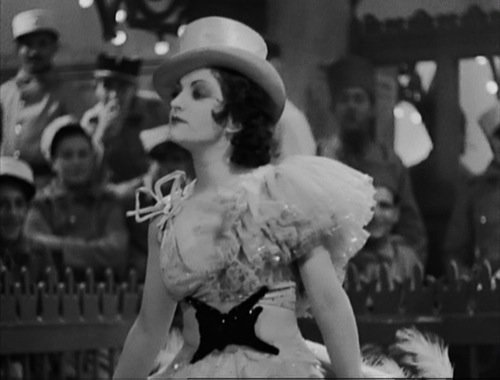 Almost an hour into all this atmosphere, Pierre meets Irma, a brunette double for his forsaken lover Florence, who, like many of the other brothel's working girls, is compelled to stay on there by debt. Pierre, besotted, stays overnight with her. After some "what the hell am I doing" regret and hesitation (happens to the best of us when visiting brothels, no?), he decides that he's going to "save" Irma, who's distinguished from Florence by not just her hair but her voice (in a daring early sound innovation, Feyder had this character dubbed by another actress). There had been, of course, doppelganger tales prior to the one told here; however, it's worth considering that this is one of the first post-surrealism cinematic stories of the double. Not that Feyder was anything approaching an overt surrealist. But when we recall that it was surrealism founder André Breton who specifically codified in prose what was essentially another old concept, that is, the idea of amour fou, we understand why this narrative gains in compulsive power. While it would certainly be something of a stretch to draw too many comparisons between this and Hitchcock's Vertigo, itself almost a quarter-century away, the one really startling thematic element the two films share—more germane, in fact than the doppelganger theme—is the notion of mad love setting the protagonist off on a fatal spiral for which he had, for all intents and purposes, always seemed "fated" in the first place. 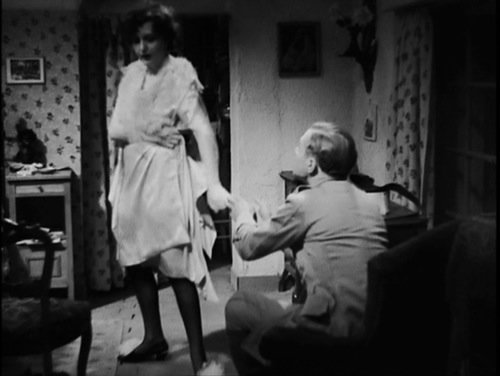 The film's title, as pointed out in a note in the booklet accompanying this release, could be translated as "the great game" and thus could be taken as referring to the old British notion pertaining to colonialism. But of course it does not. In French colloquial use, playing the great game meant...well, in American '70s slang, perhaps, "going all the way." In current football-watcher American slang, the implication could be along the lines of "go big or go home." In the context of this film, it means Pierre going head on into the destructive/erotic force that has been ever driving him. This makes the film stand out from other French North African-set romances such as Pépé le Moko, where the ostensible exoticism affected the emotional climate. As Ginette Vincendeau implies in her essay on the film in the DVD booklet, Pierre would have chased his doom from pretty much any outpost. What distinguishes Le grand jeu is the droll, unhurried, quietly tragic and poetic way it chronicles Pierre's inexorable march.

The U.K.-made disc is, as it happens, region-free, but is also in the PAL broadcast standard, which could be a challenge for a less than up-to-date domestic (U.S.) system.