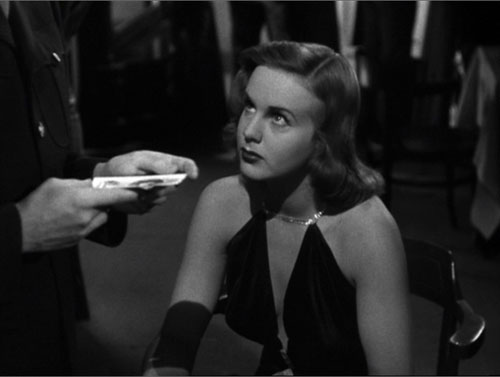 One of the most unusual putatively-hoiday-themed pictures ever made, Robert Siodmak's 1944 Christmas Holiday features beloved child/teen songstress Deanna Durbin in pretty much her first real adult role, and a doozy it is, too. Herman J. Mankiewicz—he of Citizen Kane screenwriting fame—here whittles down Somerset Maugham's novel (a tale of self discovery with the more far-flung tales of its secondary characters folded in, which begins with its hero's titular getaway to Paris, where he meets a mysterious prostitute)—into something more anecdotal and possibly personal. Dean Harens plays an army Lieutenant who, after getting a Dear John letter from his fiancee, decides to waste his Christmas leave by going to San Francisco to confront his jilter; bad weather forces the plane to land in New Orleans, where a sleazebag reporter (Richard Whorf) takes the young officer under his wing...and to a local brothel...oops, sorry Mr. Breen, we mean nightclub...where madame, oh [cough], we mean hostess Gladys George introduces the sad sack to Jackie. That would be Ms. Durbin. Who sings "Always," among other numbers. She then induces Harens to take her to midnight mass, and after that tells him the sad story, shown to us in flashbacks, of her marriage to no-goodnik Robert Manette (Gene Kelly)...

...an assignation that began promisingly enough, as the two souls communed in the balcony of the concert hall to the strains of Wagner's "Liebestode" from Tristan und Isolde. 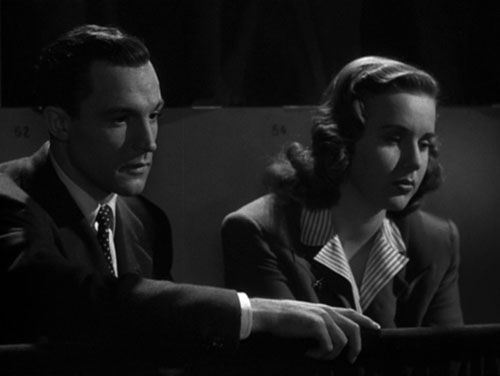 You know things aren't gonna work out well for the couple when Gale Sondergaard turns up as the mother-in-law. And you start worrying for Harens and Durbin, who seem to be getting along, when news breaks that Kelly's character has escaped from prison, and is looking for the wife he's sure is jilting him. Kelly specialized, of course, in likability and likable dance acrobatics in most of his later career, so it's interesting to see him using his formidable physicality here to convey the potential of threat. The flashback structure of the picture allows Durbin to play almost shockingly against type at the story's beginning and then revert to something like her standard innocence. But where her character finally ends up after all the trauma is one of the film's most troubling mysteries, in a way...In any event, while Andrew Sarris was not far off the mark in characterizing her performance as "lurid," there's certainly more to it than that, and a few Durbin fans have informed me that this constitutes the star's own favorite performance.

Beautifully shot by Elwood Bredel, who also did Siodmak's classics Phantom Lady and The Killers, Christmas Holiday is one of Siodmak's most compellingly delirious pictures. It's as fine an example as you'll find of what Kent Jones describes as the archetypal manner of Siodmak and/or Ulmer, "whose artistry was focused on satisfying genre conventions and the demands of narrative, and whose loftier ambitions were filtered through those conventions." Except...by the end of this particular picture, Siodmak throws away the filter, and, under the influence of Bunuel's Un chien andalou, reprises the Wagner and concocts a montage of incredible power and mystery. 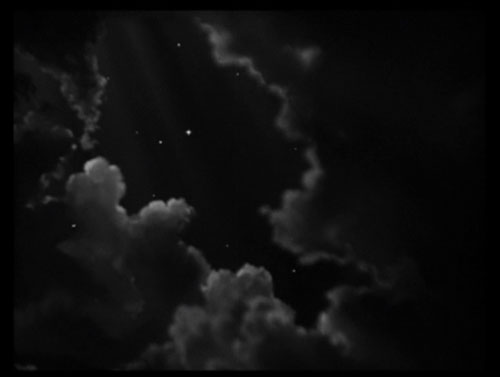 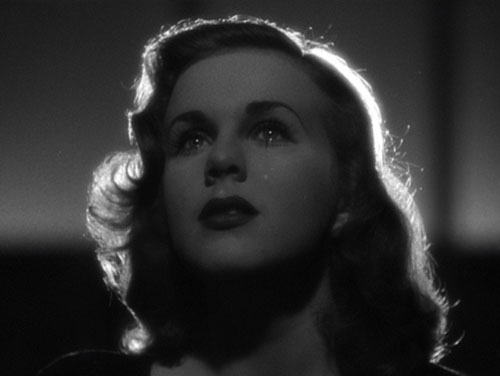 Talk about slipping in the irrational where no one's expecting it. The picture is available in a UK-issued Region 2 disc, and is a must for Durbin fans, Siodmak fans, and anyone looking for the unmapped places where the surreal and the popular cross paths.

(A shorter version of this piece appeared at my now-defunct "In The Company of Glenn" blog two years ago. I revive it here in the spirit of the holiday season rerun!)