These notes are for Bill Ryan. 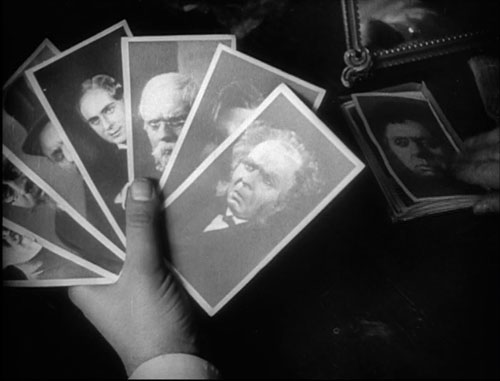 One would hope that for pretty much every cinephile reading this, the object announced above (from—you'd never guess—Eureka!/Masters of Cinema, Region 2 PAL U.K.) would sell itself. I can't imagine anybody who would deny that Fritz Lang's three films about the master criminal created by Norbert Jacques are not merely touchstones of genre cinema, not merely touchstones of auteurists cinema, but touchstones of cinema itself. First there is 1922's Dr. Mabuse, Der Spieler, a.k.a. Dr. Mabuse, the Gambler—although Mabuse maven David Kalat reminds us in the commentary that "Spieler" doesn't just, or only, mean "gambler," but also "actor," a person who is "in it;" in hip-hop parlance, "player" (or "playa"). It is a nearly five-hour film, in two parts, that evokes corruption and rot in a fashion that often recalls an all-night drug and alcohol jag—exhilarating highs melting into stomach-churning lows. "A story of the time," says the subtitle for the first part, and yet the picture could not quite keep up with the rot overtaking the Weimar republic.

Every Mabuse film turns out to be a story of its time. In the Der Spieler, the out-of-nowhere master criminal causes the collapse of the stock market. He ruins already worthless millionaires. He grinds hapless members of the aristocracy into dust. (He plays with the hare-brained children locked in the nursery. It's so early 20th century.) Because he can. 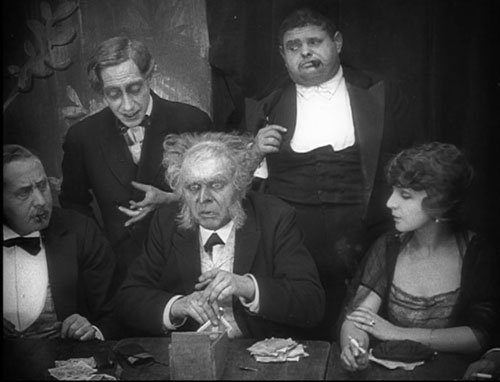 The German film scholar Siegfried Krackauer wrote a study of German film famously titled, From Caligari To Hitler; he could just as well have called it From Mabuse To Hitler. Except maybe the distance wasn't far enough to warrant the distinction. Of the three Mabuse films, my own personal favorite in 1933's Das Testament des Dr. Mabuse. Not only because it takes the famous intertitle from Murnau's Nosferatu, "And when he had crossed the bridge, the phantoms came to meet him" and crosses it with a reconfigured thought from Marx and Engels, "There is a specter haunting Europe," in this case the specter being fascism, not communism. But because the film deals with, from the very outset, a derangement of the senses. In the first scene the visual action plays over an aural scrim of near-unbearable industrial noise that challenges us to make head-or-tale/tail of the cat-and-mouse game played by human figures unknown to us. This is only the first of a continuing series of discombobulations.

In this film it is the ghost of Dr. Mabuse—or is it in fact the will of Dr. Mabuse, searching for its triumph?—that commands and compels various minions to erect an "empire of crime." It is a hallucinatory, almost hysterical vision that no plot synopsis can hope to contain. 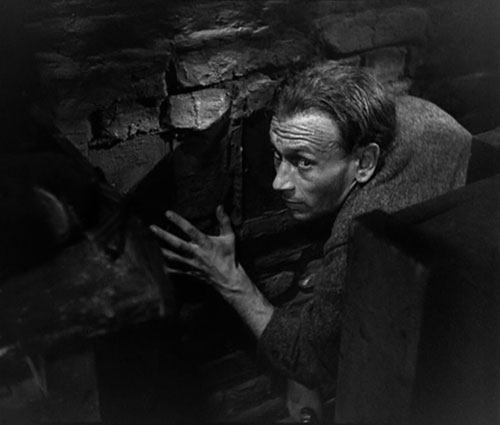 Around every corner is a new mystery, a mystery that the forces of some kind of technology—mostly the very cinematographic technology Lang is showing such an imperious mastery or—almost mockingly bar the viewer from penetrating. The film will give up its secrets when it's good and ready. As with the first look at the near hieroglyphic scratches on a pane of glass, that will soon be revealed to spell out "Mabuse"...and yet bring us no closer to the heart of what we're looking for, which is some sense of resolution. 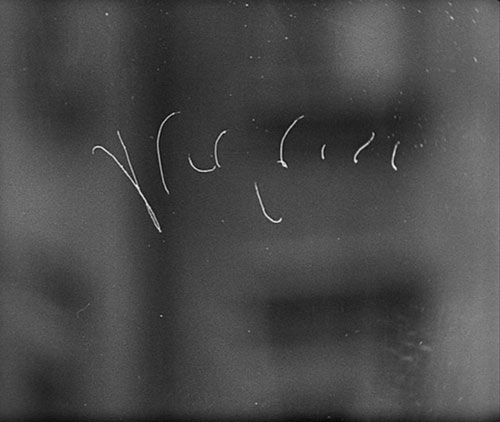 The horrific, terrific, grotesque visualization of Mabuse's spirit, presaging Francis Bacon and David Lynch and The Brain That Wouldn't Die and even, for heaven's sake, They Saved Hitler's Brain, tells us, in its way, that resolution is not in the cards. Only more terror. (It is interesting that, in some of the printed material accompanying these films in this set, latter-day interviews with Lang reveal him admiring Antonioni's craft but deploring the "hopelessness" of his films. If there ever was a definitively hopeless film, Testament is one.) 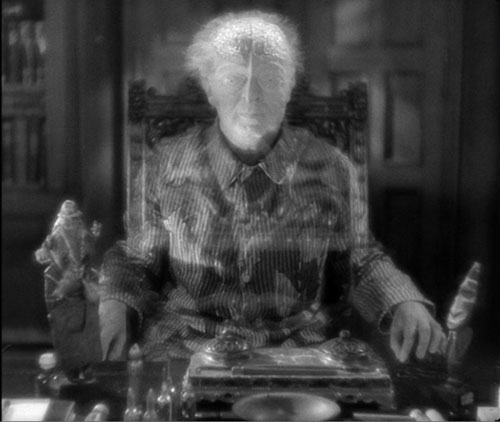 And finally there's 1960's seemingly visually threadbare but nonetheless utterly convincing Die 1000 Augen des Dr. Mabuse, in which the paranoia it commends is also something of a cheap commodity, where the fact that its scenario unfolds in a divided city both cannot and does not need to be mentioned, a picture that purposefully makes kitsch of dread! A picture in which Mabuse is revealed to be not a master criminal, not really an entity at all, but a feeling, a way of being. That this existentialist koan is wrapped in the trappings of a multi-European-produced B movie does not dilute its horror. No, in fact, it makes it resonate all the more. 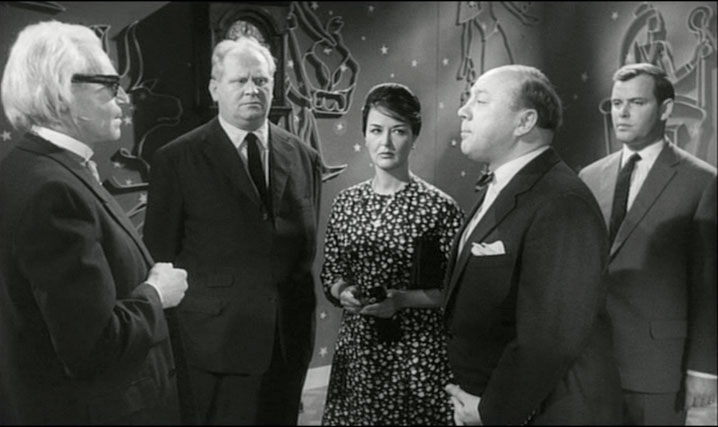 There's Gert Frobe, above, a couple of years before screen-villain immortality in Goldfinger. And below, Howard Vernon, his assassin here cooly doing an apprenticeship for Alphaville's Professor von Braun. Lang inadvertently creates a taxonomy of modern and post-modern screen villainy avant le lettre. And why not? His Mabuse Der Spieler laid it all out from the very beginning. 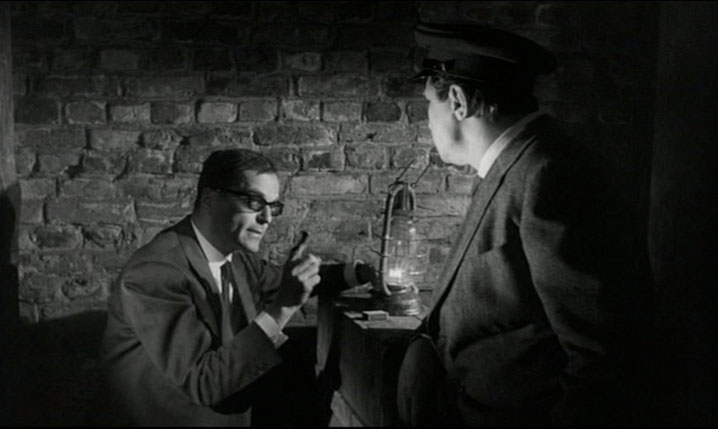 I noted this in a prior piece at this site: "If I argue in favor of Mabuse [being the cinema's pre-eminent villain], it's not just because so many great cinematic supervillains in his wake have put 'Doctor' in front of their names. It's because, as formidable as those prior figures are, Mabuse is really the most modern of them, sliding, inexorably, into the realm of the post modern. First there's the nature of his schemes; the robber barons Mabuse brings to ruin in the early films are the descendents of Balzac, yes, but there's nevertheless something very contemporary about the scene early in part one of the first film in which, by way of corporate espionage, Mabuse brings down the stock market.

Then there's the matter of Mabuse's disguises, which make him an unusually fluid character, one who can mix with the most inaccessibly super-rich and hunker down in the lowest gutter later in the same evening. He is in a sense a sort of ideal, in that he is genuinely classless.

And finally, there's the question, 'What does Mabuse want?' We never do find out, ever, really, in any of the three films. Money? Yes, of course, who doesn't. Control? Absolutely. But to what end? What's his program? What's his motivation? He doesn't really seem to have one, just as he seems not to have a past, to have apparently sprung from the unconsciousness of human rot. With respect to motivation, he anticipates Martin Amis' pronouncement in the novel Money: 'I sometimes think that, as a controlling force in human affairs, motivation is pretty well shagged out by now. It hasn't got what it takes to motivate people any more. Go for a walk in the streets. How much motivation do you see?'"

It's worth noting that the existence of supervillainy in the Mabuse films never gives rise to what's become, elsewhere, its cinematic corollary: any kind of super police. In the first Mabuse film, the elusive villain is pursued not by a Judex, not be a secret agent or squad of such, but by ordinary, prosaic, "State Inspector" Wenk. Who only manages to discover—let alone bring down—Mabuse via dumb luck. In Testament, Mabuse's nemesis is the genial, pleasure-loving Inspector Lohmann, whose police force let the gangster underworld kidnap Hans Beckert to trial by kangaroo court in Lang's previous M. And in Thousand Eyes, it's Frobe's constantly shrugging and brow-furrowing police Commisar Kras (Frobe's mannerisms in this performance aren't very far off from those he uses for Auric Goldfinger) who utterly and finally fails to get his man, or what there is that actually exists of him. There's no James Bond here. No Phillip Marlowe. Not a Nick Carter. Or a Jerry Cotton. We might as well not even trouble our institutions, the films say. They won't save us from Mabuse.

So, you ask, snapping your fingers in my face, how is this box set? Oh, my, it is worth rhapsodizing over. Each film is presented in a spanking new transfer derived from the most recent restoration, and as I hope the screen grabs testify, each one looks fantastic. I grant,Testament does not boast as many extras as the 2004 Criterion Collection disc did/does—that edition contained the simultaneously-shot French language version of the film and some remarkable comparison videos, and more. The extras in the box, as a whole, seem...well, I wouldn't say on the scant side, they just don't represent as immediately obvious a cornucopia as what's on, say, the Criterion Testament. The hallmark supplement[s] are the three new film-length commentaries from film historian David Kalat, who recorded commentaries for previous editions but synthesizes and expands on them here. The author of the definitive historical text The Strange Case of Dr. Mabuse, you could say Kalat owns the material, and you wouldn't be wrong. But while I bow to no man in my admiration for his erudition, scholarship, and devotion, I will say that as an audio commentator his penchant for dramatizing and his sometimes passive-aggressive polemicism/didacticism do get in the way of the incredible wealth of information he has to impart. That bit I wrote above, about those who won't save us from Mabuse? Kalat's doing stuff like that all the time. "There is no Dr. Mabuse, which is another way of saying that anyone could be Dr. Mabuse." Fair enough. But then there will be something along the lines of, "In [Ministry of Fear] Ray Milland gets caught up in a dastardly criminal conspiracy full of false identities, fake names, surveillance equipment and secret messages. THAT criminal gang went by the name of…hmmm…the Nazi Party." It's like, dude, what are you, dramatic chipmunk or something? I won't get into some of Kalat's other hobbyhorses (although I will advise that if you meet him at a party, don't get him started on whether it's possible for any film not to have some kind of mercantile motive behind it), because I don't want to be seen as coming down too hard on him—because the commentary is, at its best, incredibly worthwhile. Let me say it again, and put it in bold: Incredibly worthwhile. I'll add that I don't ever get the same feeling of antsiness that I allude to above when reading Kalat's excellent book.

In short: an incredible set, can't wait to watch it again, thank you Masters of Cinema and David Kalat, a thousand times thank you.