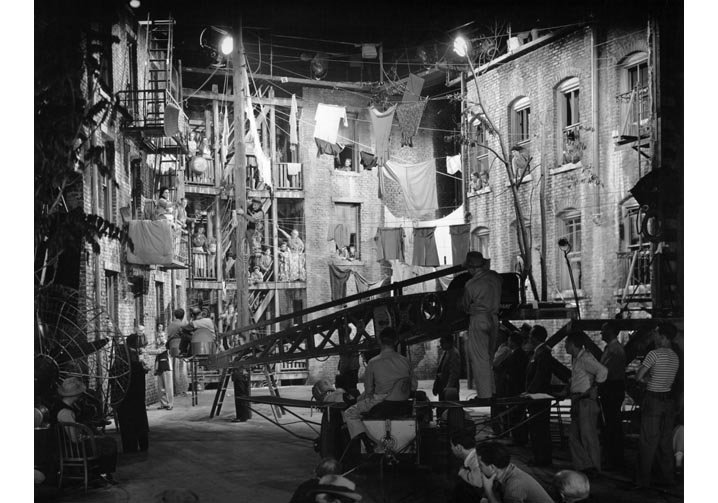 As I noted at the beginning of this year, though Elia Kazan has been gone for nearly seven years now, not everyone has finished arguing about him. He still bears what the Chicago Tribune's Michael Phillips calls "the eternal asterisk on a remarkable directorial career," namely, his role as a namer of names for the House UnAmerican Activities Committee (HUAC) in 1952. Reporting for Reuters, Silvia Aloisi notes that Kazan's furiously disputed decision is not overlooked in A Letter to Elia, an hour-long documentary co-directed by Martin Scorsese and Kent Jones which has premiered in Venice, screened at Telluride and will be shown again at the New York Film Festival on September 27 along with Kazan's America, America (1963).

Aloisi: "In his memoir, Kazan wrote: 'I'd hated the Communists for many years, and didn't feel right about giving up my career to defend them. Was I sacrificing for something I believed in? I've repeatedly astonished people by what seem to be total reversals of positions and attitudes.' In the documentary, which features a long interview with Kazan, he says that what he did was 'only the more tolerable of two alternatives that were either way painful and wrong.'"

Writing in the Independent, Geoffrey Macnab finds that A Letter to Elia "turns out to be as much about Scorsese as it is about Kazan. It is a deeply personal reflection on Kazan's career which has much of the same power that characterised Scorsese's impassioned earlier documentary, A Personal Journey Through American Cinema." The film "works on many different levels. On one hand, it is a mini-masterclass on Kazan's work from a director of similar stature. On another, it is a perceptive character study. Scorsese is fascinated by Kazan's background as an Anatolian Greek whose family emigrated to the US and then fought for their stake there. But the film doesn't lumber us with many personal details. Scorsese's real focus is on the movies. It is his contention that 'maybe you learn more from the work than the man.' By studying Kazan's films, especially his autobiographical America America (1963), you discover far more than you might from interviews or biographies."

You'd do well, by the way, to take seven minutes out of your day for Kevin B Lee's 2007 video essay on America, America.

"Before enumerating the many things the film does well," writes Leslie Felperin for Variety, "it's worth noting what's not there. It would seem rights problems and clearance costs have reared their ugly heads to conspire against the inclusion of excerpts from Kazan's A Streetcar Named Desire (1951), which arguably rivals [On the Waterfront] in renown today. Although the docu samples a fair bit from 1945's A Tree Grows in Brooklyn, the first film Kazan helmed, and even shows a delightful montage of Kazan's bit-part thesping turns prior to that, barely a mention is made of such important titles as Gentleman's Agreement (1947), Baby Doll (1956) or The Last Tycoon (1976).... Having said all that, what the film does cover, it covers very well. Scorsese and Jones, with an ace assist from editor Rachel Reichman, weave, layer and juxtapose clips from the films they do have access to, along with archival footage of Kazan himself being interviewed, and straight-to-camera exposition from Scorsese."

"Analysis of the films themselves is limited to obvious emotional responses when it'd be nice to hear Scorsese wax a little more technical, but any excuse to wallow in footage from On the Waterfront or A Tree Grows in Brooklyn again is a good one," writes Guy Lodge at In Contention.

The Telegraph's David Gritten finds A Letter to Elia to be "an affectionate tribute to an enormous talent. It makes you want to seek out Kazan's films and watch them again. And emerging from the screening, it makes you wonder how many leading figures of films today will be praised in such calm, authoritative terms 50 years from now."

Update, 9/7: "On Tuesday representatives for Mr Scorsese said that A Letter to Elia... will be shown on PBS's American Masters series on Oct 4, and included in the Elia Kazan Film Collection boxed set that Twentieth Century Fox Home Entertainment will release on Nov 9," reports Dave Itzkoff for the New York Times. "The boxed set will contain 15 Kazan films including 5 — A Tree Grows in Brooklyn, Viva Zapata!, Man on a Tightrope, Wild River and America, America — that have not been released on DVD. The films will also be shown theatrically in a traveling series whose dates and locations will be listed online at lettertoelia.com."

Update, 9/9: "A Letter to Elia cuts closer to the bone than anything Scorsese has done since the 1990s," argues Todd McCarthy. "[B]y mixing the authenticity of his initial emotional response to Kazan's films with his vast cinematic erudition, and by deciding to largely jettison the usual documentary baggage of archival footage, interviews with associates and Hollywood history factoids, Scorsese and Jones have been able to concentrate nearly all their attention on that which is of the greatest value in Kazan's work and to throw an intense spotlight the man's complexity and distinction as an artist."

Update, 9/13: "The longest section of the film is devoted to East of Eden,'" notes Stephen Farber in the Hollywood Reporter. "Scorsese reports that he saw the movie repeatedly when it was released in 1955. In fact, he says candidly, 'I stalked it.' Its themes of family conflict and reconciliation as well as its baroque visual style clearly had a huge impact on him. Scorsese was also overwhelmed by the naturalistic acting of Waterfront and by the autobiographical nature of America, America, which encouraged the budding director to believe that he could draw stories from his own Italian-American experience. Scorsese met Kazan for the first time in 1964 when he was a student at NYU. Later the two directors became friends, and Scorsese reports that Kazan liked some of the younger director's movies and disliked others. But the influence of Kazan's deeply emotional films on Scorsese's own work was incalculable."

Coverage of the coverage: Venice and Telluride 2010. For news and tips throughout the day every day, follow The Daily Notebook on Twitter and/or the RSS feed.