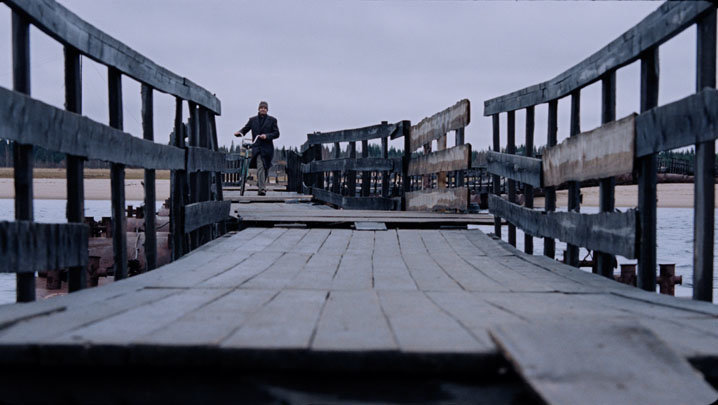 Shane Danielsen opens his latest dispatch from Venice to indieWIRE "with something breathtaking: the Russian film in competition, Alexsi Fedorchenko's Silent Souls, which announced its excellence from the very first shot — of a man on a bicycle riding down a country road, a wooden birdcage balanced behind the seat. The surface of the road glittered, cobalt-blue and black; beside it were shoulders covered in autumn leaves, and beyond this, the long, damp, pea-green grass. Overhead, the sky was low and heavy, the colour of wet clay.... rom a mansion wreathed in morning mist, like an apparition from late Tarkovsky, to a bridge comprised of a linked string of floating pontoons, coiling in the water like a serpent, to a long, unbroken take of two men reverently washing the pale, limp body of a dead woman, every shot was surprising, deeply considered, intensely satisfying. And every cut had the force of a small detonation."

Silent Souls is "set in the Lake Nero region in west central Russia, where the ethnic Meryan community (who trace their origins to Finland) are still in evidence," writes the Guardian's Peter Bradshaw. "Factory boss Miron (Yuri Tsurilo) is devastated at the death of his wife Tanya (Yuliya Aug) and asks his friend Aist (Igor Sergeyev) to help with traditional Meryan funeral ceremonies. Her body must be cremated, in the open air, and the ashes deposited in water. But before this, there must be 'smoke' — that is, the frank and rapturous discussion and anecdotes about the deceased's sexual allure. Well, the audience has to take on trust the reality of some of these ancient traditions, but they are certainly startling."

"Arguably a short film spun out to a lean 75 minutes, the calm urgency of the men's mission keeps it compelling throughout," writes Guy Lodge at In Contention. "[S]hould your ear never quite tune into to the mordant poetry of the dialogue as mine eventually did (sample line: 'He was a queer fish, that self-taught Merjan poet'), the grace and depth of DP Mikhail Krichman's startling widescreen compositions are handsome compensation."

"Fedorchenko gets at some incredibly delicate ideas about grief and memory, and hints at the way landscapes that were gone before we were born somehow continue to live inside us," suggests Stephanie Zacharek in Movieline.

Here's an un-subtitled report on the film for Russian television — just for the sake of sampling a few scenes. Warning: Once the reporter signs off, we slip straight into commericials.

Eric J Lyman for the Hollywood Reporter: "'The slogan of the film was tenderness... we wanted tenderness to be transformed into nostalgia and for those two emotions to become synonymous with love,' said Fedorchenko, who previously won the Venice Orizzonti documentary award in 2005 for Pervye na Lune (First on the Moon)." More on the press conference from the AP's Colleen Barry.

Silent Souls is an "extraordinarily beautiful film, one of the most striking in the competition so far," writes Derek Malcolm in the Evening Standard.

Updates, 9/9: "This is a haunting film, an evocation of how long-lost cultures can seem to inhabit certain landscapes even when little remains of them other than the knowledge that they once were there," writes Roderick Conway Morris for the International Herald Tribune.

Even as "Miron shares intimate details of his life with Tanya," writes Mary Corliss for Time, "Fedorchenko doesn't clear up all of the secrets of this marriage; that is part of the film's subtle, folkloric power."

Update, 9/10: This is the film that the Telegraph's David Gritten would "love to see win the Golden Lion... It's 75 minutes of art-house heaven."

Update, 9/13: "It's a serious, thoughtful, very respectful work, and I'm happy to see it doing well, but I just wasn't quite as taken with it as many of my colleagues," writes Josef Braun, who "found it too reliant on voice-over, too overbearing in its use of music, and, even when taking the somberness of the action into account, its performances still struck me as a little more lifeless than seemed entirely necessary."

Update, 9/14: In a dispatch to Cargo, Michael Sicinski finds that, while Fedorchenko's "marriage of actual historical demonstration and emotional reverie could have fallen apart at any moment, seeming either didactic or overwrought, Fedorchenko succeeds in generating a hushed, mystical tone that is at the same time absolutely material, as though we are viewing a piece of living history unfolding before us... In terms of activating the classic Eastern spirituality of the elements, the territory of Tarkovsky and Paradjanov, I kept thinking about how many other Russian filmmakers today try so hard to do what Fedorchenko appears to have done so naturally."