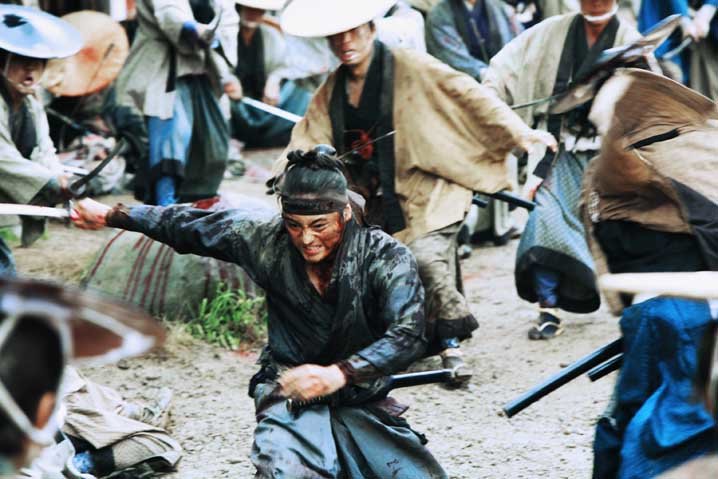 "Takashi Miike must be at least two people," writes Lee Marshall in Screen. "The Japanese maverick averages between two and three films a year — and yet this last-man-standing samurai tale, his second release so far in 2010, is a confident, stylish swordplay feature played in a nicely jaded, 'twilight of the gentleman warrior' key, that bears little trace of haste. It takes a while to build through the occasionally dull and hard-to-follow historical exposition of the over-talky opening scenes. But once the Seven-Samurai-style band of brothers is assembled, 13 Assassins is pure pleasure: and it culminates in a magnificent 45-minute showdown that has to be the best final battle sequence in cinema since, oh, Kill Bill at least."

"How can a dozen dedicated fighters, plus a crazy fellow who wanders into the action, overcome the attack of 200 professionals under the luridly evil Lord Naritsugu?" asks Time's Richard Corliss. "Just watch! The good guys are aided by superior swordsmanship, a stampede of blazing cattle and more dynamite than was exploded in World War II. Miike calls this a 'samurai terror film showing the flowers of life and death. Simple, radical, beautiful.' Fans of the director know he always makes good on his promises."

For In Contention's Guy Lodge, "13 Assassins turned out to be one of the most unexpected joys of the Competition lineup: a straight-up, even classical, samurai spectacular that trades in bone-dry humor without placing itself entirely in genre-film quote marks. 'You think the age of war was like this?' marvels one wide-eyed warrior, surveying the corpses left by a particularly vigorous round of ketchup-colored carnage. 'It's magnificent!'"

"The director's scream-and-scream-again horror films, like the unforgettable Audition, and his goofy superhero send-ups (Venice is also hosting two of his Zebraman titles) would suggest he would go to work gleefully deconstructing the samurai canon," writes Deborah Young in the Hollywood Reporter. "But once again, Miike surprises his audience. Strangely enough, he opts to follow the genre's social code and dramaturgy almost slavishly, and the result is a beautifully lensed but rather unremarkable Japanese period piece."

In Variety, Leslie Felperin notes that "the action starts with an attention-grabbing sequence showing a nobleman (Masaaki Uchino) committing hara-kari." There's a "[s]lightly draggy middle act," but the "last 45 minutes or so basically offers one long battle scene.... Most welcome of all, Miike proves here he can play it straight when he wants to, and while there's just enough humor to leaven the proceedings (especially when things are at their grimmest, often courtesy of the deliciously, near-satanically evil Naritsugu), there's no winking at the audience or any attempt to subvert the genre."

"Miike says he remade the 1963 classic Thirteen Assassins to help Japan's younger generation learn about the past," reports Sheri Jennings for the AP. "'I wanted the audience to realize that this story is not taking place in the remote past, but rather in a recent past when our grand-grand parents lived,' the director told a news conference Thursday ahead of the film's premiere in competition for the Golden Lion. 'It is our story, the story of our everyday life.'"

Update, 9/11: "For the first fifty minutes, it gathered steam," recalls Shane Danielsen at indieWIRE. "Men were enlisted, plans outlined. There were conversations about the nature and limits of honor, the implacability of fate and and the longing unto death. The mood was both wry and tender, resigned to the fate these men had chosen. And then the battle began. From the ingenuity of the Thirteen's methods (two words: flaming boars), to the relentless, well-choreographed carnage of the final half-hour, this was a treat, by turns funny and gripping and sad — and one which, in the process, revealed those recent Yoji Yamada samurai flicks for the polite, pedestrian efforts they are."

Update, 9/13: "Miike's bloody fingerprints are felt in the bloodcurdling scream of one of the villain's limbless, tongueless victims, but the true authorial challenge lies in figuring out the Japanese iconoclast's attitude toward samurai honor," writes Fernando F Croce at the House Next Door. "Foregrounding the journey's waste more than its glory, he nevertheless can't help but side with the warriors' antique codes with a reverence one suspects the slash-and-burn Miike of old might have scoffed at."

Updates, 9/16: "The mayhem isn't a surprise from a filmmaker of Miike's reputation — though he handles it with more aplomb than usual — but what did surprise me about 13 Assassins was how far it goes in upending the classic samurai picture," writes the AV Club's Scott Tobias. "In Miike's mind, there's nothing honorable about the thoughtless commitment to honor and code, especially if it means protecting dastardly men who don't deserve that kind of loyalty. It's a movie both punk and moral, and my favorite of his (that I've had access to, anyway) since Audition."

"It is Miike's obstinate preference to still reveal things inside the most conventional of projects, structures, or details that marks him as one of the most continually fresh and exciting of directors, and 13 Assassins bares all the scars of such a beautiful approach," writes Daniel Kasman here in The Daily Notebook.

Updates, 9/22: "[A]part from a few bracing moments, such as a sequence between Shinzaemon and a young woman mutilated by Naritsugu, Miike the old prankster has not shown up to play in 13 Assassins," writes Michael Sicinski for Cargo. "Again, as with Mysteries of Lisbon, registering a complaint with the Ministry of Auteur Studies seems churlish when the films in question are so thoroughly accomplished on their own terms. Still, cinema doesn't exactly have oddballs to spare."

Magnet Releasing, Magnolia Picture's genre arm, has picked up 13 Assassins, reports Bruce J Renninger at indieWIRE. The film's also "been chosen as the Closing Night film at this year's Fantastic Fest in Austin. Magnet will release the film theatrically in the US in early 2011."

Update, 9/24: "There is plenty of high-charged splatter action, with black comic touches, in the familiar Miike style," writes Mark Schilling in the Japan Times. "But in the 50-minute climactic battle, the heroes change from cocky, near-superhuman fighters, wasting opponents with everything from massive explosions to sticks and stones, to wounded, desperate men fighting for their lives against overwhelming numbers, filmed in dark, grainy shades that foreshadow doom. There is a pathos in their struggle that is new to Miike's work — but often present in the great samurai epics he is trying to equal."