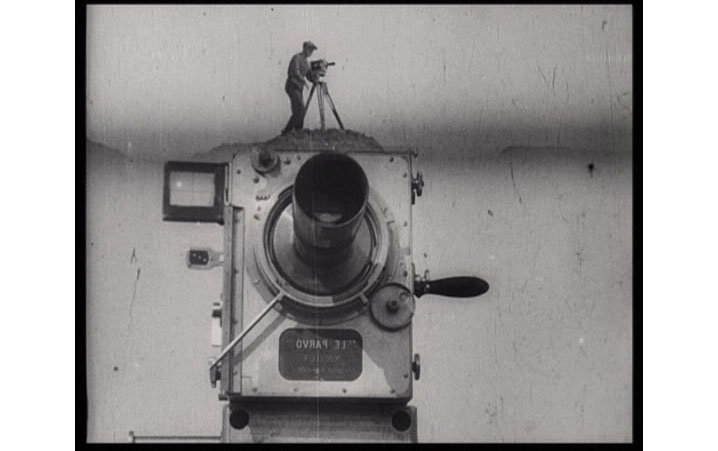 MoMA's Dziga Vertov retrospective opens today with the US premiere of the newly restored, original full-frame version of Man with a Movie Camera (1929) with live musical accompaniment by Dennis James & Filmharmonia Ensemble. Following this roundup of what others are saying about Vertov, we'll be running a few of our own pieces here in The Notebook over the coming days and weeks.

"In many ways the Soviet filmmaker Dziga Vertov (1896-1954) was an artist of his time," begins Dennis Lim in the New York Times. "A kindred spirit of the Constructivist artists who thrived in the wake of the 1917 October Revolution only to be stifled by the Stalinist policies of the 1930s, Vertov was a futurist at heart, a poet of the machine age. For a filmmaker in the reborn Russia the thrill of the new was palpable. Vertov, who saw theory and practice as inseparable, sought to uncover what made the young medium of moving images distinct from the other arts. Every film and every manifesto was an opportunity to examine the latent possibilities and harness the untapped power of cinema."

He "was the most contentious and inventive of Soviet filmmakers and, for a time, one of the most obscure," notes J Hoberman in the Voice. "The French rediscovered him in the late 50s as the pioneer of cinéma vérité; 60s radicals claimed him as a proto-McLuhan media theorist and film artist who fused two vanguards, aesthetic and political." Man with a Movie Camera, "evoking the sensory bombardment of 20th-century urban life, employed strategies of visual analogy and associative montage so intricate that they are still yet to be named. At once a Whitman-esque documentary-portrait of the Soviet people, a self-reflexive essay on cinematic representation, and an ode to the transformative power of human labor, this fantastically cross-referenced, cubo-kaleidoscopic city symphony took parallel action to the third — or fourth — dimension. Designed to destroy habitual movie watching by revealing the ways in which the camera and film editor construct reality, Vertov's masterpiece had the remarkable effect of encouraging the spectator to identify with the filmmaking process. Indeed, given the density of the editing, this supreme film-object demands to be studied on an editing table to be fully appreciated. Small wonder that it was condemned, by Sergei Eisenstein, among others, for formalist madness and fetishized technique; there had never been anything like it."

Michael Joshua Rowin for the L: "His principle idea was that the camera was an invention that could help man explore and discover uncharted realms of the visual world. The form that would best exploit cinema's potentialities would combine documentary (what Vertov deemed 'life caught unawares'); cinematographic tricks (split-screens, stop-motion animation, and extreme low and high camera angles are par for the course); and rapid and often violent editing techniques. The beginnings of Vertov's practice are best seen in Kino-glaz ('camera-eye,' 1924) and his Kino-pravda ('Cinema-truth,' 1925) series of newsreels. Both present and reconfigure daily events and dramatically diverse conditions in the chaotic, newly formed Soviet Union, while displaying Vertov's experimentation with all variety of montage, none as hilarious and completely unprecedented as the reverse-motion journey of a cow from edible beef to slaughterhouse victim (its butchered entrails put back in place via movie magic) to unwitting farm animal."

A bit more on the series running through June 4 from MoMA: "International Vertov scholars, artists, and filmmakers including William Kentridge, Peter Kubelka, Guy Maddin, and Michael Nyman will offer a contemporary perspective on Vertov's work and legacy by introducing screenings and participating in a panel discussion on May 7… Also featured are 11 programs of Vertov's silent films, drawn primarily from the Austrian Film Museum's unparalleled collection, including the premieres of fourteen Kino-Week films from 1918–19, and, for the first time together, all of his extant Kino-Pravda films from 1922–25. The exhibition continues with such masterworks as Stride, Soviet! (1926), A Sixth Part of the World (1926), The Eleventh Year (1928), Enthusiasm: Symphony of the Donbass (1930), Three Songs of Lenin (1935/38), and other sound films."

Moving Image Source runs an excerpt from the introduction to Yuri Tsivian's Lines of Resistance: Dziga Vertov and the Twenties in which he examines "those instances in Vertov's movies when the movie itself attempts to behave polemically."

Viewing (6'23"). From Fandor's Kevin Lee: "Watch our own tribute to Vertov and the experimental filmmakers of the 1920s, Do-It-Yourself Auteurs: A Cinematic Blizzard, produced with Steven Boone and Roger Ebert."

Update: Adrian Curry highlights some of the best posters ever designed for Vertov's films. Stunning stuff.

Update, 4/20: "The most radical creative impulses of the Soviet avant-garde of the 1920s emphasized the supposed ability of art to control and reshape reality, a belief having much in common with the project of the creation of a New Soviet Person," writes Zack Friedman at the BOMBlog, "and Vertov, like many of his peers, glorified the power of the state. Film was first and foremost a weapon for political struggle. The appeal of Vertov's work today, though, is to get another chance to see the full extent of possibilities available to anyone with a movie camera — the feeling of unboundedness that appears to someone who can edit space and time."