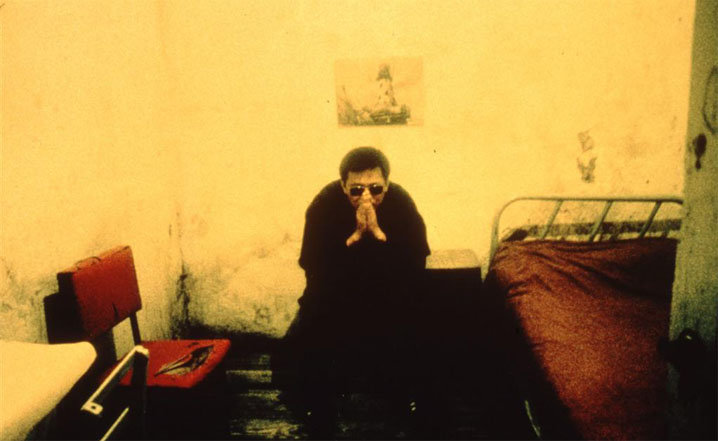 While we're looking forward to this year's Cannes Film Festival, indieWIRE editor Eugene Hernandez has been looking back at past editions. The other day, he recalled "one of my favorite moments in nearly a decade of great Cannes experiences," a presentation of a short film and a talk by Wong Kar-wai back in 2001. Naturally, many were hoping that The Grand Master, based on the life of martial arts legend Ip Man, would be ready for Cannes 2010, but at the moment, it's slated for a 2011 release in Hong Kong. Meantime, we can crank up the anticipation by watching or re-watching — for free, depending on where you are — Happy Together (1997), for viewers in the US, and 2046 (2004), for those in New Zealand. They're part of the ongoing online Festival de Cannes presented by Stella Artois and The Auteurs.

Back in 1997, Russell Smith wrote for the Austin Chronicle, "Happy Together is the latest and best in the 39-year-old Hong Kong director's occasional series of films about love-obsessed young folks adrift in haunting urban dreamscapes that reflect both the alienation in their hearts and the overheated yearning of their imaginations."

"Structurally and dramatically this is all over the place, but stylistically it's gripping, and thematically it suggests an oblique response to the end of Hong Kong's colonial rule," wrote Jonathan Rosenbaum in the Chicago Reader the following year. "Incidentally, a friend of mine from Buenos Aires tells me that this film captures that city better than any other."

The film won Wong the Best Director award at Cannes 1997. To go deeper, see Robert M Payne in his essay "Ways of seeing wild: the cinema of Wong Kar-Wai" for Jump Cut 44 (Fall 2001).

2046 "provoked a modest scandal," Manohla Dargis recalled in the New York Times in 2005. "Mr Wong, who famously works to his own rhythms, either very fast or very slow, arrived at Cannes late enough that the initial screenings had to be rescheduled. The version shown at Cannes was clearly unfinished and, perhaps as a consequence, 2046 was wanly received, even by some Wong admirers. More than a year later, the special effects are in place, as are crucial images that reinforce both the film's themes and its structure. The result is an unqualified triumph."

"2046 retains fragments of virtually everything its creator had ever thought it might be, making it less a 'project' than an organic coalescence of the artist as a not-so-young melancholic," wrote Michael Atkinson in the Voice. "In fact, in many ways it forms a Wong codex — his other films haunt the movie's fringes and anterooms.... [I]t's a pulsing sign system of repeated melodramatic totems, ravishingly pregnant moments, and the sadness that comes from history and time's arrow. But the trip is invigorating, bursting with the insistent vitality of first-time lovemaking."

Wong was in Competition at Cannes two other years, too, with In the Mood for Love (2000), a film that would appear at the top of more than a few "best of the decade" lists in the past months, and My Blueberry Nights (2007), his first film in English.