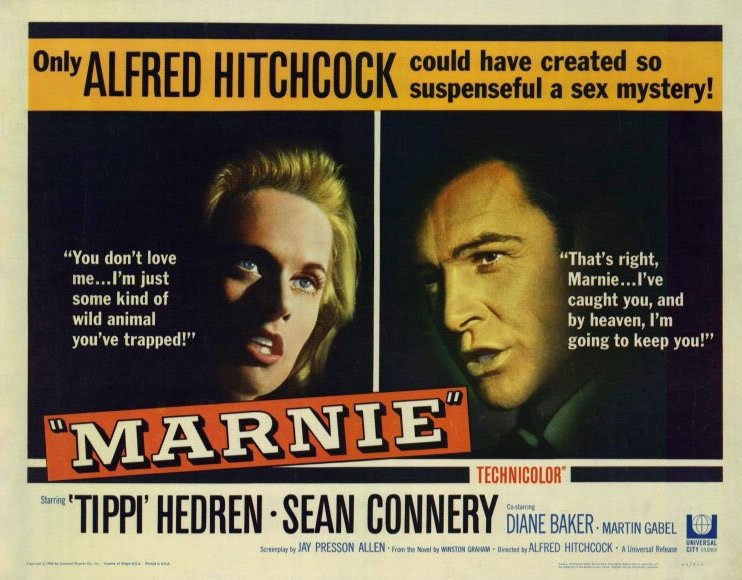 Leo Goldsmith introduces Late Hitchcock, a series running all week at Not Coming to a Theater Near You: "The border between guilt and innocence is fuzzier than ever in this phase, as is the line that separates sex from violence. The formation of the couple, the overriding principle of Hitchcock's work from the very start of his career, is especially embattled throughout Hitchcock's later films, challenged in the most shocking fashion in Marnie's marital rape scene, all but totally ignored in smothering political endgames of Topaz, and brutally cut short through violent sex-murder in Frenzy." Not Coming will be presenting Marnie at 92Y Tribeca on Friday. Update, 12/16: The series so far: Leo Goldsmith on The Birds and Marnie, Ian Johnston on Torn Curtain and Rumsey Taylor on Topaz. Update, 12/18: Teddy Blanks on Frenzy. 12/19: Rumsey Taylor on Family Plot.

In other news. At Film Studies for Free, Catherine Grant alerts us to a new issue of Screening the Past, "Screen Attachments," edited by Catherine Fowler and Paola Voci: "The obvious highlight is a brilliant article by Francesco Casetti ["Cinema Lost and Found: Trajectories of Relocation"], but a quick glance at all the other articles indicates a very high quality issue indeed. FSFF's own favorite is Fowler and Voci's study 'Brief Encounters: Theorizing Screen Attachments Outside the Movie Theatre,' with its compelling use of Sara Ahmed's notion of orientation. The Classics and Reruns section also has some real gems."

The Playlist's Oliver Lyttelton notes that screenwriter Steve Zaillian recently told Time Out London that, before Jafar Panahi was arrested, the Iranian director had intended to direct an adaptation Zaillian had written of Khaled Hosseini's A Thousand Splendid Suns.

New York. Empty Quarter screens tonight and tomorrow at Anthology Film Archives. Mark Holcomb in the Voice: "A brooding meditation on open space, forward motion, and the human impulse to make something out of nothing (and, inevitably, vice versa), this 16mm black-and-white documentary from Portland artists Alain LeTourneau and Pam Minty is anything but the haphazard slideshow it first appears to be."

DVDs. "Over the course of his career at the Nikkatsu studio, brazen B-movie maverick Seijun Suzuki perfected the art of subversion from within, eradicating any vestige of predictability from his freewheeling forays into genre experimentalism," writes Budd Wilkins for Slant. "Revealing a flair for homegrown surrealism, Suzuki brings the defamiliarization effects of 'dream work,' condensation and displacement, to bear on Tokyo Drifter [1966], yielding the most termite-like among his works (to invoke Manny Farber's term), a film that leaves 'no sign that the artist has any object in mind other than eating away the immediate boundaries of his art, and turning these boundaries into conditions of the next achievement.' Branded to Kill [1967], Suzuki's final film for Nikkatsu, after which the studio promptly fired him, attempts to escape the prison house of genre entirely, morphing into a fever-dream series of nightmare tableaux, but Tokyo Drifter seems satisfied to beat its head against the walls of its solitary-confinement cell."

For Criterion, Howard Hampton has more on Tokyo Drifter, Tony Rayns, more on Branded to Kill. And Bill Ryan considers both.