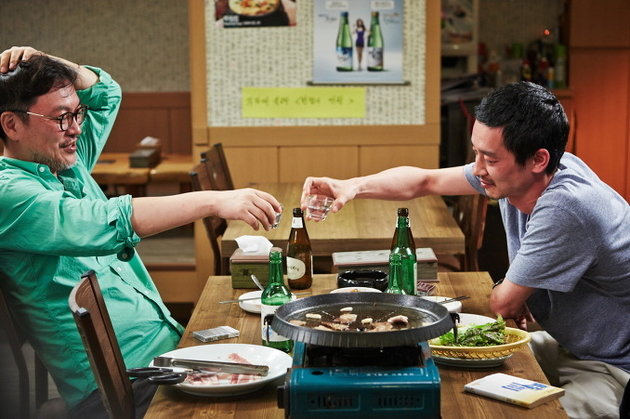 I can’t help but admire (and be frankly envious of) the indefatigable way in which you, as the festival nears its end, push full speed ahead into every type of film, accumulating an amazing number of viewings both narrative and avant-garde. I seem to head out somewhat in the opposite direction, stepping in and out of screening rooms while taking time to just wander the drizzly streets, browse the bookstore, and have coffee with friends whom I probably won’t be seeing again for another year. It’s during these mellow closing days, which contrast sharply with the frantic compression of the first week, that I often have some of my most surprising encounters with people and films.

Maybe that’s why I enjoyed Hong Sang-soo’s Hill of Freedom so much. A film about visitors and match-sized flares of irritation and infatuation, it could pass for an evocative snapshot of the festival experience in addition to being a typically refreshing, bittersweet comedy from the prolific Korean director. And it’s funny, too. The title itself might be a joke, its intimations of heroic monumentality applied to nothing more than the name of the tiny, semi-hip Seoul coffee shop where the gabby characters cross paths. They include a Japanese ex-teacher (Ryo Kase) seeking to reunite with a former flame (Seo Young-hwa) and the comely, flustered bar worker (Moon So-ri) he tentatively takes up with. In characteristic Hong fashion, this sliver of a plot is adorned with refined formal play: The narrative is visualized as the protagonist’s old girlfriend reads from his letters, letters which have been scattered and reshuffled and have missing pages, even. Add to that the fact that, since the central character speaks no Korean, a not-quite-fluent English is adopted as everybody’s maladroit lingua franca. (To judge from our colleagues’ cheerful impressions of some of the most memorably awkward lines, Danny, this might be Hong’s most quotable work yet.) In other words, 66 quietly glowing minutes from an auteur whose perspective remains at once lulling and stirring, mordant and humane.

Last year I think I compared watching a Hong film to running into an old friend. On the other hand, watching a Hal Hartley film—more specifically, watching Hartley’s Ned Rifle—is like running into an old professor who’s ragged, fatigued, a bit lost but still heroically hanging on to his ideals. The final panel in the indie-scene veteran’s ambitious trilogy (Henry Fool was the saturnine-poem original, Fay Grim the espionage-burlesque sequel), the film follows the title character (Liam Aiken), drifting through a series of glassy backdrops like a stand-in for one of Bresson’s models, reformed by religion yet determined to kill his father. Along the way are plenty of familiar faces from the director’s private universe: Parker Posey, as alluringly neurotic as ever; Thomas Jay Ryan, once Mephistophelean but now affectingly windy; James Urbaniak as a tenacious poet turned lowbrow comedian. (An outstanding new addition: The provocative instability of Aubrey Plaza.) Hartley’s delight in artifice, his practiced Straubian deadpan, and his off-kilter tempo are all in place, and just as perplexing in their mix of the manic and the forlorn as if they were back in the old Sundance days. I was never a consistent admirer, yet Hartley has persevered on a personal path that time has deepened rather than eroded—what once was merely mannered now feels at times plangent.

A 1968 Soviet film might be a peculiar note on which to close my festival coverage, but I just couldn’t pass up TIFF’s screening of one of the restored version of one of my all-time favorites, The Color of Pomegranates. As soon as crimson juice from the eponymous fruits spilled and stained the white cloth of the opening shot, I was once more catapulted ecstatically into the medieval Armenia of Sergei Parajanov’s mind. As the poet Sayat Nova goes through a series of rituals depicting birth, love, creativity and death, the still, frontal camera contemplates some of the strangest and most sublime of all cinematic textures: ancient manuscripts flipping in the wind, ornate tapestries, crumbling stone prosceniums, gauzy veils and cherubs with taped-on wings, ad infinitum, ad gloriam﻿. The imagistic piling-up of folklore, documentary and reverie is otherworldly, its hyper-concentrated aesthetic joy as immediate as its narrative meaning is subterranean. (Even presenter Martin Scorsese admitted to not being wholly sure of what the film is about.) It occurred to me that Parajanov was roughly Robert Altman’s age—can you imagine thirty films like this, Danny, one per year? “The world is a window,” so goes an incantatory refrain; stepping out of this masterly pageantry, I was ready to head home with my eyes and my heart full.

Looking forward to your thoughts, my friend. It’s been a true and deep pleasure.