The Criterion Collection's recent releases of Chantal Akerman's early work have given me my first opportunity to see many of the films that established her reputation. The most lauded—Jeanne Dielman, 23 Quai du Commerce, 1080 Bruxelles (1975); Je, tu, il, elle (1976); and News from Home (1977)—more than live up to their reputations, but it's the feature film she made immediately after News, Les rendezvous d'Anna (1978), that has most piqued my curiosity. This post will be the first in an on-going series of brief essays that attempt to describe why a particular sequence or image generates an unexpected frisson in the viewer, or how a particular moment represents in concentrated form the larger formal or thematic interests of the film. Pedantry aside, Girish recently provoked a fair amount of discussion about the "small, striking moments" in films. That's what I'm after here. We'll see if it works.

THE IMAGE IN QUESTION 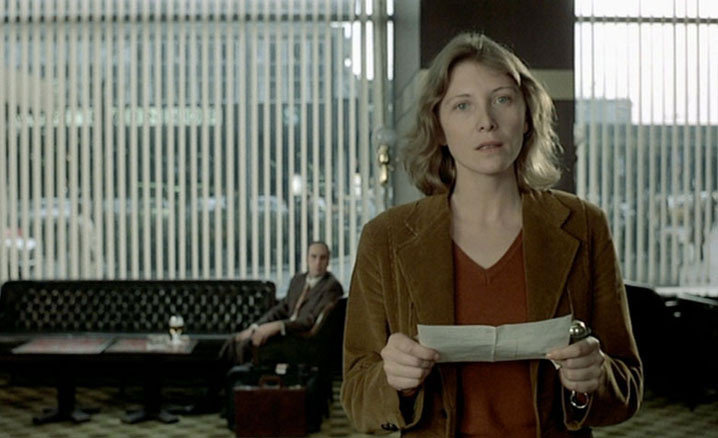 This is the fourth shot in Les rendez-vous d'Anna. Aurore Clément stars in the title role as a young filmmaker who, as the movie opens, is arriving in Germany to attend a screening. In this shot she is checking into the first of the three hotel rooms in which she'll stay during her trip back to Paris. Like Akerman at the time, Anna is in her late-twenties, a Belgian who is attempting to make a home in France. The autobiographical parallels are difficult to ignore, particularly because Les rendez-vous d'Anna is so much of-a-pair with Je, tu, il, elle, in which Akerman herself plays the lead character, Julie. Julie's encounter with the truck driver, and the long, unbroken monologue he delivers, serve as a kind of structural template for Anna, in which Clément acts as a mostly-passive sounding board to the friends, family members, and strangers she meets along the way.

Although it's only the fourth shot, the image of Anna at the hotel comes nearly five minutes into the film (if we include the opening titles in the run time). Les rendez-vous d'Anna continues the trend in Akerman's early work of combining long shot durations with static, precisely symmetrical compositions. The following are the first three shots and their durations:

The medium shot of Anna staring just beyond the camera is startling, first of all, because it breaks two "rules" Akerman establishes in the shots that precede it. While Anna appears in each of them—and at progressively nearer distances—the 90-degree cut to Anna's face brings us closer (in every sense of the word) to the character than we might have expected, especially given the self-consciously long (duration and depth) shot that opens the film. Even more striking, though, is the sudden break of symmetry, which is the visual equivalent of a time signature change in music.

To continue the music metaphor (and I think it's a useful one), Akerman's attention to symmetry is a rhythmic theme that she varies playfully and with remarkable complexity throughout Les rendez-vous d'Anna. I especially like these images, which are two of only a handful of shots that move off of the 90-degree axes. Here, we're at about 45 degrees, and Akerman has used the physical space to neatly divide the frame.

My enthusiasm for this film began with the realization that I was so emotionally involved with it because of Akerman's formal control. I occasionally have exactly the opposite response with narrative filmmakers who so precisely stage each frame (Roy Andersson comes to mind; Kubrick can also leave me cold). A friend suggested that the difference is Akerman's anthropologist-like curiosity—that each composition illustrates her genuine and affectionate attempt to better understand what she's looking at. That's certainly true, but I think the more important factor is that when Akerman cuts to that shot of Anna's face for the first time, we enter a subjective space. It's quite a trick. Only rarely does Akerman employ classic techniques for establishing a character's subjective point of view: there are three or four cuts on eyeline matches when Anna looks out the window of her train car, and in her first hotel room, the sound of the radio gradually becomes drowned out by the noise of passing traffic, despite Anna having already closed the window (presumably we hear the sounds Anna is more attentive to).

Akerman's trick is maintaining that subjectivity throughout the course of the film, while simultaneously standing at a distance and pulling the strings. Scroll back up to the first image and note the man in the background. Note how his body is leaning into Anna and how he's staring at her.

I'm not prepared to argue the case for "Anna as a feminist text," but the move to a subjective perspective clearly colors that first sequence of shots: 1. Anna walks alone through the hotel doors, 2. Anna has a typical exchange with a hotel clerk, who is as far as we know, the only other person in the lobby, 3. Anna is being watched. Given the composition of the shot, we read the stranger as forcing himself into Anna's space (they are battling it out for the center axis), so we expect her to feel his gaze, which she soon does. She turns toward him, causing him to avert his eyes, lean forward to grab his drink, and relinquish a bit of breathing room to her. When Akerman cuts next to a medium-long tracking shot, we discover that the stranger is one of several men who are watching her.

This double-ness—this sense of being both inside and outside of Anna's perspective—can be felt throughout the film. One of the more interesting examples comes soon after the first monologue. Anna has been invited home by a man she met the night before. He wants her to meet his mother and daughter; he tells her a brief history of his family home and explains how and why his wife left him. Akerman literally centers the frame on Anna and expresses the character's uncomfortable aversion to domestic life by eliding in a single, nifty, 180-degree cut everything that happens inside the house.

THIS IS A HORROR FILM, RIGHT?

The doubled perspective also lends Les rendez-vous d'Anna a quality that I can only describe as...well...creepy. The standard critical line on Akerman is that she is a poet of transience and displacement, that her rootless characters are haunted by the always-present specter of historical trauma. By those standards Anna could be Exhibit A. Made barely thirty years after the end of World War II, and taking as its central plot device a train journey between Germany and France, the film struggles to make sense of a post-Holocaust world. Order is too unstable, rationality is not to be trusted, the horror is always just right there. History dissolves completely during Anna's late-night trip to Brussels, when, by stepping from one train car to another, she seems suddenly to have become a passenger bound for the camps. It's a terrifying sequence.

The strangeness of that first shot of Anna's face, then, can also be attributed to her entrance into a liminal space. The hotel lobbies, hallways, train stations, and platforms where we most often see her are all public, nondescript, and well-traveled places. I'm reluctant to stretch this idea too thin, but I think the case could be made that Anna is a vampiric figure. She enters only one home during the film, and it's at the owner's invitation. (It's interesting that Akerman also elides Anna's film screening, which would have been a kind of home away from home.) The majority of the movie takes place after dark, and Anna's most intimate and revealing moments—her conversation with her mother and the song she sings to Daniel—both occur late in the night and seem to be forgotten and alien to her the next morning. When she finally returns to her apartment, it's dark, lifeless, and unnaturally silent (this is, as I recall, the only scene without ambient noise of passing traffic).

Like I said, the vampire analogy snaps pretty quickly, but it's a useful model for the not-quite-fully-present state in which Anna seems to exist. "Anna, where are you?" Akerman's voice asks in the penultimate line of the film.