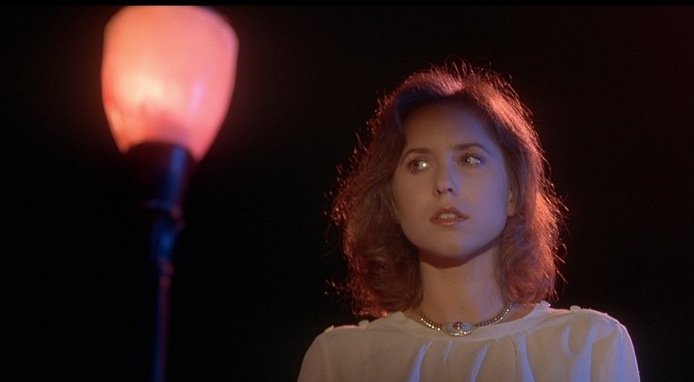 I first saw Dario Argento's Inferno back in the mid-80s, when being disappointed by a Dario Argento movie meant something entirely different than what being disappointed by a Dario Argento film means today. The ostensible sequel to 1977's groundbreaking Suspiria, the ostensible second installment of a trilogy concerning the "Three Mothers," a wannabe-mythological conceit on which Argento hoped to hang epic international horrors, the 1980 Inferno had been backed by 20th Century Fox, the American studio also behind Suspiria. It got a tiny theatrical release that I completely missed, and was then shelved for quite some time, reaching this writer in video form just as he was also acquiring his Japanese laser discs of such Argento delights as the too-baroque 1982 post-slasher film Unsane a.k.a. Tenebre.

My disappointment with Inferno at the time had to do with its seeming less like a sequel to Suspiria than a mere retread of that film. Attractive young American actress in the lead? Check. Incomprehensible plot line that's not at all clarified by arbitrarily-placed narration? Check. Stately, garishly-lit quasi-deco building façades? Check. Frantic, unpleasant cab rides? Check. Red, blue, and pink gels on pretty much every light source? Check. And so on. Of course, Inferno did have one pretty spectacular set piece front-loaded, a scene in which attractive American lead actress Irene Miracle (that's her above, in a screen grab from the Home Cinema Choice website; the below image is also from that source, many thanks) swims around a submerged old ballroom trying to retrieve a key that leads to...something wicked. But this seemed, at least to me at the time, like weak tea next to Suspiria's maggots or Unsane's ferociously tasteless lesbian-killings or that monkey in Phenomena.

Like I said, being disappointed in a Dario Argento movie was different then. Then, it was because one thing was not as galvanizing as a prior thing. Now, it's more like you look at a Dario Argento movie and think, "Good God! Did this guy EVER know how to direct a film? Was I an idiot for holding his stylized work in such high esteem all these years? The Card Player? Really?" This means, among other things, that a picture such as Inferno is a great pleasure for me to revisit, because it really is, as Argento stuff goes, pretty damn good after all. One of the things that makes it good is the fact that there's barely any dialogue for the first twenty minutes, and not much more in the next 90 or so; the narrative is so truly slender and the concern for exposition so minimal that I'm not even sure we learn our lead character's name at the outset. In "normal" films, this would be a liability; in Argento films it's just part of the allure. Martin Scorsese once described his attraction to the films of Mario Bava thusly: "I...like Bava's films very much: hardly any story, just atmosphere, with all that fog and ladies walking down corridors—a kind of Italian gothic. I could just put them on loops and have one going in one room in my house, one going on in another..." Inferno is, among other things, a kind of realization of a Bava loop (Bava himself worked on some special effects for the film), its meanderings and irrationalities—such as the appearance of this young woman in the middle of a headphone-driven music-appreciation class interrupted by a windstorm (because that happens all the time)—combining to create the most genuinely surreal feel of any Argento film, surpassing even Suspiria in this respect. 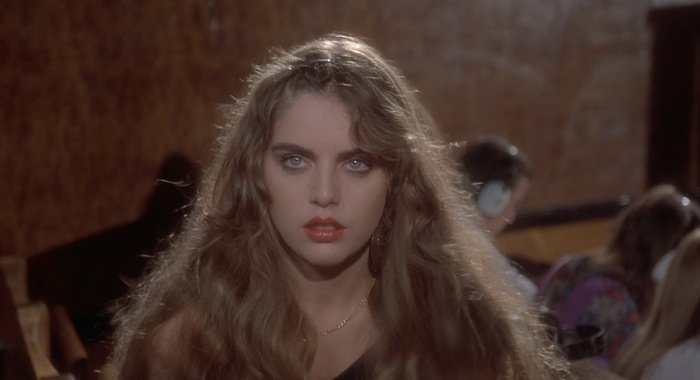 The woman is played, by the way, by Ania Pieroni, who's the first victim in Tenebre. In one of the many nice little extras that adorn the rather elaborate Blu-ray disc and DVD edition of this, Argento explains that the unheard words that Pieroni speaks to male lead Leigh McCloskey (a real made-for-TV stiff with a made-for-TV 'stache, in a role originally intended for—no, really—James Woods) are among the film's many "secrets," which some cynics might construe to mean that even he doesn't know what they are. But then again, as Argento's ex and frequent co-star of the period Daria Nicolodi points out in another interview, the idea of "the three mothers" doesn't originate with Argento, or with Nicolodi, but rather kinda sorta with Thomas De Quincey, who mentions them, no doubt in reference to some quaint and curious volume of ancient lore, in his Confessions of and English Opium Eater. (Wonder if they turn up in Anatomy of Melancholy?)

The Blu-ray from the gratifyingly obsessive U.K. concern Arrow features a gorgeous transfer of the the film. This is both a thrill and a relief, as the first Argento Blu-ray to come out of the U.K., of the aforementioned Suspiria, was a rather bitter disappointment. You'd think with a picture as delirious as that one, it would be impossible to forge a transfer that was, so to speak, too hot; and yet Nouveaux Pictures/CineExcess did just that, turning out a high-definition mess of incorrect color values. Inferno here looks as it should look, and, more or less, as Suspiria should look; one rather wishes that Arrow were in charge of high-def digitizing the Argento oeuvre entire. In good news for American cultists, the Blu-ray and the features on it seem to be region-free; the second disc of extras is standard def and region-0 PAL.