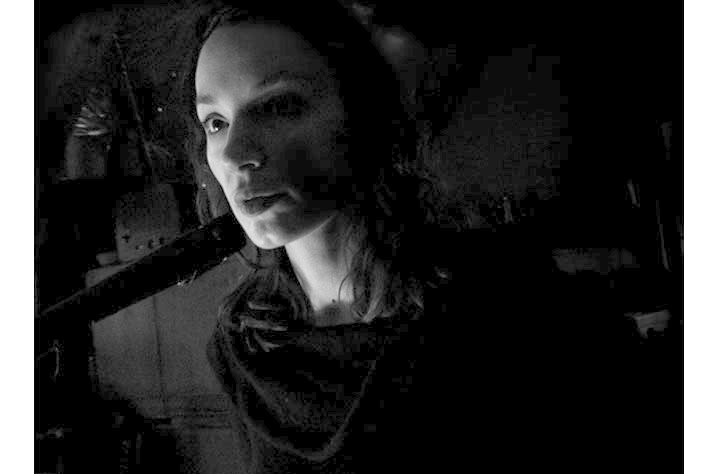 Ne change rien opens this evening for a two-week run at New York's Anthology Film Archives. Keith Uhlich in Time Out New York: "In this captivating black-and-white documentary portrait, Portuguese auteur Pedro Costa (Colossal Youth) follows the French performer Jeanne Balibar while she records a drone-rock album and readies for a production of Jacques Offenbach's comic opera La Périchole. The actor-singer is mostly photographed in canted chiaroscuro, face half-hidden in darkness, or in a deep-focus long shot, her slender and sultry figure writhing slowly in the distance. It's as if she's addressing us from the void."

"Mr Costa, who has cited Jean-Luc Godard's Sympathy for the Devil (a/k/a 1 + 1) as an inspiration for this film, has no interest in providing the expected documentary elements," writes Matt Zoller Seitz in the New York Times. "He says nothing about the life or career of Ms Balibar, who is the daughter of the physicist Françoise Balibar and the French Marxist philosopher Étienne Balibar and who has acted for Jacques Rivette (The Duchess of Langeais) and Olivier Assayas (Clean), among other notable directors. The film leaves biography, filmography and discography to Google and Wikipedia. Ne change rien is about the work, the mix of inspiration and hard labor that performers draw on from moment to moment, an alchemical event that cinema rarely shows."

A few weeks ago, Chris Fujiwara posted his program notes for the Japanese release: "From the beginning, we don't know where we are, because of the strangeness of the camera angle and the lighting.... The rigorousness of Ne change rien lies in preserving our distance. The film does not pretend to offer a simulated or reconstructed experience, some surrogate closeness or wholeness, something visual and active for the viewer to participate in. Instead, there is this repeated gesture of closing the space, pouring darkness and light into the space so that it appears unreal and inhospitable.... Ne change rien is, in part, the exploration and documentation of musical structures that exist in some form apart from the process." 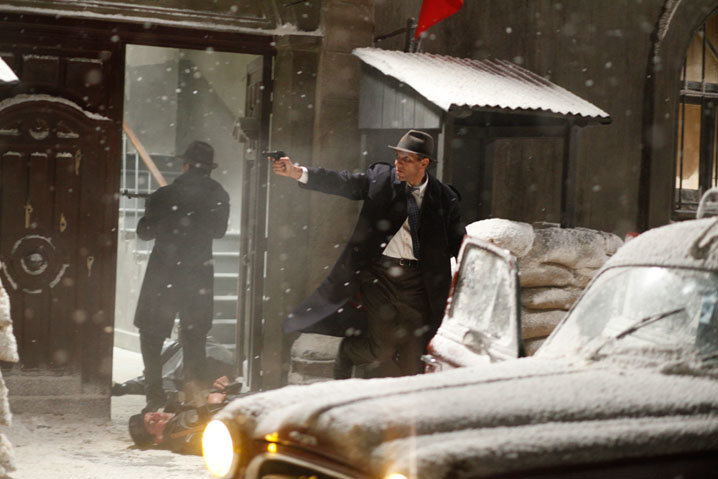 "Revolution is messy stuff, full of hands-on acts of violence, considerable moral compromise, and nearly immeasurable personal sacrifice, but sometimes there's simply no other way to achieve one's legitimate ends," writes Andrew Schenker in Slant. "Such was the case with the Algerian independence movement spearheaded by the Front de Libération Nationale (FLN) from 1954 through 1962 and documented in hot-blooded detail in Rachid Bouchareb's fictionalized account of the struggle, Outside the Law. While spanning nearly four decades of 20th-century history and focusing on the actions of three brothers of various levels of revolutionary commitment, Bouchareb's film, at least initially, seems to have the makings of a conventionally plotted epic too tastefully executed to bring home the urgency of past events to the historically distanced viewer." Ultimately, though: "Placing his considerable action chops in the service of politico-historical filmmaking, Bouchareb builds scenes of revolutionary activity into sustained, legible chaos that occasionally produces dazzling results."

But Nick Pinkerton, writing in the Voice, is not won over in the end: "Saïd (Jamel Debbouze) is the black sheep, while lanky and remorseful big-brother Messaoud (Roschdy Zem), a veteran of the French military embarrassment in Indochina, serves as triggerman for true believer Abdelkader (Sami Bouajila), channeling his everything to the cause. Outside the Law, sympathetic to that cause while not ignoring the human cost, belaboring a parallel between FLN activity and the French resistance, and alleging extralegal terror by the Paris police, stirred up a polemic kerfuffle with some in France and was greeted as a necessary historical corrective by others. Necessary, that is, if movies are only ideological counterbalances — an uncommitted American viewer may be most distressed to find that scarcely one scene in this two-and-a-half-hour lug has any contour or tempo. The production design is nice enough, but Bouchareb's four-country co-production isn't an epic — it's just long."

"New York plays host to dozens of film festivals great and small," writes Eric Hynes in the Voice, "so it's hard to make room — psychic or practical — for yet another. And considering a climate of prolonged recession that has led other festivals to shut down, scale back, or rethink their mission in a movie culture that's deathly afraid of risk and desperately grasping at 3D straws, expansion seems more than a little unwise. 'Our attitude was: Those cautions be damned,' says Thom Powers, the artistic director of DOC NYC, a new documentary festival that opens on [today] and runs through November 9. 'There's so much vital filmmaking happening that, culturally, we can't afford to contract.' It's the first local festival to focus exclusively on documentary film since the short-lived DocFest fizzled 10 years ago, restoring to the epicenter of independent filmmaking what other cities have in the Hot Docs (Toronto), SilverDocs (Silver Spring) and Full Frame (Durham) surveys."

For Chris Cabin, writing in Slant, "DOC NYC is less a primer for how the documentary form has come along in the century or so it took to get from the Lumiere brothers' L'arrivée d'un Train à La Ciotat to Michael Moore's morbidly wrong-headed Fahrenheit 9/11 than it is a survey of what has been popularized by the genre. Seeing as it was negligibly absent from the lineup of this year's New York Film Festival, something like I Wish I Knew, the latest hybrid film from Jia Zhangke, would have made a provocative and fascinating statement on how the rules that once dictated the documentary form have been reappraised over the decades. But the festival, which counts Mr Moore and Barbara Kopple among its board of advisors, has begun with baby steps, sticking with those films that purport to depict reality with what has been decided to be a sufficient aggregate of purity."

Also in Slant, Ed Howard finds Cave of Forgotten Dreams to be "as entertaining and thought-provoking as any Herzog documentary inevitably is." Blogging for the New York Press, Leslie-Stonebraker recommends Errol Morris's "fantastically entertaining" Tabloid. The L's Mark Asch talks with Robert Greene about Kati with an I. More interviews with Thom Powers: Mary Anderson Casavant (Filmmaker) and AJ Schnack.

OTHER FESTS AND EVENTS 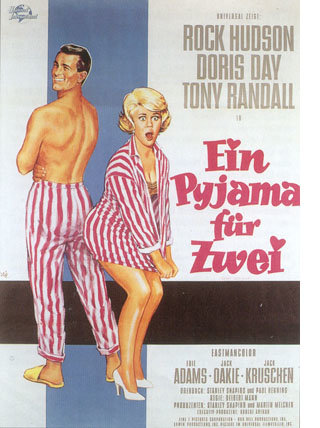 "One of the great New York movies, the 1949 musical On the Town speeds along with the pent-up excitement of three sailors — played by Frank Sinatra, Gene Kelly and Jules Mushin — on shore leave. The classic was, amazingly, the directorial debut of Stanley Donen, who at 25 was only three years from setting a new standard for the musical genre in the postwar era with 1952's Singin' in the Rain." Nicolas Rapold talks with the director for the Wall Street Journal because The One, the Only Stanley Donen opens today at New York's Film Society of Lincoln Center and runs through next Wednesday.

And here's Melissa Anderson for Artforum: "Jean-Luc Godard memorably hailed The Pajama Game, George Abbott and Stanley Donen's exhilarating 1957 movie musical, as 'the first left-wing operetta.' The first, and maybe the only: The film, an adaptation of the hit 1954 Broadway show, centers on labor unrest at the Sleep-Tite Pajama Factory, whose employees are threatening to strike if their demand for an hourly seven-and-a-half-cent raise isn't met. The Pajama Game, a Bob Fosse–choreographed paean to worker solidarity made during the decade when union membership in the US was at its peak, takes on particular poignancy when seen in today's era of outsourcing and permalancing."

Update: Scott Feinberg presents "audio excerpts of my conversation with Donen — one of only two men to have directed both Fred Astaire and Gene Kelly (the other being Vincente Minnelli) — about the most memorable song-and-dance numbers that he has overseen over the course of his eight decades in the business, accompanied by YouTube clips of them."

"The Bay Area's indefatigable fall film festival marathon continues this week with 3rd i's San Francisco International South Asian Film Festival," writes Michael Hawley, introducing his preview. "Now in its eighth year, the festival is the oldest of its kind in the US. The 2010 line-up is comprised of 15 programs (14 features and one collection of shorts), representing the latest in South Asian independent cinema from India, Pakistan, Bangladesh, Sri Lanka, the UK and USA. For preview trailers of nearly the entire program, take a look at 3rd i's YouTube channel.... For two additional perspectives on this year's 3rd i, I strongly recommend reading Frako Loden's preview at The Evening Class and Sandip Roy's over at SF Gate."

The Boston Jewish Film Festival opens today and runs through November 14. Peter Keough has a thorough overview in the Phoenix.

"Screenwriter Monica Johnson, a frequent collaborator with Albert Brooks who co-wrote many of his best films, died [Monday] of esophageal cancer," writes Sean O'Neal at the AV Club. "Johnson got her start writing for TV shows like Mary Tyler Moore (where she nabbed an Emmy), Laverne & Shirley, and It's Garry Shandling's Show. Her screenplays with friend Albert Brooks include Real Life, Modern Romance, Lost in America, Mother and The Muse (with a polish on The Scout), with Johnson supplying a much-needed feminine (though no less neurotic) voice to counterbalance Brooks's often-acerbic explorations into the relationships between men and women, as well as just generally being funny in her own right."

Listening. Back in 1996, Brooks spoke in a radio interview about his collaboration with Johnson.

John Francis Lane in the Guardian: "Though an enterprising film producer, often ahead of his times, Alfredo Bini, who has died aged 83, is best remembered for having given the poet Pier Paolo Pasolini the chance to make his debut as a filmmaker with Accattone (1960), when no other film company was prepared to back it. Bini produced more than 40 films, including all the features made by Pasolini up until 1967, including Il Vangelo Secondo Matteo (The Gospel According to St Matthew, 1964). Among his other films were many starring his wife, Rosanna Schiaffino."