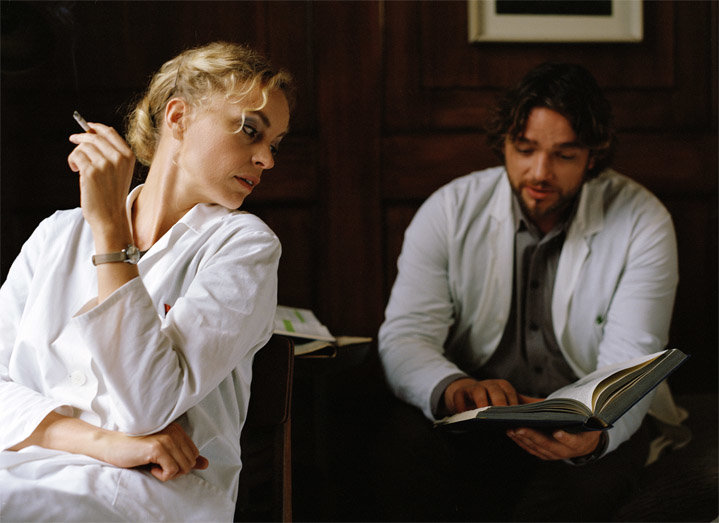 Petzold's style is practical, but it never comes off as overly utilitarian or understated, in part because every shot and cut feels invested with a sense of purpose. Like Kiyoshi Kurosawa, Petzold is a genre director whose work eschews conventional devices and techniques; his films, essentially thrillers, operate by never giving a viewer cues—visual, musical, or tonal﻿﻿—﻿as to what sort of film they're watching. His plots read like pulp but play like natural, logical developments of the setting and characters.

Case in point: Petzold's newest﻿—﻿﻿and arguably finest—﻿﻿film, Barbara. Set in East Germany during the summer of 1980, the film opens with the title character (Nina Hoss, Petzold's steely muse) arriving for her first day of work at a provincial hospital. She is a few minutes early; instead of going in, she sits down to smoke a cigarette in the hospital's courtyard. Two men are watching Barbara from a window: her handsome soon-to-be colleague André ﻿(Ronald Zehrfeld﻿) and the middle-aged Stasi officer Schütz﻿ (Rainer Bock, a longtime stage actor who has recently become ubiquitous in film).

With an enclosed-rhyme quatrain of shots—﻿a wide shot of Barbara followed by a close-up of André, which then cuts to a closer shot of Barbara and then a wide shot of André ﻿and Schütz﻿—Petzold establishes the underlying dynamics of the film. André﻿ is drawn to Barbara; his first lines of dialogue are all questions about her. He is also clearly working with the Stasi, who are keeping Barbara under surveillance because they (correctly) suspect that she is planning to escape to the West.

The central question about André﻿—﻿which Petzold spins into suspense—﻿isn't whether he's an informant, but rather how faithful of an informant he might be. While Barbara and André﻿﻿ navigate their mutual attraction / suspicion, both also become personally invested in patients who function as doubles for the doctors: she is drawn to a young woman (Jasna Fritzi Bauer﻿) who catches meningitis while trying to escape from a work camp; he to a young man (Jannik Schümann﻿) who has survived a suicide attempt. Their hospital becomes a locus of decision-making—a space where every action is informed, to varying degrees, by the conflicting needs of medical duty, self-preservation, and life in a police state.

It's suspense by induction rather than coercion. Aided by a vivid soundscape (discussed at length in Daniel Kasman and David Phelps' interview), Petzold draws the viewer into Barbara's (and, by extension, Barbara's) world. The shrill metallic doorbell of Barbara's apartment becomes an ill omen. ﻿The radio in the hospital break room—﻿piping in enthusiastic coverage of the Moscow Olympics—﻿﻿becomes a reminder of the culture within which these exiled big-city doctors (unlike their intentions, Barbara and André﻿﻿'s sense of duty to their patients is never suspect) operate. The whistly countryside wind suggests an impersonal, ambiguous wilderness existing just outside the bounds of their orderly lives.

Objects—﻿﻿﻿like the wad of cash Barbara will use to fund her escape or the fat-tired bicycle she uses to get around—﻿﻿﻿﻿develop ﻿﻿﻿﻿﻿dramatic significance through recurrence rather than conventional emphasis. Casual details develop into major points of suspense. A sequence where the Stasi ransack Barbara's apartment, for instance, is taut not because of any kind of visual or musical push (aside from the credits, the film features no non-diegetic music), but because the viewer knows—﻿﻿﻿﻿﻿thanks to an earlier, seemingly throwaway scene—﻿﻿﻿﻿﻿﻿exactly where and how Barbara's money is hidden.

Conventional thrillers operate by being stingy with details. Petzold does the opposite; the result is a tense, controlled film that never feels constricting.