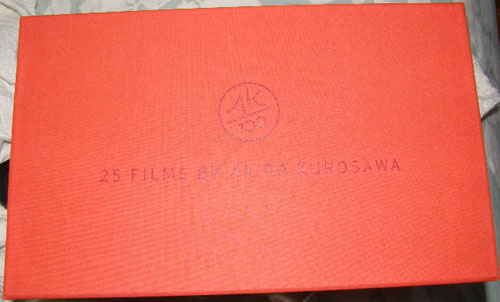 The concept behind the box is simplicity itself, exemplified by its title: "25 Films By Akira Kurosawa." This is released in commemoration of what would have been the Japanese master's 100th birthday; this fact is elegantly implied by a little logo atop the box. This logo is reiterated, with a single variation, on every single one of the 25 identically-sized DVD cases contained in the box. That variation being that the "100" is replaced by the 20th-century year in which each given film was made. Note below that the logo on The Idiot bears the logo "AK/'51." 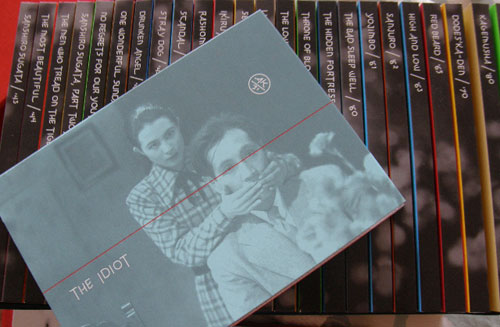 The very elegant simplicity of the package design itself, and the unerring use of simple detailing therein (that red line bisecting Masayuki Mori's eyes above is a particularly apt touch), make this an item you can contemplate for some time before popping the first DVD in. The films here are presented differently than those in the collection that have already received individual Criterion releases, most notably in that they are absent any on-disc supplemental material. What takes the place of that is a copiously illustrated book, containing an essay by Western Kurosawa expert Stephen Prince, brief, cogent notes on all the films, also by Prince, and a remembrance of Kurosawa by Donald Richie, the critic/filmmaker who was instrumental in introducing Japanese cinema to the West, specifically America.

There's that old story about the anti-loyalty-oath Director's Guild meeting where an American master introduced himself by saying "My name's John Ford. I make Westerns." Some eager novices in Japanese film appreciation could well imagine Kurosawa introducing himself by saying "I make chambara [sword-fighting] pictures." But of course, just as Ford proved a master of several genres, Kurosawa too could not be pinned down. And, as with Ford (see, in particular, the wonderful Ford at Fox set  20th Century Fox Home Entertainment released several years back), all of Kurosawa's pictures say things about each other, whether watched in genre-specific groups, by period, or just chronologically across the course of his career as a whole, which mode this set definitely encouraged. To call the journey rewarding is rather an understatement. The individual pleasures never let up, and are invariably enhanced by context. The incredible period saga of heroism and betrayal—among other things a truly intimate epic—Seven Samurai, from 1954, takes a different resonance followed by the harrowing modern tale of possibly entirely justified nuke paranoia, 1955's I Live In Fear. One gets a clearer sense of what Kurosawa's tragically mutilated adaptation of Dostoevsky's The Idiot might have been by having watched the breathtakingly coherent Rashomon first. And so on.

Also enhancing context, in multiple ways, are four of Kurosawa's earliest films, all new to domestic DVD and all made during World War II. 1943's tale of competing martial arts philosophies, Sanshiro Sugata, and its '45 sequel Sanshiro Sugata, Part Two, show a tyro almost drunk on the possibilities of filmmaking. 1944's The Most Beautiful is a would-be propagandizing war morale booster with a semi-documentary edge that tends to undercut its putative message, which Kurosawa didn't buy in any event; and 1945's The Men Who Tread on the Tiger's Tale is a period piece that's in some ways a very early dress rehearsal for Kagemusha (Kurosawa had wanted to make that story at this time, but not enough healthy horses could be found for the battles scenes!) and Ran.

Finally, all of the pictures have been newly mastered for the set. Some more extensively than others—obviously there's not going to be a heckuva lot of difference between the image quality of the films released in the January 2008 Eclipse box "Postwar Kurosawa" (No Regrets For Our Youth, One Wonderful Sunday, Scandal, The Idiot and I Live In Fear) and what's here. And yet. Here are two frame grabs from 1970's Dodes'ka-Den, released initially by Criterion in March of this year and now part of the "25 Films" box set. 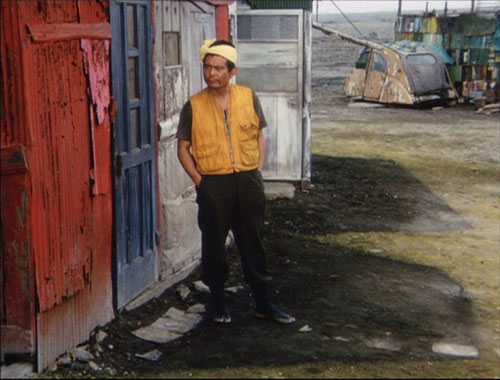 Above: the March version.

Both look good, better than good; Criterion always sets the standard in such considerations. But the new version has a very slight edge in some combo of sharpness and brightness; it's a minutely cleaner image. And, as the massive review of the box at DVD Beaver notes, none of the films in the 1.33:1 aspect ratio here have been pictureboxed—that is, presented in a black-bordered "frame" to compensate for overscan in CRT video displays, an increasing non-concern as the CRT goes the way of the dinosaur, at least as far as home video is concerned. The March Dodes'ka-Den is pictureboxed; the one in "25 Films," not.

More than an impressive consumer good, or gift idea, this is a brilliantly curated presentation, and, as with the Fox sets of Ford, Murnau, and Borzage, a genuine triumph of informed film-love. A work of art in itself.