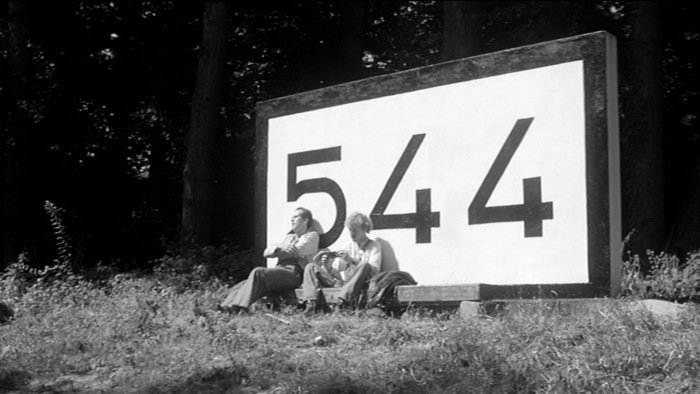 In a 20-minute interview that is one of the supplements to this excellent DVD edition (a Region 2 PAL UK set from the label Axiom) of Kings of the Road, a contemporary Wenders considers this film and all of his films prior and subsequent to it, and tries to tie them together. "All these films have in common," he says (in German), "is not a theme, but what ties them together, from this one, to Buena Vista Social Club, to Until The End Of The World, is the question: 'How should one live?''' In this case, for one of its characters, Robert (Hanns Zischler), the question might better be put, "How can one live?" He has driven his car into a river, and instead of drowning, he is left bereft of personal possessions. Including the car. Wenders knows his Kristofferson, that is, that freedom's just another word for nothing left to lose. So Robert hooks up with Bruno Winter (Rüdiger Vogler) a recurring character in Wenders' film's (Including Alice In The Cities, discussed here) and hence, maybe, Wenders' stand in? I don't know...I think in this particular picture the two characters both stand in for the filmmaker, represent certain manifestations of both his enthusiasms (Bruno in this film is employed as a travelling film projector repairman) and his vulnerabilities (Robert's a fellow who takes stuff pretty hard; his drive into the river was precipitated by the breakup of a relationship). The film asks the question "How does one live?" in a number of ways, and an answer, or at least an inferable answer, because there is no definite or definitive answer, is, through film, not just the one that is being made at the time of the shooting but the ones its various shots are evoking. Not in a clever, post-modern way but in a way that one is tempted to call "organic" if that word weren't for all intents and purposes a smokescreen for a more sentimental construct. Still, one has to admit the relative un-self-consciousness with which the below shot evokes Antonioni... 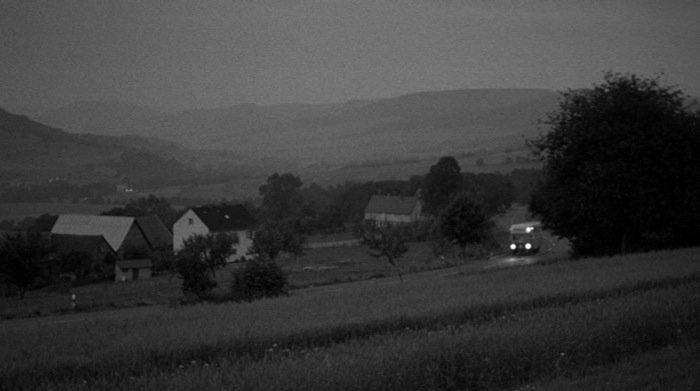 ...it wouldn't feel out of place in Il grido, don't you think? And for some reason the next shot... 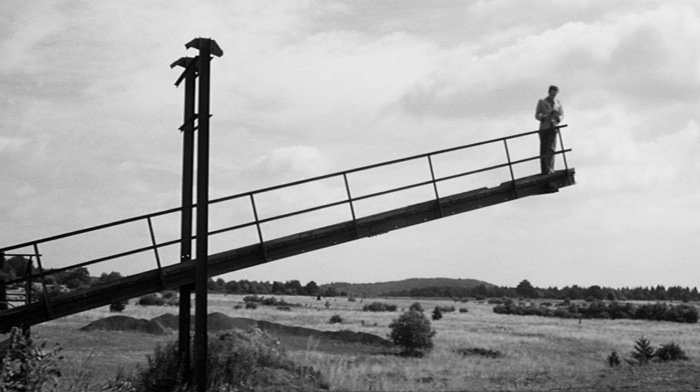 ...brings to mind, in its way, that famous shot of Michel Picolli standing on the side of a cliff in Godard's magisterial, melancholy Le mepris, also a film about living in cinema, to a certain extent.

Wenders sees a through-line in woven into his work that one supposes certain critics, with their general insistence on assessment and good and bad, don't necessarily sense; when a Wenders film goes wrong for them, it goes terribly wrong, yet one sense for him that whatever the result, it's a record of his artistic output at a particular point in time. Sometimes I hear a critic or film lover say, "I wish Martin Scorsese would go back to making personal pictures instead of this big-budget studio stuff." I understand in a sense where they're coming from, but I can't get on board with them, because more often than not what they're really saying is that they want him to make Mean Streets or Taxi Driver again. Scorsese's films, I believe, are still very personal; they do reflect the preoccupations and obsessions and aesthetic concerns of a 67-year-old American director who came out of a looser tradition than the studio system and gained some hard-earned commercial success along with a formidable reputation for mastery and volatility. His recent documentary chronicling a Rolling Stones concert, Shine a Light, is perhaps the most directly (that is, autobiographically) personal of his films in that it chronicles both Scorsese and the Stones—maverick, edgy, ostensibly "dangerous" artists in their respective youths—struggling to create meaningful work in both the wake and the midst of post-middle-age, celebrity hoopla, and oodles and oodles of money. In any event, conditions are such that it's hardly likely that Scorsese is ever going to strap a camera on his shoulder and take to the streets, as if that was ever his thing anyway.

Wenders never achieved the level of fame and wealth that Scorsese has, but he hasn't done badly, and his international cultural cachet became pretty formidable a few years after he made Kings. He, too, became someone whose personal films were directly circumscribed by circumstances involving not just fame and wealth but aging. It was the power to act on his enthusiasms that led him to cast both Peter Falk and Nick Cave in Wings of Desire, and to make Buena Vista Social Club to begin with. But still. Richard Lester, talking to Steven Soderbergh in Soderbergh's 1999 book Getting Away With It, touches on Lester's initial frustration, in the first flush of fame, at the fact that he was no longer "able to go about in the world and just be" (Soderbergh's words). "That didn't last long," Lester jokes, then elaborates:"...[B]ecause you get out of the habit of it and I think this was the same with Stanley Kubrick; it was the same with Joseph Losey; it was the same with David Lean. I think in most cases—and this is a bit sweeping and a little unfair—they become accepting of being able to be the observer on the bus, and once you've accepted that, it becomes a way of life. It's as simple as that. You don't take buses. I'm using that metaphorically, but you don't take buses, you don't put yourself into that. Joe tried. Joe always at least knew the new jazz man that was around. He always tried to keep up on music and art in a way, but it was always through a sheet of glass. I stopped trying. I cannot tell you now who are the best jazz men of the nineties, the new people to listen to. I make no effort to sit down with a Blur record and an Oasis record and see why I would like one and not the other. I have given that up. I've lost the habit and I don't think any of us get it back."

"Is that bad, do you think?" Soderbergh asks.

"Does it affect the work?"

Wenders was barely thirty when he made Kings, his fifth feature in fewer than five years. He was still relatively anonymous and bursting with a youthful energy despite the extremely articulate, well, weltschmerz he was capable of capturing on film. The observations of the film are completely plugged in, immediate. Galaxies away, it seems, from the distanced affectations of the thoroughly out-of-it 2005 Sam Shepard-scripted-and-starring ego trip Don't Come Knockin' or the earnestness-so-curdled-it-becomes-decadence fulminations of 2008's Palermo Shooting. "what happened to this guy?" one asks while watching; how could he, for example, having once coaxed out of Dennis Hopper one of the actor's most nuanced performances in 1977's The American Friend, now let Hopper do the inverse of everything wonderful he'd done in the earlier film in Palermo Shooting? And for all that, both later films are very recognizably Wenders pictures—bad ones. It's not just a matter of not taking the bus. It's a matter of being inside a bubble and not being aware of it. And yet. Directly before production on Don't Come Knockin', Wenders more or less strapped a camera to his shoulder and, working from a script by Michael Meredith, made Land of Plenty, a post-9/11 rumination that's awkward and gangly and thoroughly imperfect and for all that puts across the best of what makes Wenders Wenders, that is, it's a film of unaffected generosity of spirit. The un-self-consciousness of Kings is momentarily regained in that picture, which reminds me of another adage of mine concerning auteurs: never, ever count one out. Not even Woody Allen. You never know when he or she will surprise you again. 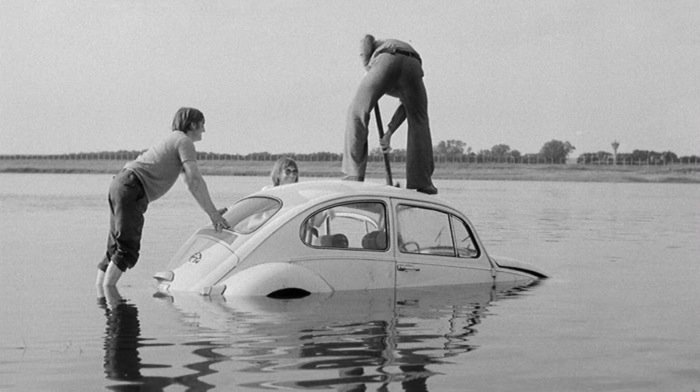 And in a way it's sad that we can no longer watch Kings of the Road without thinking these things. I do remember seeing this before I really knew or understood who Wenders was, and it was, I think somewhat before he became Wenders, so to speak. And I thought, wow, this guy's great; I cannot wait to see what he's got ahead of him. What he had ahead of him was some wonderful stuff, to be sure, and there may yet be more. But during that particular fecund period of cinema, the quality of one's anticipation was different, and one's curiosity got satisfied quicker. I mean, how long have I been waiting to see what Lynne Ramsay will do next since Morvern Callar?.... 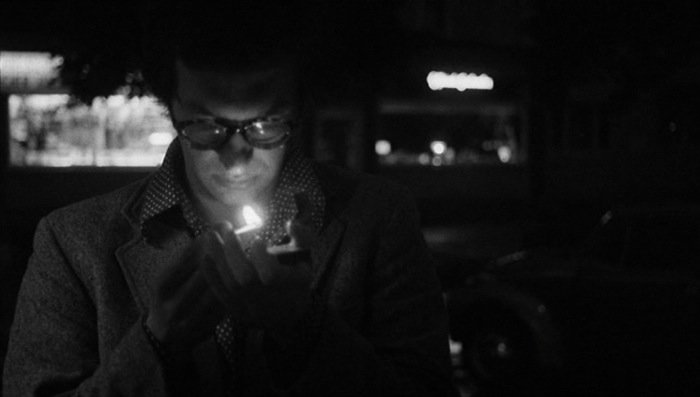